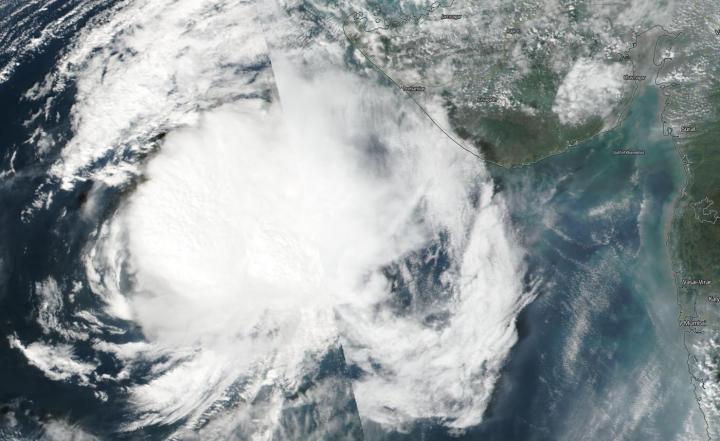 NASA-NOAA’s Suomi NPP satellite passed over the Northern Indian Ocean and provided forecasters at the Joint Typhoon Warning Center with a view of Tropical Cyclone Maha’s eroding structure that helped confirm it is weakening.

On Nov. 6, 2019, the Visible Infrared Imaging Radiometer Suite (VIIRS) instrument aboard Suomi NPP provided a visible image of Maha that showed it was less circular. Dry air was wrapping into the center of the storm inhibiting thunderstorm development. Maha appeared less circular in the imagery.

The shape of the storm is a clue to forecasters that a storm is either strengthening or weakening. If a storm takes on a more rounded shape it is getting more organized and strengthening. Conversely, if it becomes less rounded or elongated, it is a sign the storm is weakening as Maha is doing.

Forecasters at the Joint Typhoon Warning Center expect Maha to continue moving east and weakening. The system is expected to skirt the Saurashtra coast and dissipate before making landfall north of Mumbai in northwestern India.

For updated forecasts from the India Meteorological Department, Visit: http://www.rsmcnewdelhi.imd.gov.in/

Vitamin D dials down the aggression in melanoma cells

Scienmag Dec 18, 2019
Credit: Laboratory of Chromatin Biology and Epigenetics at The Rockefeller University As an embryo develops, its…

UTIA and Blühen Botanicals to collaborate on hemp production research