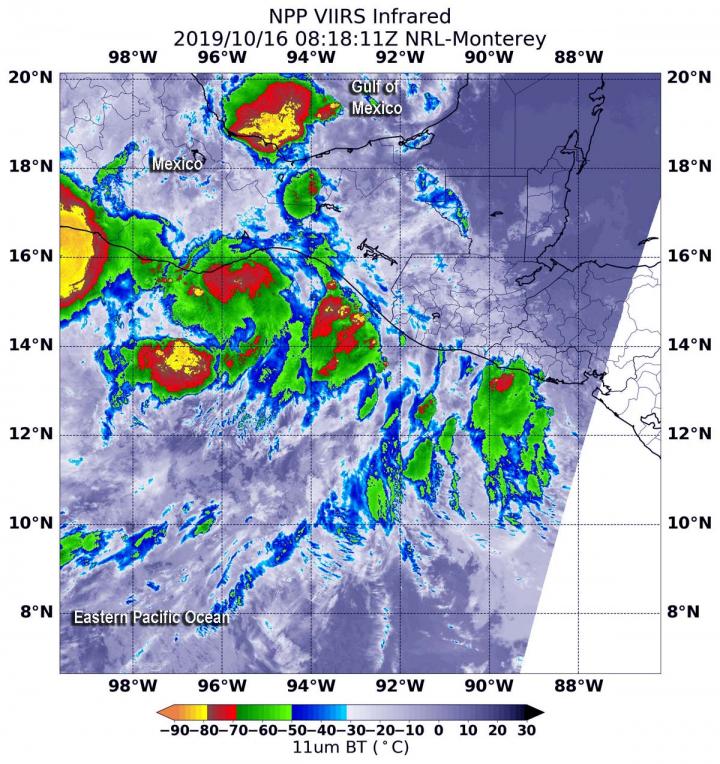 NASA-NOAA’s Suomi NPP satellite passed over Mexico and found two small areas of very strong thunderstorms near two different coastlines. One area was in Potential Tropical Cyclone 17E in the Eastern Pacific Ocean and the other was for another system developing in the western Gulf of Mexico.

Potential Tropical Cyclone Seventeen-E developed around 11 p.m. EDT on Oct. 15 and by 11 a.m. EDT on Oct. 16, the center of circulation made landfall over the Mexican state of Oaxaca.

The Visible Infrared Imaging Radiometer Suite (VIIRS) instrument aboard Suomi NPP provided an infrared image of the storm. Infrared imagery reveals cloud top temperatures, and the higher the cloud top, the colder it is, and as such the stronger the storm. On Oct. 16 at 4:18 a.m. EDT (0818 UTC), an infrared VIIRS image showed two small areas around southern Mexico where cloud top temperatures were as cold as minus 80 degrees Fahrenheit (minus 62.2 Celsius). One area, located in the Eastern Pacific Ocean is associated with Potential Tropical Cyclone 17E. Both areas with strongest storms were over water. One in the Eastern Pacific and the other in the western Gulf of Mexico. Storms with cloud tops that cold have been found to generate heavy rainfall.

At 2 p.m. EDT (1800 UTC), the disturbance was centered near latitude 16.6 degrees north and longitude 96.6 degrees west. That is about 95 miles (155 km) west-northwest of Salina Cruz, Mexico. The system is moving toward the northwest near 14 mph (22 kph), and this motion is expected to continue through tonight. Maximum sustained winds were near 30 mph (45 kph) with higher gusts.

NOAA’s National Hurricane Center or NHC said, “The disturbance is now unlikely to bring tropical-storm conditions to the coast of Mexico, although the rainfall threat continues for portions of southeastern Mexico.”

While the chances that the disturbance will become a tropical cyclone are decreasing, the NHC forecasters said there is still a small chance that a tropical depression could develop if the center can re-form along the coast later today or tonight.

The other area of strong storms seen on the Suomi NPP infrared image area is associated with a large area low pressure located just offshore of the coast of southern Mexico, in the Bay of Campeche. That low pressure area is producing disorganized showers and thunderstorms. NHC said that gradual development is possible, and a tropical or subtropical cyclone could form late this week over the western or central Gulf of Mexico while the system is moving generally northeastward. Regardless of development, this system could produce gusty winds, rainfall, and rough surf along portions of the northern Gulf Coast Friday and Saturday.