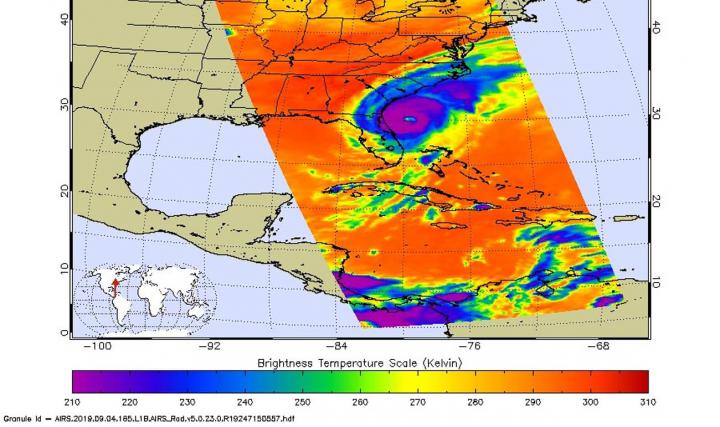 Hurricane Dorian continues to generate tremendous amounts of rainfall, and has left over three feet of rain in some areas of the Bahamas and is now lashing the Carolinas. NASA’s IMERG product provided a look at those rainfall totals.

By Thursday morning, September 5, Hurricane Dorian had dumped heavy rain on coastal South Carolina.  An even greater accumulation of over 10 inches was occurring off shore along the path of Dorian’s inner core.  In part because of Hurricane Dorian’s forward motion during the past two days, the recent rainfall totals have remained below the 36-inch accumulation observed when Dorian was stalled over the Bahamas.

NASA has the ability to estimate the rainfall rates occurring in a storm or how much rain has fallen. Rainfall imagery was generated using the Integrated Multi-satEllite Retrievals for GPM or IMERG product at NASA’s Goddard Space Flight Center in Greenbelt, Maryland. These near-realtime rain estimates come from the NASA IMERG algorithm, which combines observations from a fleet of satellites in the GPM or Global Precipitation Measurement mission constellation of satellites, and is calibrated with measurements from the GPM Core Observatory as well as rain gauge networks around the world. The measurements are done in near-real time, to provide global estimates of precipitation every 30 minutes.

Warnings and Watches on Sept. 5

NHC’s latest bulletin at 8 a.m. EDT (1200 UTC) noted the eye of Hurricane Dorian was located near latitude 32.1 degrees North, longitude 79.3 degrees West. That puts the eye of Dorian about 70 miles (115 km) south-southeast of Charleston, South Carolina. Dorian is now moving toward the north-northeast near 8 mph (13 kph).   Maximum sustained winds are near 115 mph (185 km/h) with higher gusts.  Dorian is a category 3 hurricane on the Saffir-Simpson Hurricane Wind Scale.  Some fluctuations in intensity are expected this morning, followed by slow weakening through Saturday. However, Dorian is expected to remain a hurricane for the next few days. Hurricane-force winds extend outward up to 60 miles (95 km) from the center, and tropical-storm-force winds extend outward up to 195 miles (315 km). Charleston International Airport recently reported a wind gust of 61 mph (98 kph). The estimated minimum central pressure based on Air Force Reserve Hurricane Hunter data is 959 millibars.

The National Hurricane Center forecast calls for Dorian to turn toward the northeast by tonight, and a northeastward motion at a faster forward speed is forecast on Friday.  On the forecast track, the center of Dorian will continue to move close to the coast of South Carolina today, and then move near or over the coast of North Carolina tonight and Friday.  The center should move to the southeast of extreme southeastern New England Friday night and Saturday morning, and approach Nova Scotia later on Saturday.

Michael A. Petr to present at the 6th Annual Aging Research, Drug Discovery, and AI Forum in Basel

Stevens team closes in on ‘holy grail’ of room temperature…

Dangerous pathogens use this sophisticated machinery to infect hosts