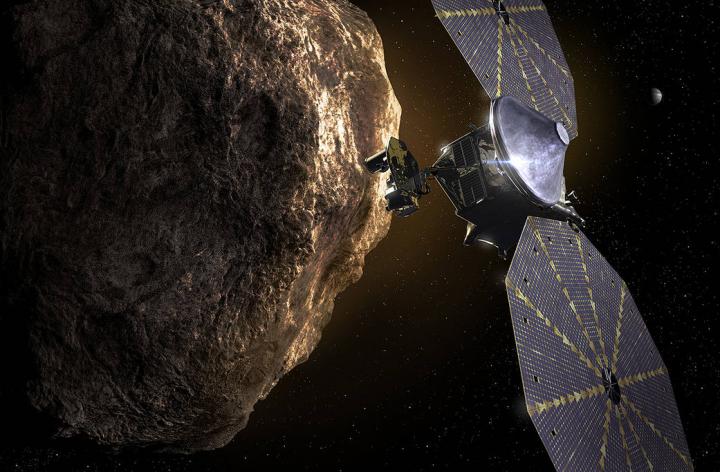 In the 1970s four spacecraft began their one-way trips out of our Solar System. As the first human-built objects to ever venture into interstellar space, NASA chose to place plaques on Pioneer 10 and 11 and golden records on Voyager 1 and 2 spacecraft to serve as messages to any alien spacefarers that may someday encounter these spacecraft. Continuing this legacy, NASA’s Lucy spacecraft will carry a similar plaque. However, because Lucy will not be venturing outside of our Solar System, Lucy’s plaque is a time-capsule featuring messages to our descendants.

As the first-ever mission to the Trojan asteroids, Lucy will survey this enigmatic population of small bodies that orbit the Sun beyond the main asteroid belt – trapped by Jupiter and the Sun so that they have led and followed Jupiter in its orbit. As these never before explored asteroids are in many ways “fossils” from the formation and evolution of the planets, the Lucy spacecraft is named in honor of the fossilized human ancestor discovered the year after Pioneer 11 began its journey out of the Solar System. Lucy’s name was inspired by the Beatles’ song “Lucy in the Sky with Diamonds.”

After Lucy finishes visiting a record number of asteroids for a single mission in 2033 (8 asteroids on 6 independent orbits around the Sun) the Lucy spacecraft will continue to travel between the Trojan asteroids and the orbit of the Earth for at least hundreds of thousands, if not millions of years. It is easy to imagine that someday in the distant future our descendants will find Lucy floating among the planets. Therefore, the Lucy team chose to put a time-capsule aboard the Lucy spacecraft in the form of a plaque, messages this time not for unknown aliens, but for those that will come after us. The plaque was installed on the spacecraft in a ceremony at Lockheed Martin Space in Littleton, Colorado, on July 9, 2021.

This time-capsule contains messages from prominent members of our society; individuals who have asked us to contemplate the state of the human condition as well as our place in the universe. These thoughtful leaders were asked to provide words of advice, words of wisdom, words of joy, and words of inspiration to those who may read this plaque in the distant future. These messages were solicited from Nobel Laureates in Literature, United States Poet Laureates, and other inspirational figures including the members of the band that indirectly inspired the Lucy mission’s name.

To date this time-capsule, the plaque also includes a depiction of the Solar System on the day of Lucy’s anticipated launch of October 16, 2021. The original trajectory of the Lucy spacecraft, traveling between the Trojan swarms and the Earth’s orbit, is shown as well.

NASA places this plaque with the hope that space exploration continues and someday astro-archeologists may travel among the planets and retrieve this spacecraft as an artifact of the early days when humanity took its first steps to explore our Solar System.

For more information on the Lucy mission visit: https://www.nasa.gov/lucy

For more information about the plaque participants visit: http://lucy.swri.edu/lucy-plaque