Scientists researching forest carnivores such as martens, foxes and coyotes spend hours clambering through rugged terrain, sometimes in deep snow, placing and baiting camera traps to learn about animals’ behavior in relation to their habitat. 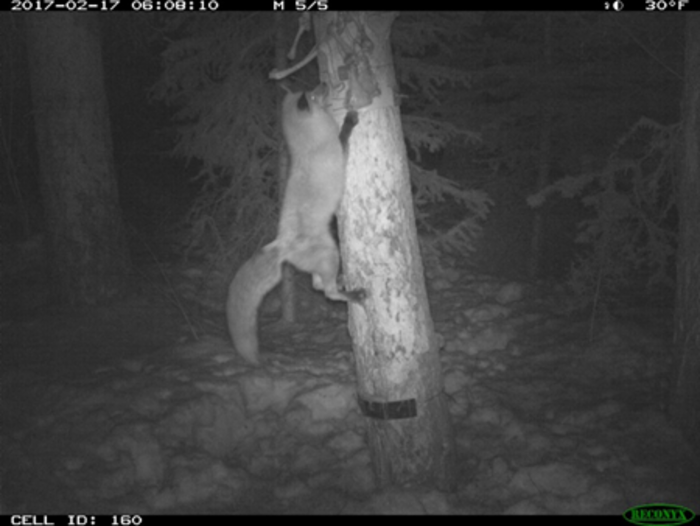 Scientists researching forest carnivores such as martens, foxes and coyotes spend hours clambering through rugged terrain, sometimes in deep snow, placing and baiting camera traps to learn about animals’ behavior in relation to their habitat.

In recent years, this on-the-ground work has received a big boost from what might seem to be an unlikely source: NASA.

In a new scholarly paper that details research in northwest Wyoming, University of Wyoming researchers explain how NASA’s Global Ecosystem Dynamics Investigation (GEDI) mission can provide valuable information about the world’s forests for wildlife scientists. The article appears in the journal Forest Ecology and Management.

Using a light detection and ranging (LiDAR) laser instrument installed on the International Space Station, GEDI collects high-resolution observations of the three-dimensional structure of Earth’s forest — including precise measurements of forest canopy height, canopy cover and vertical structure. GEDI was attached to the International Space Station in 2018 for a two-year mission that has been extended until January 2023; it is expected to collect over 10 billion samples of Earth’s tropical and temperate forests.

“Our work indicated that spaceborne LiDAR collected from the GEDI mission provided a ready sampling of forest structure that could be combined with other remotely sensed data to improve our understanding of animal-habitat relationships,” wrote the researchers, led by Austin Smith, now an assistant research scientist for the team of Assistant Professor Joe Holbrook in UW’s Haub School of Environment and Natural Resources.

Working in the greater Yellowstone ecosystem — including two national parks, parts of three national forests, one national wildlife refuge and Bureau of Land Management land — the researchers deployed 107 camera traps for three consecutive winters. Based on photographs of target species, they calculated habitat use for Pacific martens, Rocky Mountain red foxes and coyotes, along with prey species red squirrels and snowshoe hares.

The scientists then paired data from GEDI with other remote-sensing platforms to create forest height and structure maps, which they used to run computer models to evaluate animal-environment relationships. They found that the pairing of GEDI data with other sensors resulted in a substantial improvement in characterizing vertical and horizontal forest structure, which aided efforts to understand important habitat features for the animals studied.

“Our successes are likely transferrable to other landscapes and animal species, which is important given the large-scale disturbances that are occurring in Western forests, such as wildfire and bark beetle outbreaks,” the researchers say.

Spaceborne LiDAR and animal-environment relationships: An assessment for forest carnivores and their prey in the Greater Yellowstone Ecosystem