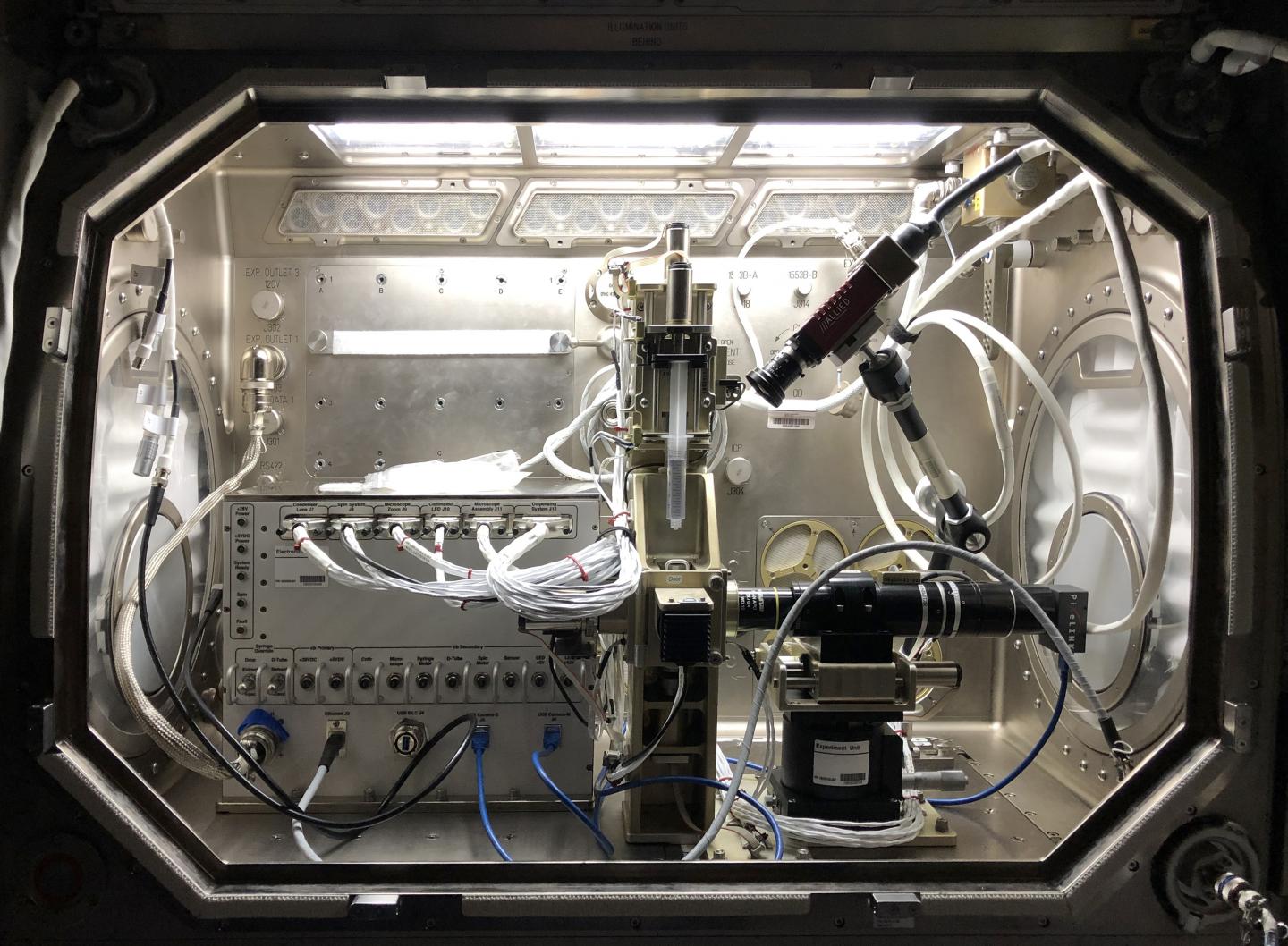 An innovative experiment underway on the International Space Station could help researchers make new progress in the fight against aggressive neurodegenerative diseases such as Alzheimer’s and Parkinson’s.

The Ring-Sheared Drop experiment, developed and led by Teledyne Brown Engineering of Huntsville, Alabama, will be housed in the station’s Microgravity Science Glovebox to enable study of the formation of potentially destructive amyloid fibrils, or protein clusters, like those found in the brain tissue of patients battling neurodegenerative diseases. Such illnesses may cause neurons, the drivers of the human nervous system, to become damaged or inoperative.

Normal brain functions may be disrupted by amyloid fibrils. These proteins can denature — or lose characteristic properties — and precipitate out of solution. As they accumulate over time, they may disrupt the healthy function of tissues and organs. In cases of brain function and diseases such as Alzheimer’s, that disruption can be profoundly debilitating and even fatal.

“This project is a prime example of the amazing discoveries and advancements possible with partnering between NASA, research and industry,” said Jan Hess, president of Teledyne Brown. “Our hope is that this experiment brings the scientific community closer to unlocking the mysteries of this life-altering disease that affects so many people worldwide every day.”

In Earth-based experiments, researchers determined that amyloid fibrils may be created by shear flow, or the difference in flow velocity between adjacent layers of a liquid. In the case of ground experiments, that formation is affected by the presence of container walls and by convection, or the circular motion that occurs when warmer liquid rises while cooler liquid descends.

The goal now is to conduct experiments in microgravity — in a containerless reactor — where the liquid specimens form spherical drops, containing themselves via surface tension. Researchers will “pin” a droplet of liquid between two rings and cultivate amyloid fibrils for study.

“Experimentation in microgravity affords the opportunity to study amyloid fibril formation under conditions that eliminate unwanted effects such as contact with solid walls which can affect the results of normal laboratory experiments,” said Kevin Depew, a researcher in the ISS Projects Office, part of the Human Exploration Development and Operations Office at NASA’s Marshall Space Flight Center in Huntsville. “The team has worked very hard and we are expecting a great return.”

The project partners, led by principal investigator Amir Hirsa at Rensselaer Polytechnic Institute of Troy, New York, also seek to extend the value of their innovative experiment hardware for other uses, adapting the Ring-Sheared Drop facility as a space-based bioreactor, customizable for other fluid studies or to grow and study cells, bacteria, algae and other materials.

The experiment was launched to the station in July on a SpaceX commercial resupply services mission. Experiments began in September, and the study is expected to continue at least two years. Under contract to Marshall, Teledyne Brown developed the hardware with funding from the Space Life & Physical Sciences Research & Applications Division of NASA’s Human Exploration & Operations Mission Directorate. Rensselaer Polytechnic Institute and Emerald City Initiatives of Huntsville also partnered on the project. Marshall manages the Microgravity Science Glovebox for NASA.

Stalled weather patterns will get bigger due to climate change

Ancient bone protein reveals which turtles were on the menu in…