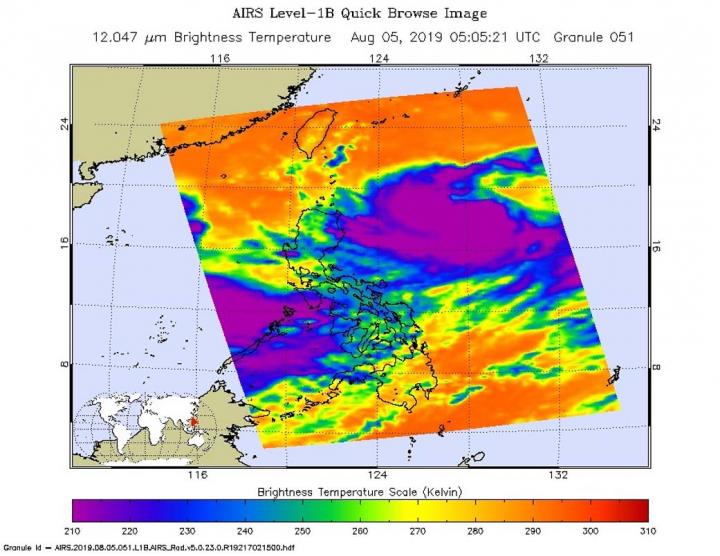 NASA’s Aqua satellite gazed into Tropical Storm Lekima as it moved through the Philippine Sea on August 5 and the AIRS instrument aboard took the temperature of its cloud tops to estimate storm strength.

Lekima formed early on Aug. 4 as Tropical Depression 10W and strengthened into a tropical storm on Aug. 5, when it was renamed Lekima.

NASA’s Aqua satellite passed over Lekima on Aug. 5, at 0105 a.m. EDT (0505 UTC). The Atmospheric Infrared Sounder or AIRS instrument aboard NASA’s Aqua satellite analyzed Lekima in infrared light and found cloud top temperatures of strongest thunderstorms as cold as or colder than minus 63 degrees Fahrenheit (minus 53 degrees Celsius) were wrapping into the low-level center from the south. Cloud top temperatures that cold indicate strong storms that have the capability to create heavy rain.

Strongest storms extend high into the troposphere and have very cold cloud top temperatures as cold as or colder than minus 63 degrees Fahrenheit (minus 53 degrees Celsius).

At 5 a.m. EDT (0900 UTC), the center of Tropical Storm Lekima was located near latitude 19.2 degrees north and 129.5 degrees east longitude. Lekima’s center is about 456 nautical miles south-southeast of Kadena Air Base, Okinawa Island, Japan. It was moving to the northwest and had maximum sustained winds near 35 knots (40 mph/64 kph). In the Philippines, Lekima is called Hanna.

The Joint Typhoon Warning Center forecasts that Lekima will move northwest and make landfall over northern Taiwan on Aug. 9, then make a final landfall in mainland China.

Geoengineering versus a volcano

Scienmag Oct 28, 2019
The McLean Hospital Brain Bank is proud to be 1 of 6 brain banks that are part of the NIH NeuroBioBankCredit:…

Common nutrient supplementation may hold the answers to combatting Al