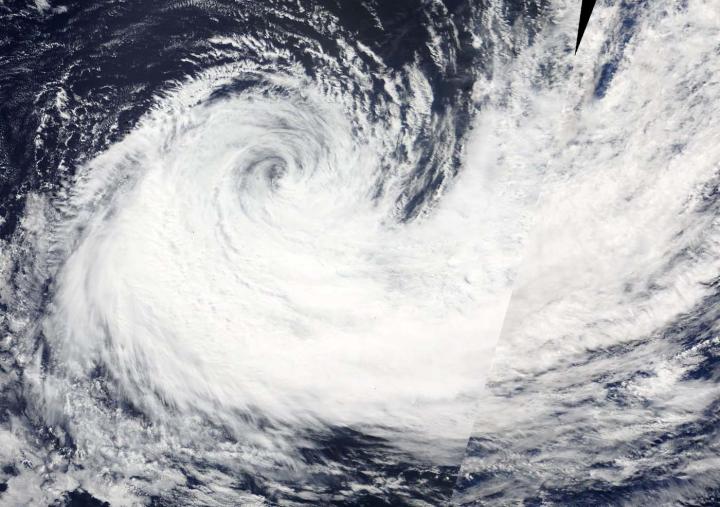 Visible imagery from NASA’s Terra satellite revealed northerly wind shear affecting Tropical Cyclone Haleh and continuing to weaken the storm.
On March 9 the Moderate Resolution Imaging Spectroradiometer or MODIS instrument aboard NASA’s Terra satellite provided a visible image of Haleh in the Southern Indian Ocean. The image showed the northeastern quadrant surrounded by wispy clouds, while the bulk of clouds and showers were pushed south and southwest of the center of circulation. Haleh also had a thick band of thunderstorms wrapping into the southern quadrant from the southeast.

On March 9 at 10 a.m. EST (1500 UTC) the Joint Typhoon Warning Center or JTWC noted that Haleh’s maximum sustained winds dropped to near 40 knots (46 mph/74 kph). It was centered near 32.9 degrees south latitude and 65.5 degrees east longitude. That’s 852 nautical miles south-southeast of Port Louis, Mauritius. Haleh was moving north-northwest and is forecast to turn to the north-northeast.

JTWC has forecast Haleh to weaken below the threshold of a tropical cyclone on March 9.

Is it ever too late for adults to benefit from physical activity?

Behold the Bili-ruler: A novel, low-cost device for screening neonatal…