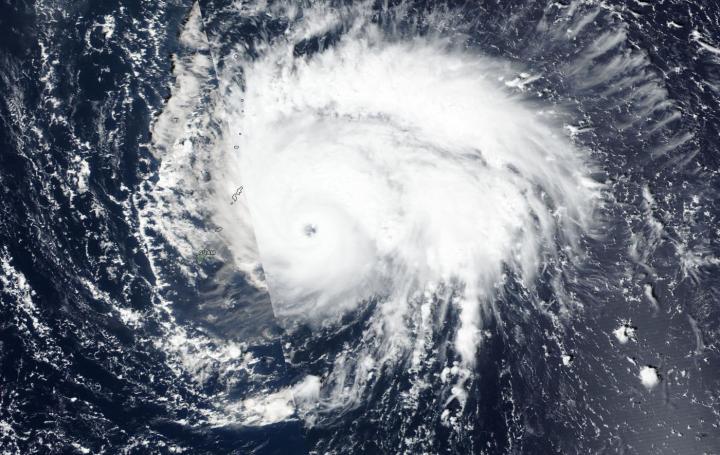 Typhoon Bualoi rapidly intensified over 24 hours and quickly developed an eye and powerful thunderstorms.
On Oct. 21, the eye of Typhoon Bualoi was just over 50 miles from the island of Saipan when NASA-NOAA’s Suomi NPP satellite passed overhead. Saipan is the largest island of the Northern Mariana Islands. The Marianas are a commonwealth of the United States in the western Pacific Ocean.

Satellite imagery helps forecasters understand if a storm is organizing or weakening. The shape of a tropical cyclone provides forecasters with an idea of its organization and strength, and NASA-NOAA’s Suomi NPP satellite provided a visible image of the storm to forecasters.

Bualoi formed on Oct. 19 as Tropical Depression 22W and strengthened into a tropical storm later that day. It became a typhoon on Oct. 20.

On Monday, October 21, 2019, the National Weather Service in Tiyan, Guam noted that a Typhoon Warning remains in effect for Tinian and Saipan. Damaging winds of 39 mph or more are expected through this morning. A Tropical Storm Watch remains in effect for the islands of Agrihan, Pagan and Alamagan in the Northern Mariana Islands. Damaging winds of 39 mph or higher are possible today.

Status of Typhoon Bualoi on Oct. 21

At 11 a.m. EDT (1 a.m. CHST, local time/1500 UTC), Typhoon Bualoi was centered near latitude 15.8 degrees north  and longitude 146.4 degrees east. That puts the eye about 65 miles northeast of Saipan, 75 miles northeast of Tinian, 130 miles south-southeast of Alamagan, and about 195 miles northeast of Guam.  Maximum sustained winds have increased to 120 mph. Bualoi is forecast to intensify through Wednesday.

Bualoi is moving northwest at 12 mph. It is expected to maintain this general course and speed over the next 24 hours.

Protein in blood protects against neuronal damage after brain hemorrhage

How long does a whale feed? New data gives insight into blue and fin whale…