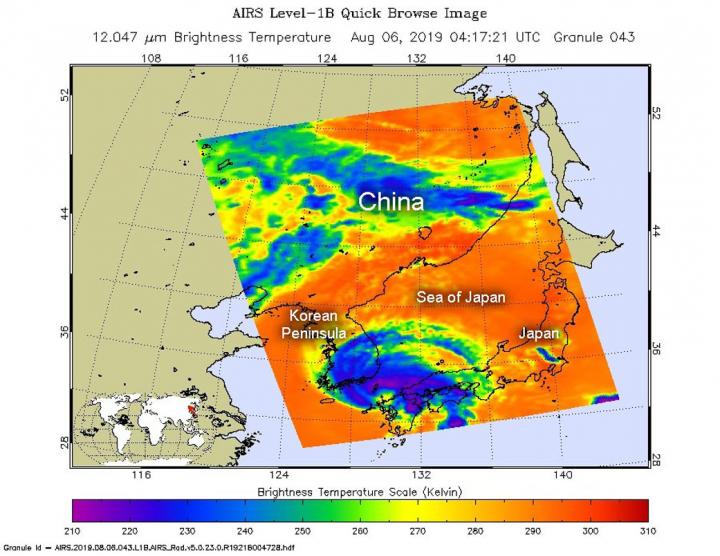 NASA’s Aqua satellite passed over the Korea Strait and found the center of Tropical Storm Francisco in the middle of it. The AIRS instrument aboard took the temperature of its cloud tops to estimate storm strength and found strong storms over two countries.

The Korea Strait is a located between South Korea and Japan. It connects the East China Sea, the Yellow Sea and the Sea of Japan in the northwest Pacific Ocean..

NASA’s Aqua satellite passed over Francisco on Aug. 6, at 1217 a.m. EDT (0417 UTC). The Atmospheric Infrared Sounder or AIRS instrument aboard NASA’s Aqua satellite analyzed Francisco in infrared light and found cloud top temperatures of strongest thunderstorms as cold as or colder than minus 63 degrees Fahrenheit (minus 53 degrees Celsius) were wrapping around the low-level center from west to north to east. Cloud top temperatures that cold indicate strong storms that have the capability to create heavy rain. Those strong storms were affecting southern South Korea and southern Japan. The southern side of the storm appeared to have few storms.

At 11 a.m. EDT (1500 UTC), the center of Tropical Storm Francisco was located near latitude 36.2 degrees north and 129.4 degrees east longitude. Francisco’s center is about 33 nautical miles north-northeast of Busan, South Korea. It was moving to the northwest and had maximum sustained winds near 45 knots (52 mph/83 kph).

The Joint Typhoon Warning Center forecasts that Francisco will move north then turn northeast and curve east through the Sea of Japan and cross Hokkiado, the northernmost islands of Japan on Aug. 8.