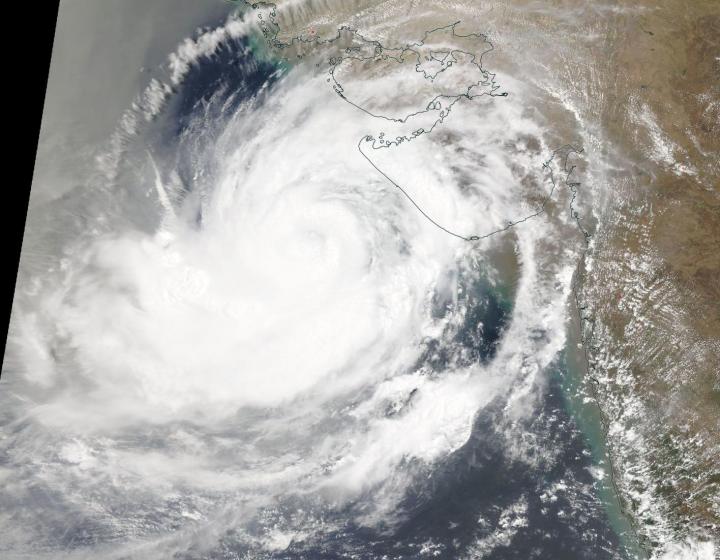 JTWC forecasters noted that there are several things happening with the storm that is affecting the strength and shape of it. Dry air continues to feed into the storm, which prevents the development of thunderstorms (that make up the tropical cyclone). However, that is offset by low vertical wind shear (outside winds blowing at different speeds at different levels of the atmosphere that if strong enough, can blow a storm apart). Vayu is also moving through very warm waters, as warm as 30 to 31 degrees Celsius (86 to 87.8 degrees Fahrenheit) that is keeping the storm together. Tropical cyclones require sea surface temperatures of at least 80 degrees Fahrenheit (26.6 degrees Celsius) to maintain them. Warmer sea surface temperatures help keep storms together or give them fuel to strengthen further.

At 5 a.m. EDT (0900 UTC), the Joint Typhoon Warning Center or JTWC reported that Tropical Cyclone Vayu was located near 20.8 degrees north latitude and 68/0 east longitude. That is 248 nautical miles south-southeast of Karachi, Pakistan. Vayu has turned to the west-southwest. Maximum sustained winds had dropped to 85 knots (98 mph/157 kph) and the storm is forecast to continue weakening.

The JTWC has forecast Vayu to curve back to the northeast and make landfall in four days along the northwestern India/Pakistan border on June 17.

How was Medicaid expansion associated with rates of child maltreatment?