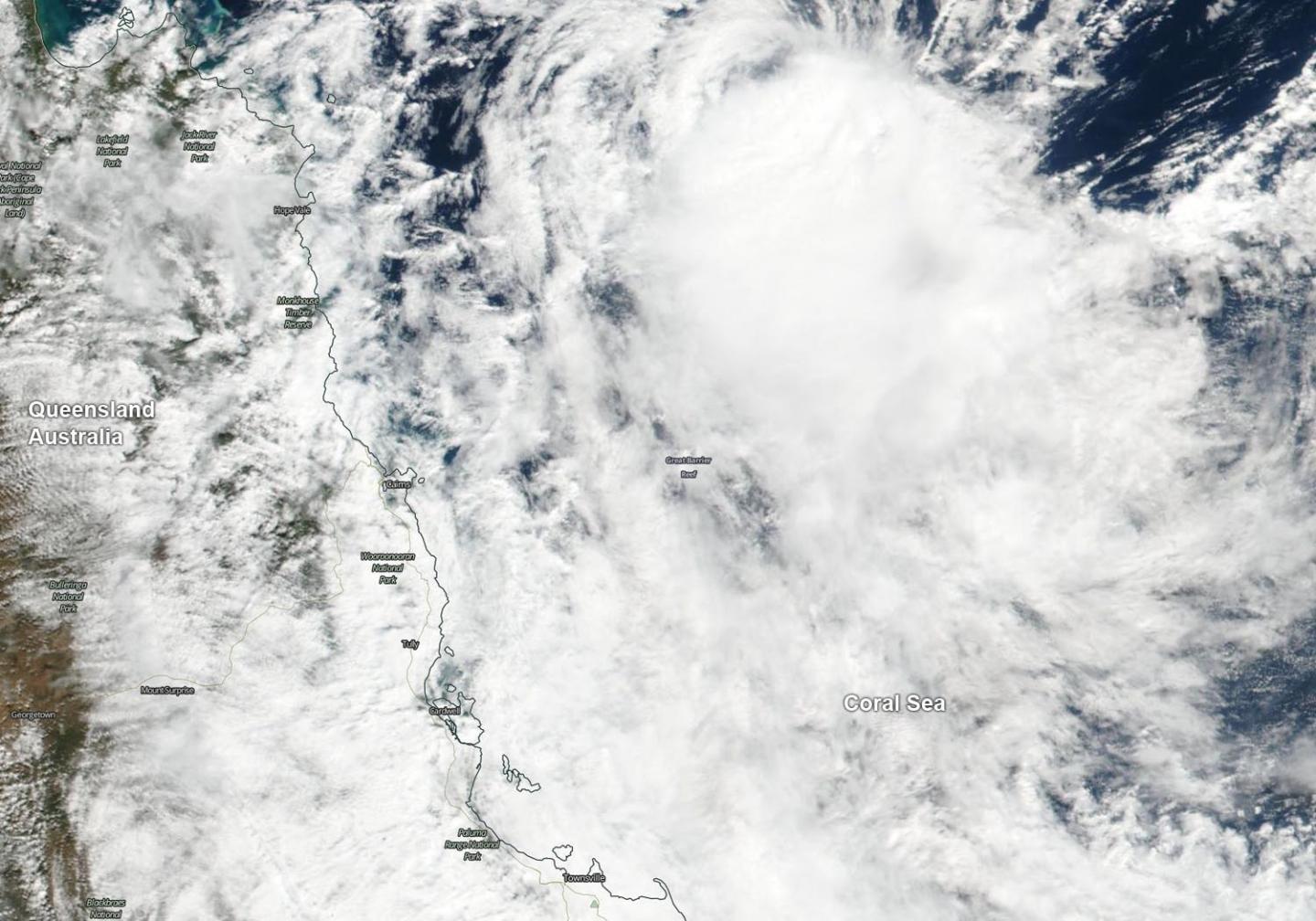 Australia’s world-famous Great Barrier Reef is located in the Coral Sea, east of Queensland and on May 14, Tropical Cyclone Ann was moving over it. From their orbit in space, NASA’s Terra and Aqua satellites passed over the Southern Pacific Ocean obtained visible and infrared imagery of the storm as it moved toward the Queensland coast.

The Great Barrier Reef is the world’s largest coral reef system. The Reef is made up of more than 2,900 individual reefs and 900 islands that cover more than stretching for over 1,429 miles (2,300 kilometers).

An infrared look at the tropical storm obtained by NASA’s Aqua satellite revealed where the strongest storms were located within Tropical Cyclone Ann on May 13 at 0341 UTC (May 12 at 11:41 p.m. EDT). The Atmospheric Infrared Sounder or AIRS instrument aboard NASA’s Aqua satellite analyzed cloud top temperatures and found cloud top temperatures of strongest thunderstorms as cold as or colder than minus 63 degrees Fahrenheit (minus 53 degrees Celsius) circling the center and in a large band of thunderstorms north of the center. Cloud top temperatures that cold indicate strong storms that have the capability to create heavy rain.

On May 14, NASA’s Terra satellite provided a visible image of the storm to forecasters. The Moderate Resolution Imaging Spectroradiometer or MODIS instrument aboard Terra captured the storm as it was moving over the Great Barrier Reef in the Coral Sea. Multispectral satellite imagery at the time showed that an exposed, well-defined low-level circulation center with a small area of convection flaring 50 nautical miles to the south.

Ann is weakening because it has run into increased vertical wind shear, that is, winds blowing at different directions at different levels of the atmosphere tearing at the storm’s structure. There is also dry air moving into Tropical Cyclone Ann at low and mid-levels of the atmosphere, preventing the development of thunderstorms that fuel the storm.

The Australian Bureau of Meteorology or ABM noted “Ex-tropical cyclone Ann expected to bring damaging winds and heavy rainfall to parts of northeast Queensland” and issued a Severe Weather Warning for damaging winds and heavy rainfall. The warning is for residents in parts of Peninsula, North Tropical Coast and Tablelands and Herbert and Lower Burdekin Forecast Districts.

Local impacts include strong winds and heavy rainfall. ABM cited “damaging winds, with peak gusts of around 90 kph (56 mph) may develop during Wednesday morning between about Lockhart River and Cooktown, including Lizard Island. The winds should gradually ease during Wednesday afternoon as the low moves across Cape York Peninsula.

ABM Warnings are also available through TV and Radio broadcasts, the Bureau’s website at http://www.bom.gov.au.

On May 14 at 5 a.m. EDT (0900 UTC), the center of Tropical Cyclone Ann was located near latitude 14.3 degrees south and longitude 146.9 degrees east. That is about 178 nautical miles northeast of Cairns Australia. Ann was moving to the west and had maximum sustained winds near 35 knots (40 mph / 65 kph).

The Joint Typhoon Warning Center expects Ann to make landfall within 24 hours to the north of Cape Melville National Park and Mungkan Kandju National Park, and dissipate less than a day later.

Relay station in the brain controls our movements

Progress against child mortality lags in many Indian states