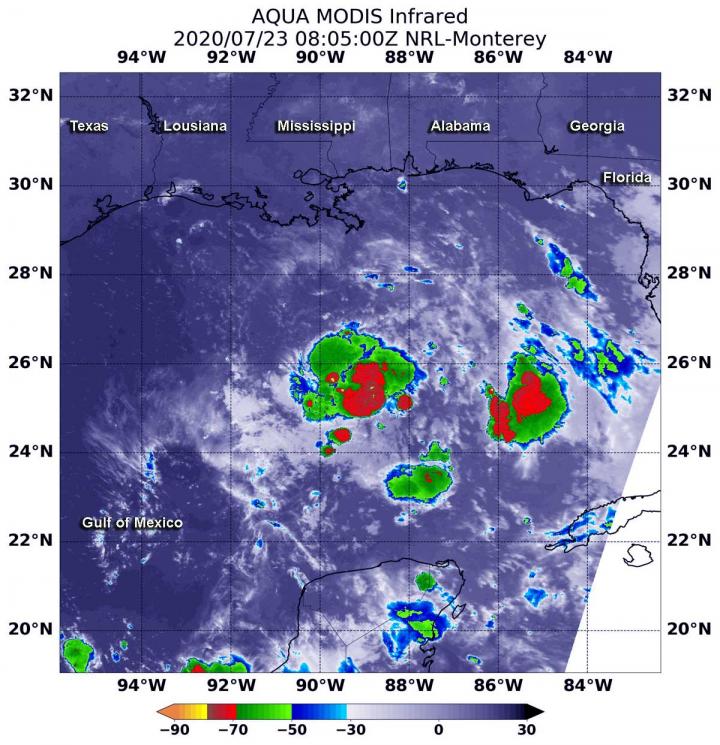 Aqua found the most powerful thunderstorms around the center of circulation and areas east of the center, where temperatures were as cold as or colder than minus 70 degrees Fahrenheit (minus 56.6 Celsius). Cloud top temperatures that cold indicate strong storms with the potential to generate heavy rainfall.

At that time, the center of Tropical Depression 8 was located by an Air Force Reserve Hurricane Hunter aircraft near latitude 26.0 degrees north and longitude 90.3 degrees west. That is about 415 miles (665 km) east-southeast of Port O’Connor, Texas. In 15 hours, the storm had moved 115 miles closer to Port O’Connor.

The depression is moving toward the west-northwest near 7 mph (11 kph), and a west-northwestward to westward motion is expected during the next couple of days. Maximum sustained winds are near 35 mph (55 kph) with higher gusts. The latest minimum central pressure reported by the Hurricane Hunter Aircraft is 1008 millibars.

Satellite data at 2 p.m. EDT revealed Tropical Depression 8 is getting better organized, with a better-defined center located near the northeastern end of a broadly curved convective band.

Slow strengthening is expected, and the depression could become a tropical storm during the next 12 to 24 hours. On the forecast track, the center of the depression is expected to move across the northwestern Gulf of Mexico today and Friday and make landfall along the Texas coast on Saturday.

Tropical cyclones/hurricanes are the most powerful weather events on Earth. NASA’s expertise in space and scientific exploration contributes to essential services provided to the American people by other federal agencies, such as hurricane weather forecasting.