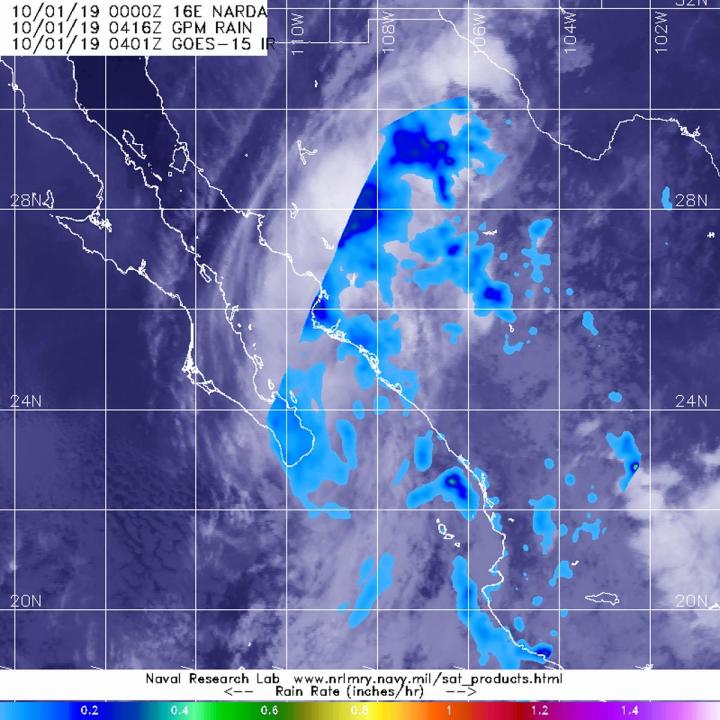 The remnant low pressure area that was formerly known as tropical cyclone Narda is still generating rainfall as it moves toward the southwestern U.S. The Global Precipitation Measurement mission or GPM satellite provided a look at the rainfall occurring on the eastern side of the system.

The GPM’s core satellite passed over the eastern side of Narda’s remnants on Oct. 1 at 12:16 a.m. EDT (0416 UTC). GPM found scattered light rain from the remnant clouds falling at around 0.2 inches (5 millimeters) per hour. Forecasters at NOAA’s National Hurricane Center or NHC incorporated that rainfall data into their forecast.

NHC said, “Narda is expected to produce additional rainfall of up to 2 inches across portions of Chihuahua and Sonora. Moisture from Narda will spread northeastward across portions of the U.S. Southern Plains for the next couple of days, enhancing rainfall and the threat of flash flooding in those areas.”

On Oct. 1 at 11 a.m. EDT (1500 UTC), the remnants of Narda were located near latitude 27.3 degrees north and longitude 110.3 degrees west. Maximum sustained winds have decreased to near 30 mph (45 kph) and are weakening. The estimated minimum central pressure is 1005 millibars.

GPM is a joint mission between NASA and the Japan Aerospace Exploration Agency, JAXA.

Water was a winner in capturing CO2

How we learn is a quantum-like manner!