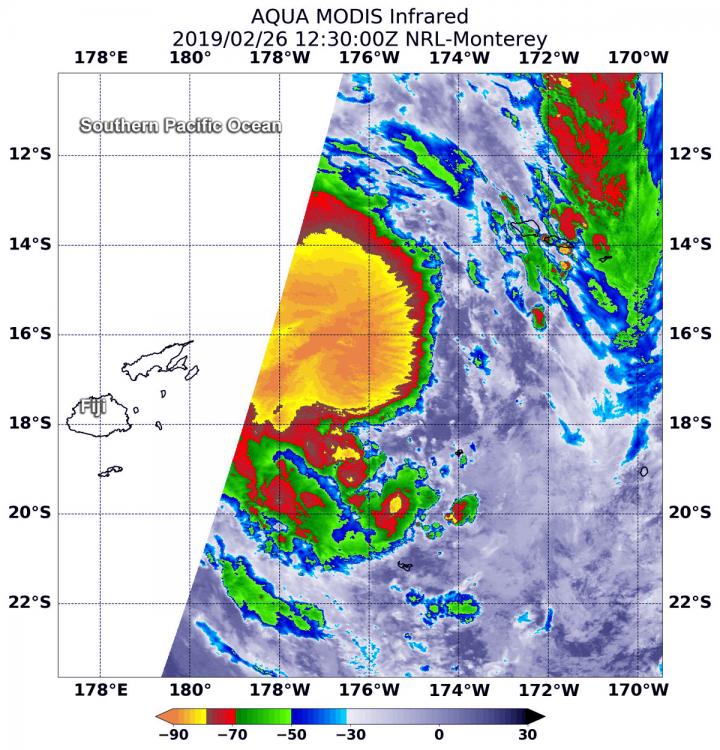 At 7:30 a.m. EDT (1230 UTC) on Feb. 26, the MODIS or Moderate Resolution Imaging Spectroradiometer instrument aboard NASA’s Aqua satellite looked at Tropical Cyclone Pola, also known as Tropical Cyclone 16P, in infrared light. MODIS found coldest cloud tops had temperatures near minus 80 degrees Fahrenheit (minus 62.2 degrees Celsius) around the center of the tropical storm. Storms with temperatures that cold are indicative of strong storms and have been shown to have the capability to generate heavy rainfall.

The Fiji Meteorological Services posted a heavy rain alert for the Lomaiviti group, eastern and interior parts of Viti Levu, Kadavu and nearby smaller islands.

The Joint Typhoon Warning Center or JTWC posted at 10 a.m. EDT (1500 UTC) on Feb. 26 that Pola was located at 17.4 degrees south latitude and 176.4 degrees west longitude. That’s approximately 283 nautical miles southwest of Avata Samoa. Pola was moving southward and is expected to continue in that general direction over the next several days. Maximum sustained winds were near 40 mph (46 mph/74 kph) and the storm is expected to strengthen to 55 knots (63 mph/102 kph).

JTWC expects that Pola will reach peak strength as a tropical storm on Feb. 27 and then begin transitioning into an extra-tropical storm as it moves away from Fiji.

Dramatic change in ancient nomad diets coincides with expansion of…