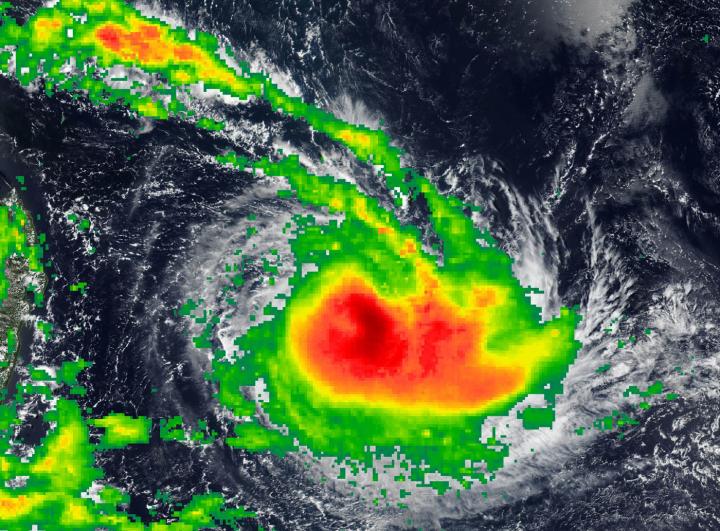 NASA calculated the rainfall rates occurring in Tropical Cyclone Joaninha as it moved through the open waters of the Southern Indian Ocean.

Data from the Global Precipitation Measurement mission (GPM) is used to develop rainfall total estimations and provided a look at rain Joaninha was generating.

GPM is a joint mission between NASA and the Japan Aerospace Exploration Agency, JAXA. GPM also utilizes a constellation of other satellites to provide a global analysis of precipitation that are used in the IMERG calculation. NASA’s Integrated Multi-satellitE Retrievals for GPM (IMERG) data were used to estimate the rate in which rain was falling in Joaninha on March 24. Rainfall rates were often greater than 0.75 inches (19 mm) per hour around the center.

At NASA’s Goddard Space Flight Center in Greenbelt, Maryland, those data are incorporated into NASA’s IMERG or Integrated Multi-satellitE Retrievals for GPM. IMERG is used to estimate precipitation from a combination of passive microwave sensors, including the Global Precipitation Measurement (GPM) mission’s core satellite’s GMI microwave sensor and geostationary IR (infrared) data. IMERG real-time data are generated by NASA’s Precipitation Processing System every half hour and are normally available within six hours.

IMERG creates a merged precipitation product from the GPM constellation of satellites. These satellites include DMSPs from the U.S. Department of Defense, GCOM-W from the Japan Aerospace Exploration Agency (JAXA), Megha-Tropiques from the Centre National D’etudies Spatiales (CNES) and Indian Space Research Organization (ISRO), NOAA series from the National Oceanic and Atmospheric Administration (NOAA), Suomi-NPP from NOAA-NASA, and MetOps from the European Organisation for the Exploitation of Meteorological Satellites (EUMETSAT). All of the instruments (radiometers) onboard the constellation partners are inter-calibrated with information from the GPM Core Observatory’s GPM Microwave Imager (GMI) and Dual-frequency Precipitation Radar (DPR).

On March 25 at 11 a.m. EDT (1500 UTC), Joaninha had maximum sustained winds near 105 knots (121 mph/195 kph). It was centered near 18.3 degrees south latitude and 62.9 degrees east longitude, about 335 miles east-northeast of Port Louis, Mauritius. Joaninha was moving to the southeast and is expected to continue in that general direction.

The Joint Typhoon Warning Center forecast expects Joaninha to continue to move southeast, while intensifying to 110 knots (126 mph/204 kph) by March 26, as it passes close to Rodrigues Island. After 3 days, the cyclone will start to weaken as conditions deteriorate.

New web-based tool accelerates research on conditions such as…