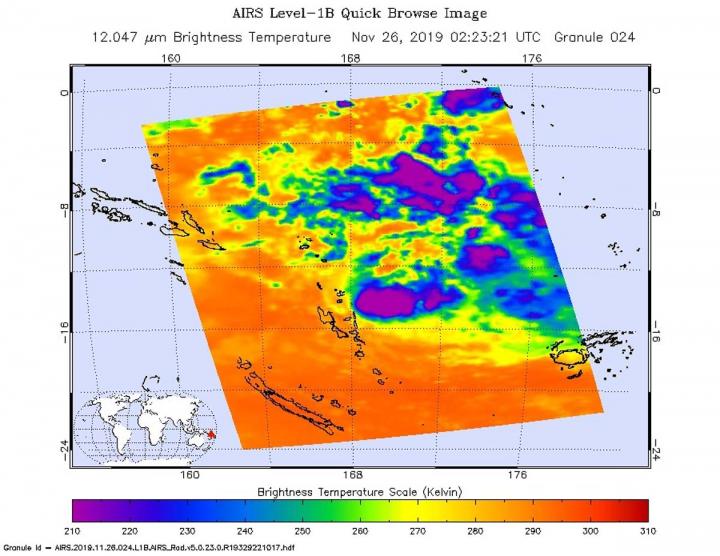 NASA analyzed the cloud top temperatures in Tropical Storm Rita using infrared light to determine the strength of the storm. Rita has triggered warnings in the island nation of Vanuatu.

On Nov. 26 at 0224 UTC (Nov. 25 at 9:24 p.m. EST) NASA’s Aqua satellite analyzed the storm using the Atmospheric Infrared Sounder or AIRS instrument. The AIRS imagery showed the strongest storms were southeast of the center. In those areas, AIRS found coldest cloud top temperatures as cold as or colder 210 Kelvin minus 81 degrees Fahrenheit (minus 63.1 degrees Celsius). NASA research has shown that cloud top temperatures that cold indicate strong storms that have the capability to create heavy rain.

Animated enhanced infrared satellite imagery shows that convection (rising air that forms the thunderstorms that make up a tropical cyclone) is rapidly decaying. That means that thunderstorms cannot form easily. The bulk of the clouds and showers are being pushed to the southeast of the low-level center of circulation by northwesterly winds.

Tropical cyclones do not always have uniform strength, and some sides have stronger sides than others, so knowing where the strongest sides of the storms are located helps forecasters. NASA then provides data to tropical cyclone meteorologists so they can incorporate it in their forecasts.

The National Disaster Management Office (NDMO) advises that a Yellow Alert is in effect for people in Penama and Malampa provinces.  Strong to gale force winds may be expected to the east of Penama, Malampa and Shefa Provinces.

On Wednesday, Nov. 27, 2019, the Vanuatu Meteorology and Geo-Hazards Department (VMGD), Port Vila, Vanuatu, said, “Heavy rainfalls are expected over the eastern parts of Penama, Malampa and Shefa province tonight and continuing tomorrow. A Marine strong wind warning for all coastal waters is current. High Seas warning is also current for open waters of Vanuatu close to the system.”

The JTWC expects Rita will dissipate over the next day.

Typhoons and hurricanes are the most powerful weather event on Earth. NASA’s expertise in space and scientific exploration contributes to essential services provided to the American people by other federal agencies, such as hurricane weather forecasting.

The AIRS instrument is one of six instruments flying on board NASA’s Aqua satellite, launched on May 4, 2002.

Graphene, quantum and the brain: Put them together and what do you get? Deep Tech…