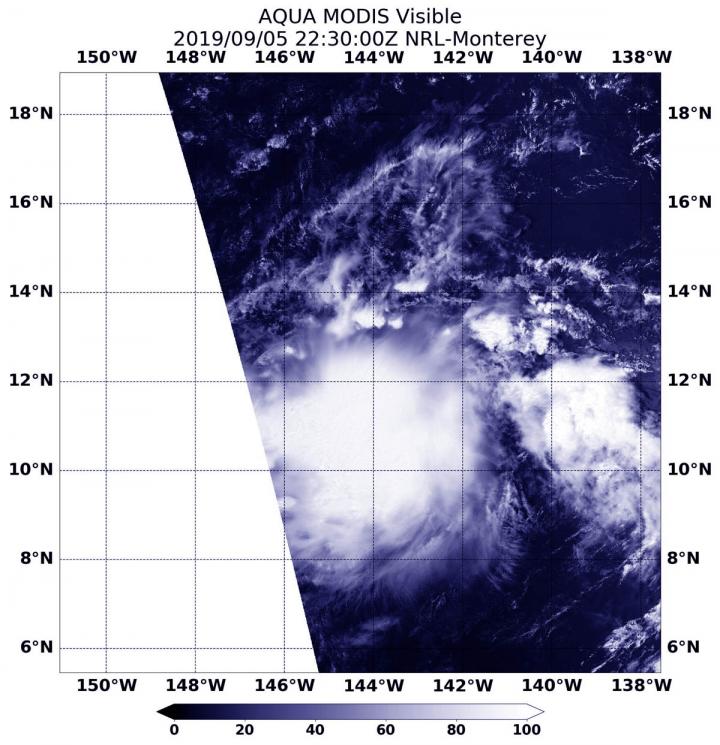 Akoni developed as Tropical Depression 12E on Sept. 4 in the far eastern Pacific Ocean. On Sept. 5 it strengthened into a tropical storm at 7 p.m. EDT. That’s when it became Akoni. By 5 a.m. EDT on Sept. 6, Akoni had transitioned into a post-tropical storm.

The Moderate Resolution Imaging Spectroradiometer or MODIS instrument aboard NASA’s Aqua satellite provided a visible image of Akoni as it was strengthening into a tropical storm. The image was taken at 4:30 p.m. EDT (2230 UTC) on Sept. 5, 2019 and it revealed a rounded storm.

An infrared image from MODIS was taken later on Sept. 6 at 6:45 a.m. EDT (1045 UTC) once Akoni had become Post-Tropical. That infrared MODIS image showed just a small area of strong storms located just southeast of center where cloud top temperatures were near minus 70 degrees Fahrenheit ( minus 56.6 degrees Celsius).

NOAA’s National Hurricane Center (NHC) said, “Although showers and thunderstorms continue to pulse near Akoni’s elongated low-level circulation center (LLCC), they have not been sufficiently persistent or organized to continue to classify the system as a tropical cyclone, and Akoni is being downgraded to a post-tropical remnant low.”

At 5 a.m. EDT (0900 UTC), NHC reported in their final advisory on the system that “the center of Post-Tropical Cyclone Akoni was located near latitude 11.2 degrees north and longitude 149.7 degrees west. That’s about 690 miles (1,105 km) south-southeast of Hilo, Hawaii. Maximum sustained winds are near 35 mph (55 kph) with higher gusts. Little change in strength is forecast during the next couple of days. The estimated minimum central pressure is 1007 millibars.”

The post-tropical cyclone is moving toward the west near 16 mph (26 kph), and this motion is expected to continue the next couple of days, with some increase in forward speed over the weekend.

Scienmag Apr 29, 2019
International collaboration demonstrates the possibility of tuning the color of a GaN LED by changing the time…