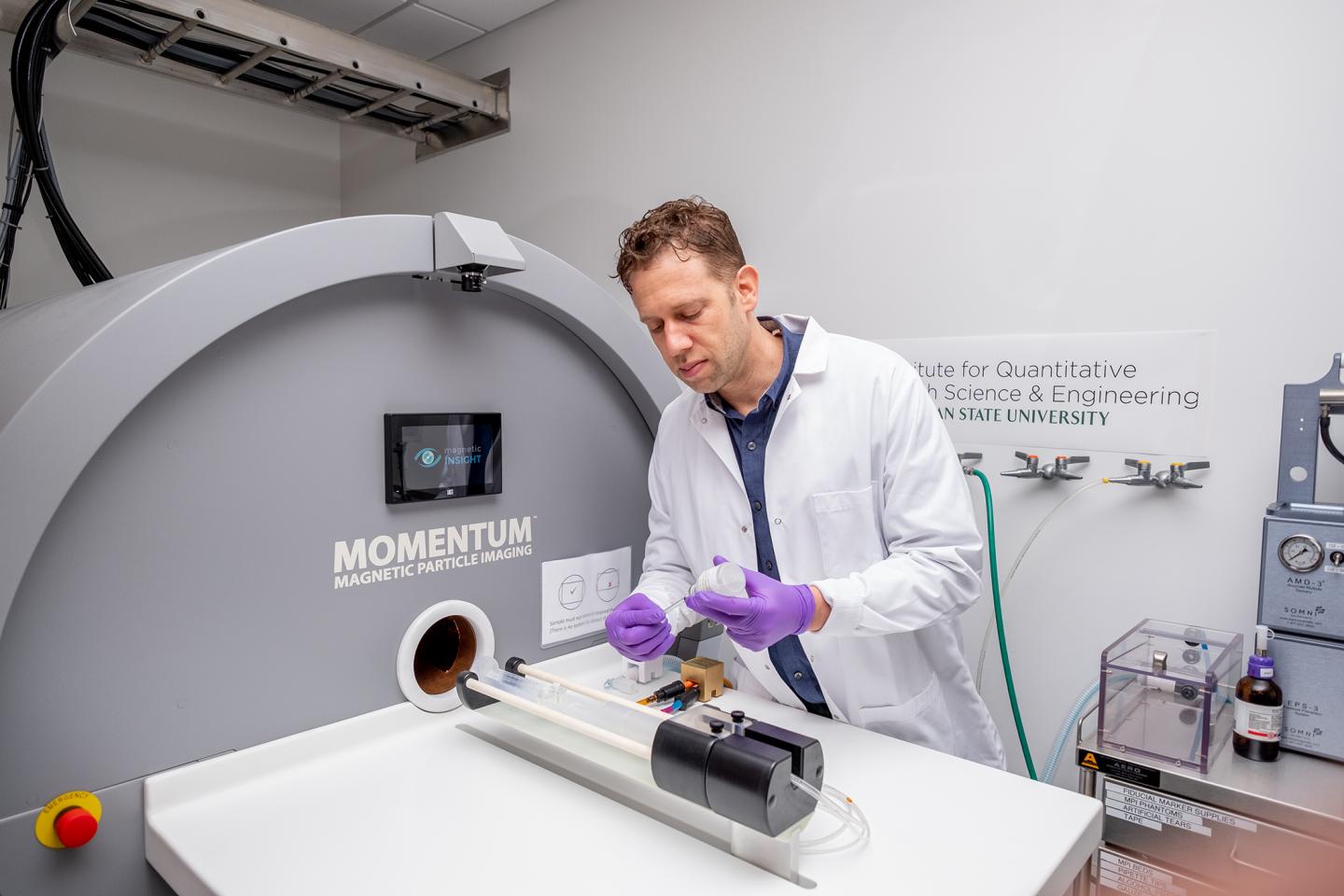 With new advances in medicine happening daily, there’s still plenty of guesswork when it comes to administering chemotherapy to cancer patients. Too high a dose can result in killing healthy tissue and cells, triggering more side effects or even death; too low a dose may stun, rather than kill, cancer cells, allowing them to come back, in many cases, much stronger and deadlier.

Bryan Smith, associate professor of biomedical engineering, created a process based around magnetic particle imaging (MPI) that employs superparamagnetic nanoparticles as the contrast agent and the sole signal source to monitor drug release in the body – at the site of the tumor.

“It’s noninvasive and could give doctors an immediate quantitative visualization of how the drug is being distributed anywhere in the body,” Smith said. “With MPI, doctors in the future could see how much drug is going directly to the tumor and then adjust amounts given on the fly; conversely, if toxicity is a concern, it can provide a view of the liver, spleen or kidneys as well to minimize side effects. That way, they could precisely ensure each patient remains within the therapeutic window.”

Smith’s team, which included scientists from Stanford University, used mice models to pair its superparamagnetic nanoparticle system with Doxorubicin, a commonly used chemotherapy drug. The results, published in the current issue of the journal Nano Letters, show that the nanocomposite combination serves as a drug delivery system as well as an MPI tracer.

MPI is a new imaging technology that is faster than traditional magnetic resonance imaging (MRI) and has near-infinite contrast. When combined with the nanocomposite, it can illuminate drug delivery rates within tumors hidden deep within the body.

As the nanocomposite degrades, it begins to release Doxorubicin in the tumor. Simultaneously, the iron oxide nanocluster begins to disassemble, which triggers the MPI signal changes. It will allow doctors to see more precisely how much medicine is reaching the tumor at any depth, Smith said.

“We showed that the MPI signal changes are linearly correlated with the release of Doxorubicin with near 100-percent accuracy,” he said. “This key concept enabled our MPI innovation to monitor drug release. Our translational strategy of using a biocompatible polymer-coated iron oxide nanocomposite will be promising in future clinical use.”

Smith has filed a provisional patent for his innovative process. In addition, the individual components of the nanocomposite Smith’s team created have already earned FDA approval for use in human medicine. This should help speed FDA approval for the new monitoring method.

As the process moves toward clinical trials, which could potentially begin within seven years, Smith’s team will begin testing multicolor MPI to further enhance the process’s quantitative capabilities, as well as drugs other than Doxorubicin, he said.