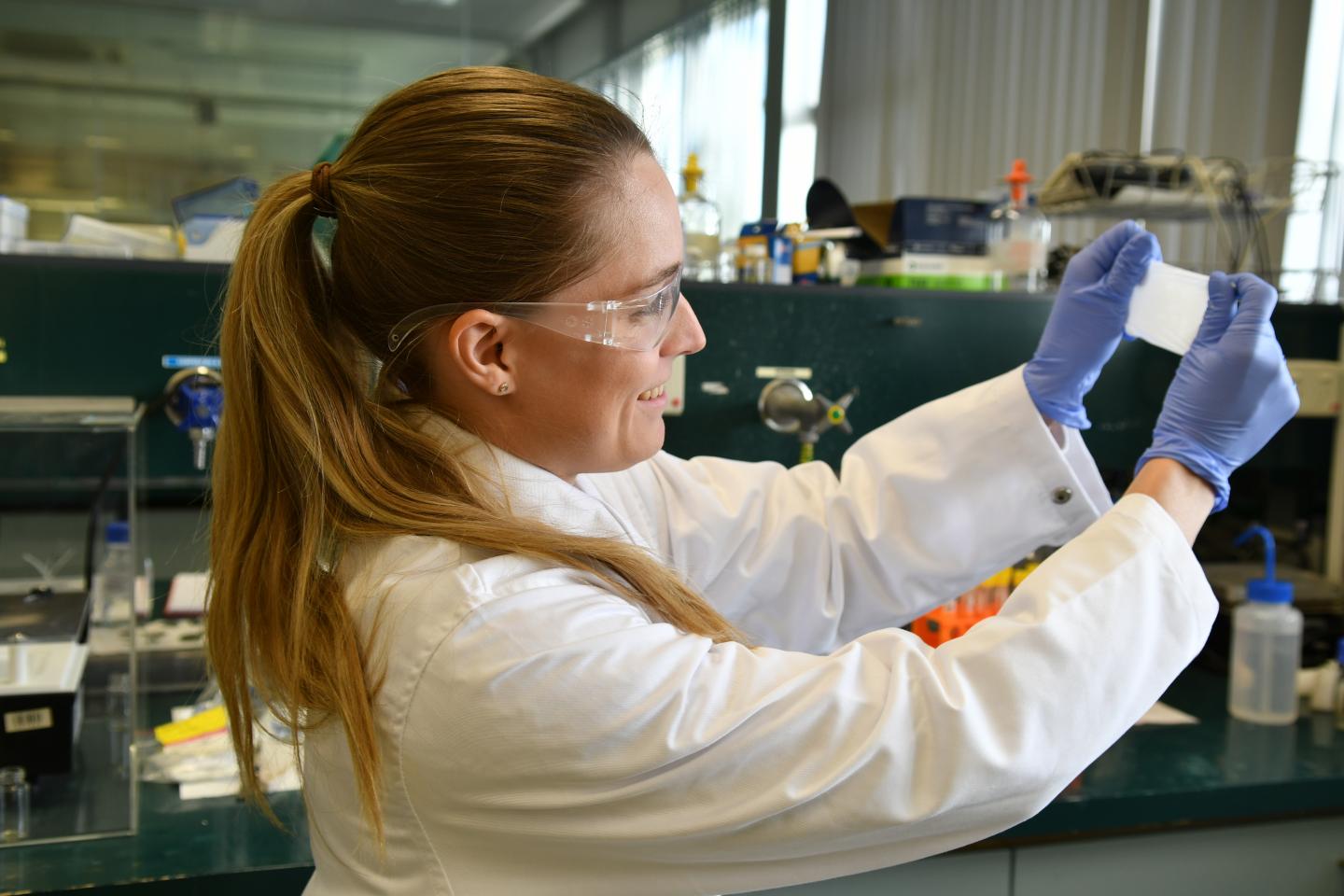 The fight against global antibiotic resistance has taken a major step forward with scientists discovering a concept for fabricating nanomeshes as an effective drug delivery system for antibiotics.

Health experts are increasingly concerned about the rise in medication resistant bacteria.

Flinders University researchers and collaborators in Japan have produced a nanomesh that is capable of delivering drug treatments.

In studying the effectiveness of the nanomesh, two antibiotics, Colistin and Vancomycin, were added together with gold nanoparticles to the mesh, before they were tested over a 14 day period by PHD student Melanie Fuller.

Flinders Institute for Nanoscience and Technology Associate Professor Ingo Koeper says 20cm by 15cm pieces of mesh were produced which contain fibres 200 nm in diameter. These meshes are produced using a process called electrospinning with parameters being optimised to ensure the mesh material was consistent.

“In order to deliver the antibiotics to a specific area, the antibiotics were embedded into the mesh produced using a technique called electrospinning, which has gained considerable interest in the biomedical community as it offers promise in many applications including wound management, drug delivery and antibiotic coatings,” says Assoc Prof. Koeper

“A high voltage is then applied between the needle connected to the syringe, and the collector plate which causes the polymer solution to form a cone as it leaves the syringe, at which point the electrostatic forces release a jet of liquid.”

The results also suggest dosages could be reduced when compared to traditional drugs which can also diminish potential side effects and complications.

“Although the dosage is reduced compared to an oral dosage, the concentration of antibiotics delivered to the infection site can still be higher, ensuring the bacteria cannot survive which will reduce instances of resistance.”

“This research, as a proof of concept, suggests an opportunity for fabricating nanomeshes which contain gold nanoparticles as a drug treatment for antibiotics.”

Working with Dr. Harriet Whiley, a Flinders environmental health scientists, the researchers studied how the release of the drugs affected the growth of E. Coli. The in vitro study confirmed Colistin with negatively charged gold nanoparticles produced the most efficient nanomesh, significantly affecting bacterial growth.

“Further investigation is needed to determine if other small charged particles affect the release of drugs and how it affects the release over time. As it is a pharmaceutical application, the stability of the mesh under different storage conditions as well as the toxicological properties also need to be evaluated.”

Dialing up the heat on nanoparticles

Scienmag Nov 17, 2019
Credit: Intermountain Healthcare While Intermittent fasting may sound like another dieting craze, the…

Stardust in the Antarctic snow