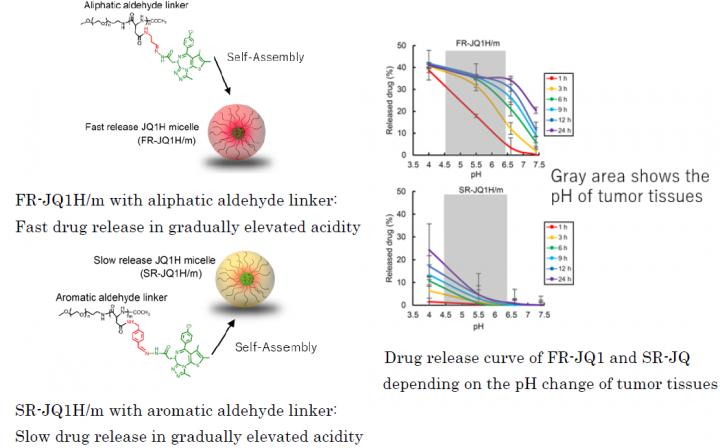 February 26, 2021 – Kawasaki, Japan: The Innovation Center of NanoMedicine (Director General: Prof. Kazunori Kataoka, Location: Kawasaki in Japan, Abbreviation: iCONM) reported in ACS Nano (Impact Factor: 14.588 in 2019) together with the group of Prof. Yu Matsumoto of Otorhinolaryngology and Head and Neck Surgery (Prof. Tatsuya Yamasoba) and the group of Prof. Horacio Cabral of the Department of Bioengineering (Prof. Ryo Miyake) in the University of Tokyo that the efficacy of polymeric nano-micelles with different drug activation profile depends on the expression level of c-Myc, one of the major proto-oncogene, has been developed. See: https://pubs.acs.org/doi/10.1021/acsnano.1c00364

It is known that c-Myc is involved in cancer cell proliferation and angiogenesis and changes the cell cycle, suppresses normal cell differentiation, and promotes cancer metastasis. It is a typical proto-oncogene that regulates many genes related to growth factors and is known to be involved in developing of many cancers, such as chromosomal translocation in Burkitt lymphoma. Therefore, drug discovery research is being conducted worldwide as an anticancer drug targeting this transcription factor that can directly attack cancer stem cells. However, since embryonic lethality occurs in c-Myc knockout mice, c-Myc is considered as an essential gene for living cells, and selective delivery to cancer tissues is an important key to developing its inhibitors. Besides, c-Myc is also known as a factor necessary for the initial induction of iPS cells. In the future this inhibition can be expected to be applied as a technology that can also be used to suppress iPS cell-derived carcinogenesis.

In this study, JQ1H, which is a structural analogue of JQ1H, a typical indirect c-Myc inhibitor, was encapsulated inside functional nano-micelles, and their efficacy was evaluated. JQ1 binds to a bromodomain protein called BRD4, which is involved in the activation of RNA polymerase II regulating the expression of c-Myc, to inhibit this stream strongly. As a result, the activity of RNA polymerase is weakened and c-Myc expression is down-regulated. Although JQ1 was expected as a promising epigenome drug due to its strong gene expression inhibition, it has an extremely short half-life in vivo due to its fast kidney excretion and rapid clearance after administration. Additionally, JQ1 is almost insoluble in water. These properties of JQ1 became big issues to develop it as an effective drug. The polymeric nano-micelles developed so far at the Innovation Center of NanoMedicine (iCONM), for anticancer therapy, demonstrated (1) stabilization of encapsulated drugs, (2) suppression of kidney excretion, (3) EPR (selective drug delivery to cancer tissues) mediated tumor accumulation, and (4) drug release based on tumor acidosis. This time, we confirmed good antitumor activity in mice transplanted with tongue cancer, melanoma and pancreatic cancer using JQ1-equipped nano-micelles.

Nano-micelles containing JQ1H leak into the tumor tissue from blood vessels after systemic administration due to the so-called EPR effect. Tumor tissues are rich in lactic acid due to its enhanced glycolysis and is more acidic than normal tissues. In this work, two types of nano-micelle were prepared; one in which hydrophobic JQ1H were linked to a amphiphilic block polymer composed of hydrophilic polyethylene glycol block and hydrophobic poly-amino acid block using 3-aminopropionaldehyde (aliphatic aldehyde) linker and the other micelle in which JQ1H was linked with polymer via p-aminomethylbenzaldehyde (aromatic aldehyde) linker. An amphiphilic block polymer was synthesized and used as a base material for nano-micelles (Fig. 1). When it was self-assembled in water to a micellar structure and administered to cancer-bearing mice, the antitumor activity shown in Fig. 2 was achieved. When the linker is an aliphatic aldehyde or when it is an aromatic aldehyde, the release pattern of the drug differs greatly depends on the acidity. The former releases the drug rapidly, and the latter releases the drug slowly. Therefore, the former nano-medicine was named FR-JQ1H/m and the latter was named SR-JQ1H/m. The antitumor activity of these nano-micelles differ greatly depending on the expression level of c-Myc. While, FR-JQ1H/m is more effective for tumors with high c-Myc expression, SR-JQ1H/m is more effective for tumors with low c-Myc expression.

In the future, we believe that the selection of nano-micelles according to the expression level of biomarkers will be an important step toward the realization of personalized medicine and in-body hospitals.

KAWASAKI INSTITUTE OF INDUSTRIAL PROMOTION was established in 1988 funded 100% from Kawasaki City for the purpose of coping with the hollowing out of industry and changes in the demand structure.

In order to realize a higher level of market development, transforming R&D type companies, training technological capabilities to support it, human resources development, understanding market needs, etc., by utilizing the functions of the Kawasaki, KAWASAKI INSTITUTE OF INDUSTRIAL PROMOTION has been contributing to revitalize the local economy by promoting exchanges of local industry information, advancing technology and corporate exchanges with establishment of a R&D institutions, developing creative human resources through workshops and promoting businesses such as expanding sales channels through exhibition business.

Innovation Center of NanoMedicine (iCONM) started its operation in April 2015 as a core research center in life science field at King SkyFront on the request of Kawasaki city that KAWASAKI INSTITUTE OF INDUSTRIAL PROMOTION utilized national policies as a business operator and proposer.

It is a unique research center that the world has ever seen which is designed for the purpose of promoting open innovation through industry-academia-government/medical-engineering collaboration, prepared with state-of-the-art facilities and experimental equipment, that enables comprehensive research and development from organic synthesis / microfabrication to preclinical testing.

The COI program is a research and development program under the Ministry of Education, Culture, Sports, Science and Technology and the Japan Science and Technology Agency. The program employs the backcasting approach and set interdisciplinary and collaborative R&D themes that should be challenged at the present from the issues that are underlying in the future society. Eighteen centers have been established nationwide to realize radical innovation through industry-academia collaboration which cannot be accomplished by industry and academia alone.
The Kawasaki center is the only COI center managed by local governments, not universities, and the research projects carried out there are called COINS (Center of Open Innovation Network for Smart Health).