Nanoenzymes designed with a unique combination of structure and functions 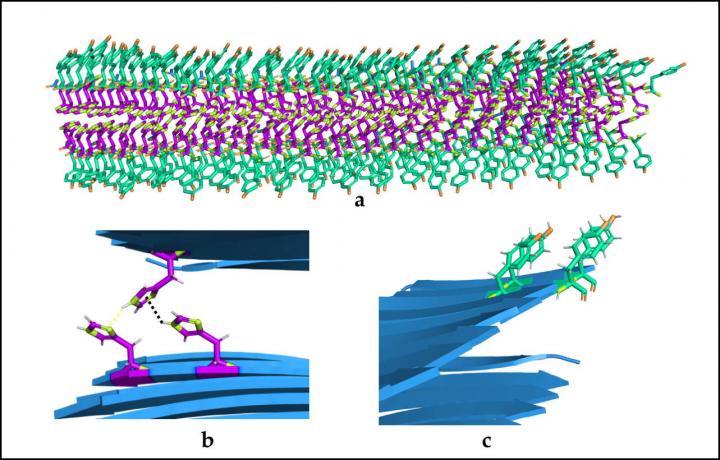 Researchers at the UAB have designed minimalist biostructures that imitate natural enzymes, capable of carrying out two differentiated and reversibly regulated activities thanks to a unique combination of structural and functional properties. The strategy used opens the door to the creation of “intelligent” nanomaterials with tailor-made combinations of catalytic functions.

There is an increasing interest in synthetic systems that can execute bioinspired chemical reactions without requiring the complex structures that characterise enzymes in their components. One of the most explored approaches is the self-assembly of peptides – molecules smaller than proteins – due to their biocompatibility and how their structural and functional properties can be controlled.

Researchers from the Institute of Biotechnology and Biomedicine at the Universitat Autònoma de Barcelona (IBB-UAB) recently designed one of the smallest mimetic enzyme structure ever. These peptides are made up of 7 to 9 amino acids which spontaneously self-assemble to form stable amyloid fibres and solid hydrogels, innocuous to cells.

Peptides are formed with only two types of water soluble amino acids (tyrosine and histidine), a binary code containing all the information needed to form nanostructures. In addition, they are reversible and can carry out two differentiated and unrelated catalytic activities.

Researchers managed to create a system that is simpler and can better control the enzymatic activity, and for the first time, a structure in which the very same amino acids providing catalytic activity also contribute to shaping the macromolecular architecture. In previous studies, these capacities were segregated in different regions of the molecule, which resulted in longer peptides and/or peptides with a single function.

“The quid of the question is that the catalytic activity of fibres and hydrogels can be achieved only when the peptides self-assemble”, explains Salvador Ventura, coordinator of the study. “The strategy we used sets down the bases for the creation of “intelligent” nanostructures materials, with tailor-made combinations of catalytic functions for a number of practical applications”.

Until now, the majority of minimalist peptides designed lacked one of the most important capacities of natural enzymes: the ability to reversibly regulate their activity. In this study, researchers managed to control the assembly capacity, and this allows alternating active and inactive forms with simple changes in pH.

In addition, the new peptides have properties that natural enzymes do not have, since these only conduct catalytic activities. Now, the peptides incorporate two different types of activities (hydrolitic and electrocatalytic) which can be conducted simultaneously or alternately. In any other case, this would require two structurally different artificial enzymes which would be hundreds of times larger and more expensive.

Another characteristic of these new artificial enzymes that researchers point out is the spontaneity of self-assembly, which implies that there is no need for additional chemical reagents or the application of heat, which could turn out to be toxic or have drastic effects on its structure.

Hydrogels and amyloid-like fibres allow generating solid and more efficient and economic microreactors, in which the final product of the reaction can be easily separated from the artificial enzyme.

“The macromolecular structures we have managed to create may have important applications in microfluidics, and also in drug delivery, since they can encapsulate the drug in its assembled state and free it in a specific manner, once the correct cell context is achieved, simply by disassembling”, Salvador Ventura highlights.

Salvador Ventura is head of the Protein Folding and Conformational Diseases group at the IBB. “We began the nanotechnological lines of research only three years ago, but our knowledge on the molecular mechanism of protein assembly into amyloid structures has helped us develop new functional, synthetic nanomaterials with properties that cannot be achieved with natural peptides or proteins”, he states.

The study, recently published in the journal ACS Catalysis, included the involvement of researchers from the IBB and from the UAB Departments of Chemistry and Biochemistry, and of Molecular Biology (Salvador Ventura, Marta Díaz-Caballero, Susanna Navarro, Mariona Sodupe and Luis Rodríguez-Santiago); from the Institute of Materials Science of Barcelona (ICMAB-CSIC) (Francesc Teixidor and Miquel Nuez-Martínez) and from the Centre for Cooperative Research in Biosciences (CIC bioGUNE) (Francesca Peccati).