Nano-scale discovery could help to cool down overheating in electronics

A team of physicists at CU Boulder has solved the mystery behind a perplexing phenomenon in the nano realm: why some ultra-small heat sources cool down faster if you pack them closer together. The findings, published today in the journal Proceedings of the National Academy of Sciences (PNAS), could one day help the tech industry design faster electronic devices that overheat less. 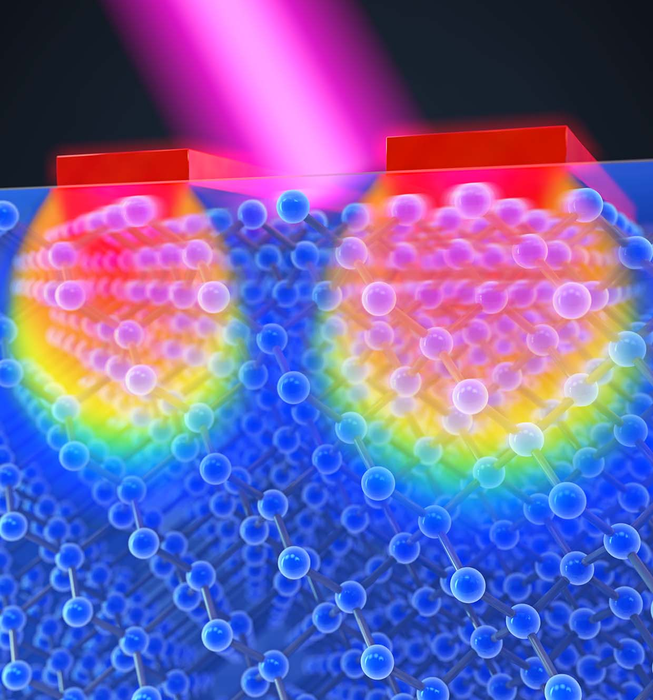 A team of physicists at CU Boulder has solved the mystery behind a perplexing phenomenon in the nano realm: why some ultra-small heat sources cool down faster if you pack them closer together. The findings, published today in the journal Proceedings of the National Academy of Sciences (PNAS), could one day help the tech industry design faster electronic devices that overheat less.

“Often, heat is a challenging consideration in designing electronics. You build a device then discover that it’s heating up faster than desired,” said study co-author Joshua Knobloch, postdoctoral research associate at JILA, a joint research institute between CU Boulder and the National Institute of Standards and Technology (NIST). “Our goal is to understand the fundamental physics involved so we can engineer future devices to efficiently manage the flow of heat.”

The research began with an unexplained observation: In 2015, researchers led by physicists Margaret Murnane and Henry Kapteyn at JILA were experimenting with bars of metal that were many times thinner than the width of a human hair on a silicon base. When they heated those bars up with a laser, something strange occurred.

“They behaved very counterintuitively,” Knobloch said. “These nano-scale heat sources do not usually dissipate heat efficiently. But if you pack them close together, they cool down much more quickly.”

Now, the researchers know why it happens.

In the new study, they used computer-based simulations to track the passage of heat from their nano-sized bars. They discovered that when they placed the heat sources close together, the vibrations of energy they produced began to bounce off each other, scattering heat away and cooling the bars down.

The group’s results highlight a major challenge in designing the next generation of tiny devices, such as microprocessors or quantum computer chips: When you shrink down to very small scales, heat does not always behave the way you think it should.

The transmission of heat in devices matters, the researchers added. Even minute defects in the design of electronics like computer chips can allow temperature to build up, adding wear and tear to a device. As tech companies strive to produce smaller and smaller electronics, they’ll need to pay more attention than ever before to phonons—vibrations of atoms that carry heat in solids.

“Heat flow involves very complex processes, making it hard to control,” Knobloch said. “But if we can understand how phonons behave on the small scale, then we can tailor their transport, allowing us to build more efficient devices.”

To do just that, Murnane and Kapteyn and their team of experimental physicists joined forces with a group of theorists led by Mahmoud Hussein, professor in the Ann and H.J. Smead Department of Aerospace Engineering Sciences. His group specializes in simulating, or modeling, the motion of phonons.

“At the atomic scale, the very nature of heat transfer emerges in a new light,” said Hussein who also has a courtesy appointment in the Department of Physics.

The researchers, essentially, recreated their experiment from several years before, but this time, entirely on a computer. They modeled a series of silicon bars, laid side by side like the slats in a train track and heated them up.

The simulations were so detailed, Knobloch said, that the team could follow the behavior of each and every atom in the model—millions of them in all—from start to finish.

“We were really pushing the limits of memory of the Summit Supercomputer at CU Boulder,” he said.

The technique paid off. The researchers found, for example, that when they spaced their silicon bars far enough apart, heat tended to escape away from those materials in a predictable way. The energy leaked from the bars and into the material below them, dissipating in every direction.

When the bars got closer together, however, something else happened. As the heat from those sources scattered, it effectively forced that energy to flow more intensely away from the sources—like a crowd of people in a stadium jostling against each other and eventually leaping out of the exit. The team denoted this phenomenon “directional thermal channeling.”

“This phenomenon increases the transport of heat down into the substrate and away from the heat sources,” Knobloch said.

The researchers suspect that engineers could one day tap into this unusual behavior to gain a better handle on how heat flows in small electronics—directing that energy along a desired path, instead of letting it run wild and free.

For now, the researchers see the latest study as what scientists from different disciplines can do when they work together.

This research was supported by the STROBE National Science Foundation Science and Technology Center on Real-Time Functional Imaging.

Other CU Boulder coauthors on the new research include Hossein Honarvar, a postdoctoral researcher in aerospace engineering sciences and JILA and Brendan McBennett, a graduate student at JILA. Former JILA researchers Travis Frazer, Begoña Abad and Jorge Hernandez-Charpak also contributed to the study.