ICFO researchers report on the discovery of a new type of optical singularity with the topology of a knot. 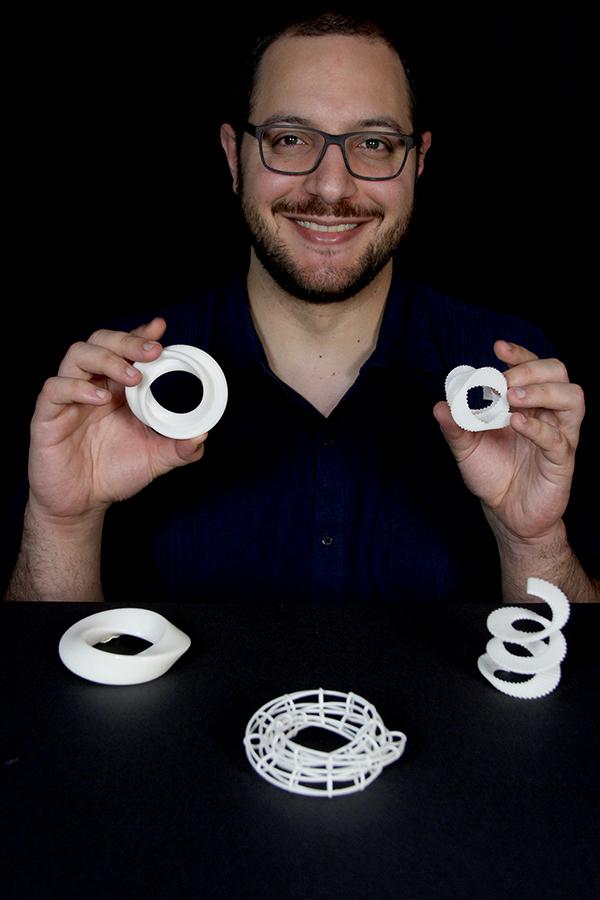 Around age six, we start learning how to tie our shoelaces, making knots that look like ribbons — or possibly more complex forms, if we are a little clumsy. We use knots every day, but the type of knots we generally use are associated with physical objects, things we can touch.

Although it can be hard to image, light can also be shaped in ways that form knotted configurations, whose shape depends on the orbital angular momentum of the light. This parameter is responsible for making the beam of light twist around its own axis, generating different knot shapes, and expanding to a new degree of freedom that can carry valuable information.

The behaviour of light also becomes richer when it passes from oscillating at one single frequency (monochromatic light) to vibrating at many different frequencies. This introduces a broad array of polarization states, each describing a shape that can be traced by the electric field of the light over time. Combining this wider space of possibilities with the spatial variations produced by the orbital angular momentum should produce even more room for interesting connections, but until now this has been an uncharted frontier: while there is a large body of research on structured light, it has been essentially focused on single-color fields.

In a recent study, published in two papers, joint collaborations by ICFO researchers have broken theoretical and experimental ground in this new field, uncovering new types of knots for twisted light and a new type of angular momentum.

In the first paper, published in Nature Photonics, ICFO researchers Emilio Pisanty, Gerard Jiménez Machado, Veronica Vicuña Hernández, Antonio Picón and Alessio Celi, led by ICREA Prof. at ICFO Maciej Lewenstein and UPC Prof. at ICFO Juan P. Torres, have designed a beam of light with a polarization state that forms three-lobed trefoils at each point, by combining light of different frequencies (w and 2w), and making the trefoils connect to each other in a way such that the light beam, as a whole, has the shape of a knot.

These beams also exhibit a new kind of angular momentum, associated with the unusual symmetry of the beams, which remain invariant under rotations — but only when the polarization is rotated by a specific fraction of the rotation of the spatial dependence. They named this new quantity the torus-knot angular momentum, because of the type of knot in the beams.

The researchers also implemented these beams experimentally, using nonlinear crystals to generate the beams, and they designed a nonlinear polarization tomography scheme to measure the trefoil shapes traced by the electric field. Their measurements show the presence of a new type of optical singularity which is topologically protected and robust against perturbations, caused by the different orientation of the polarization trefoils at different points around a circularly-polarized center.

In the second paper, published in Physical Review Letters, ICFO researchers Emilio Pisanty and Antonio Picón, led by ICREA Professor at ICFO Maciej Lewenstein, in collaboration with researchers from the Laser Applications and Photonics group at the University of Salamanca and from CU Boulder, show that this new optical singularity can be applied to nonlinear optics, even at the high-intensity extremes and in non-perturbative situations.

There they show, via theoretical simulations, that the high-order harmonics produced by the torus-knot beams at ultra-high intensities preserve the coordinated symmetry of the driving laser, forming twisted spirals of ultra-short pulses of light, and that the torus-knot angular momentum is conserved in the interaction. This new symmetry is essential in understanding the production of shaped light at very short wavelengths, which can be used for novel applications in microscopy, lithography and spectroscopy.

The results of both studies provide new frameworks and results that advance the study of structured light and non-linear optics. On one hand, the researchers were able to find new conservation laws for non-linear optics which hold even in extreme situations where tens or hundreds of photons get combined to form single high-frequency photons. On the other, they analyzed the driving fields that make this possible and showed that they contain a new optical singularity, with a new degree of freedom that could be used to store valuable information, opening the possibility of using these new topologies of light for future communication applications, among others.

To protect kids and teens from firearm harm, answer these question first, experts

Helsinki declaration on planetary health calls for commitment from the EU

Scienmag Aug 13, 2019
With the help of new technology, the researchers of the University of Turku in Finland have gained more detailed…