MRIs for a more peaceful world 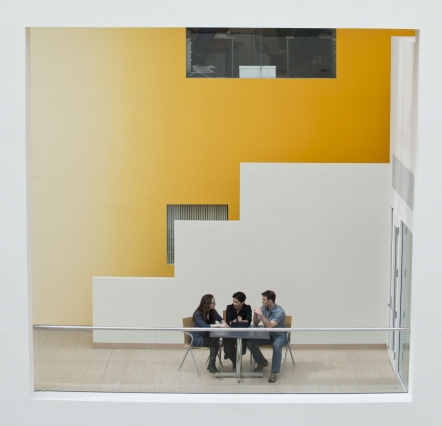 An MRI scanner is an unusual tool for resolving war and conflict, but an MIT collaboration now underway is deploying MRIs as an instrument for peace.

The goal of the collaboration — among the Social Cognitive Neuroscience Lab; the Department of Political Science; and Beyond Conflict, an international nongovernmental organization dedicated to global challenges to peace and reconciliation — is to use knowledge of neuroscience to develop innovative, more effective conflict-resolution strategies. Already the groups are putting into practice what they are learning in instances of extreme prejudice against Roma populations in Hungary, and between Israelis and Palestinians.

“The driving idea behind this collaboration is that big problems take different forms of expertise, and that each approach has something powerful to offer,” says Rebecca Saxe, professor of brain and cognitive sciences.

“We want to create a new framework of understanding of what drives humans to and away from conflict, not based on theories but based on shared human experience,” says Tim Phillips, cofounder of Beyond Conflict, which initiated the collaboration between the Saxe Lab and Department of Political Science. “It is revolutionary to break down these silos between disciplines but also to blend science and practice in the real world.”

“MRIs or neuroimaging give direct access to the entire brain. The hope is that this could bring more information that otherwise is too hard to measure,” says Bruneau, who has participated in conflict-resolution programs across the globe, including with Israelis and Palestinians, Americans and Mexican immigrants, and U.S. Republicans and Democrats.

“MRI scanners are one of the best ways to study the brain,” says Saxe. “Many things that happen during conflict are unpalatable. Or illegal. Sometimes, there are things about someone’s experience of conflict that they don’t know how to put into words. Neuroimaging has the advantage. Its power is that it can tell us when many things are happening simultaneously. And not only can we extract aspects of bias and empathy that people acknowledge, but also determine things they’re less willing to talk about.”

Marika Landau-Wells, a PhD student in political science and in MIT’s Comparative Politics and Security Studies Program — which focuses on war and conflict — is helping to bridge conflict resolution, neuroscience, and political science. Traditionally in political science, she says, there is an assumption that “more or less, we are all rational actors, and that if offered the right incentives, people will do the rational thing. But new lessons from neuroscience are teaching us that what people value, what generates strong emotional responses, are not always those rational things we assume. We’re often not even aware of some of the processes that are driving our behaviors.”

“It is likely that we all have biases, particularly biases we’re unaware of,” says Bruneau, adding that scientists offer the analogy of a man riding an elephant. The man represents the part of the brain we’re consciously aware of, the elephant the part we’re unaware of. “What’s difficult to measure is the elephant.”

Consider, he says, a dialogue program between Israelis and Palestinians designed to increase open-mindedness. “If you ask, ‘Are you open-minded?’ they’re motivated to say yes, because they want a good self-image. But that’s only the part of their brain they have access to. In reality, they might not know at all how open- or closed-minded they are. The MRI,” Bruneau says, “can determine that.”

“For neuroimaging to measure open-mindedness is for me one of the great hopes for this technology. A lot of outcome goals that we have for conflict-resolution programs are difficult to measure directly. Indirect measure holds the greatest promise.”

Bruneau believes that individuals are capable of making dramatic changes. “Japan and the U.S. were at war, and now just one generation later, we’ve gotten past much animosity,” he says. “The key is figuring out how they did it, and turning that into something we can consciously move along. We feel MRIs will help us get beyond differences better and faster.”