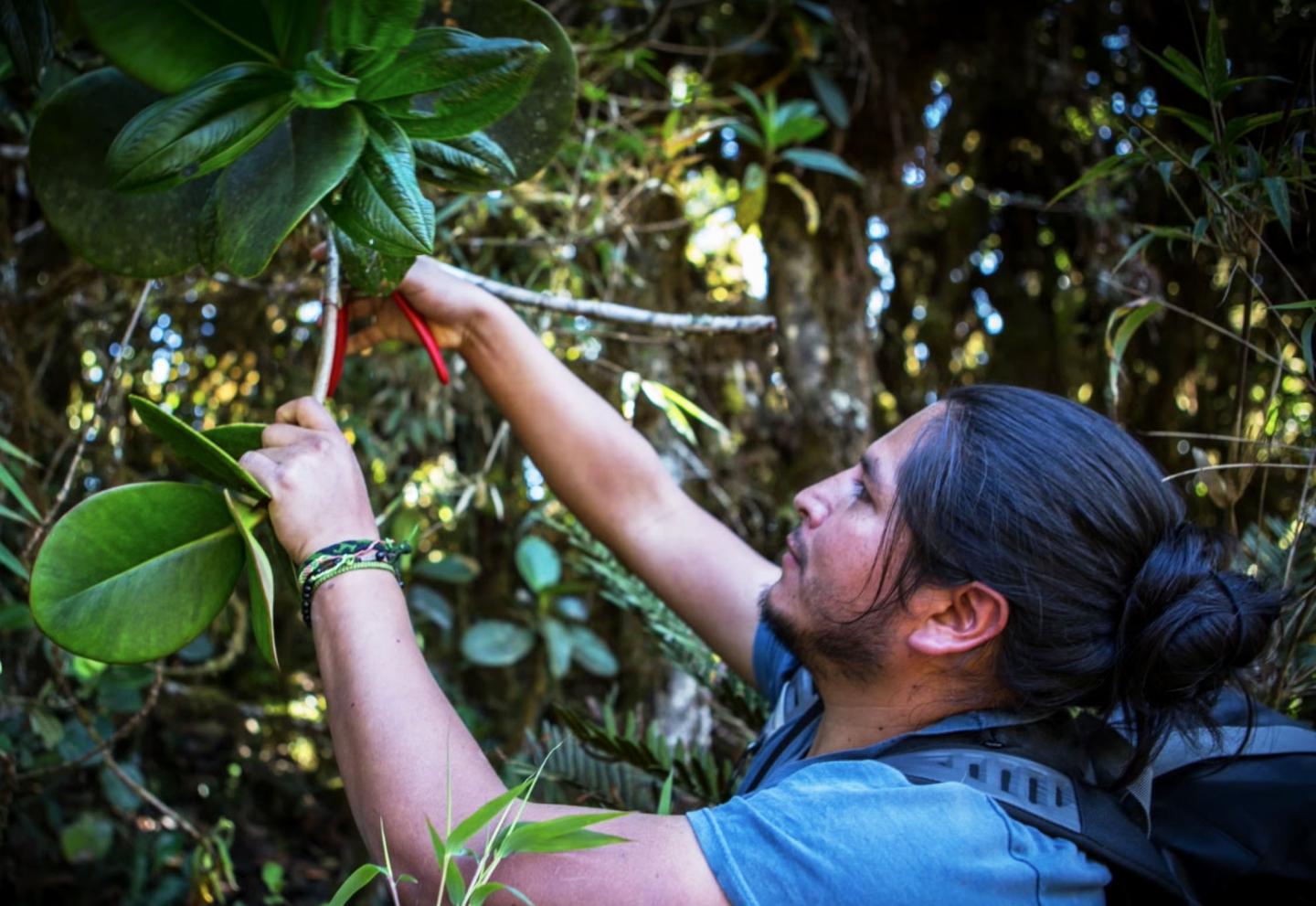 The Andes Mountains of South America are the most species-rich biodiversity hotspot for plant and vertebrate species in the world. But the forest that climbs up this mountain range provides another important service to humanity.

Andean forests are helping to protect the planet by acting as a carbon sink, absorbing carbon dioxide and keeping some of this climate-altering gas out of circulation, according to new research published in Nature Communications.

The study — which draws upon two decades of data from 119 forest-monitoring plots in Colombia, Ecuador, Peru, Bolivia and Argentina — was produced by an international team of scientists including researchers supported by the Living Earth Collaborative at Washington University in St. Louis. The lead author was Alvaro Duque from the Universidad Nacional de Colombia Sede Medellín.

“Based on the information that we have, Andean forests are a carbon sink — capturing more carbon than they emit,” said J. Sebastián Tello, a co-author of the study and a principal investigator for the Living Earth Collaborative working group titled, “A synthesis of patterns and mechanisms of diversity and forest change in the Andes: A global biodiversity hotspot.”

“The amount of carbon that is stored in the aboveground biomass in the stems and leaves of trees is actually increasing through time, potentially offsetting some of the carbon dioxide emissions that are released to the atmosphere,” said Tello, an associate scientist at the Center for Conservation and Sustainable Development at the Missouri Botanical Garden.

Tello leads the Madidi Project, a long-term study that the Missouri Botanical Garden has supported for nearly 20 years, involving plant diversity and forest change in Bolivia. Twenty-six of the forest plots included in this study were from the Madidi Project.

“Two critical research questions are how and why the functioning of ecosystems is being impacted by climate change,” added Jonathan Myers, associate professor of biology in Arts & Sciences at Washington University, another co-author of the new study. “Carbon storage is one of the most important ecosystem services that helps to mitigate the effects of rising carbon dioxide levels under climate change and temperature warming.

“This study provides insights into how species on the move, under climate change, might be impacting these broader ecosystem services important to humanity,” Myers said.

Carbon is an important building block of life on Earth, but the element contributes to global warming when it is released into the atmosphere as carbon dioxide. Living plant tissues such as the stems, bark, branches and twigs of trees can act as a carbon sink because they absorb carbon dioxide from the atmosphere during photosynthesis.

By locking in carbon, trees in forests around the world play a role in maintaining global climate stability. Some forests play a bigger role than others — the Andes prime among them, the study found.

Tropical and subtropical ecosystems are believed to account for nearly 70% of all the carbon sequestered by Earth’s forests. But previous estimates of tropical carbon uptake were largely based on studies of lowland ecosystems, such as the Amazon.

This study incorporates data from forest plots spanning a range of more than 3,000 meters (10,000 feet) in elevation across the subtropical and tropical Andes. The results indicate that the Andes are similar to other tropical forests in that they are acting as aboveground carbon sinks. However, the overall relative strength of the Andean carbon sink exceeds estimates from previous studies conducted in lowland tropical forests in Amazonia, Africa or Southeast Asia, the researchers discovered.

Factors such as precipitation, temperature and size-dependent mortality of trees tend to drive carbon storage dynamics in Andean forests.

Because of its vast size, the Amazon forest currently accumulates more carbon than the Andean forest. But recent research has suggested that the Amazon might become saturated with carbon in the near future. Under this scenario, the continued net uptake of carbon in Andean forests will become even more important.

As a neighbor to the relatively well-studied Amazon forest, much about Andean forest ecosystems remains comparatively unknown. Challenging mountain terrain combined with remoteness makes it harder for scientists to reach parts of the Andes. It’s also hard to secure funding to support large-scale research projects that span multiple countries.

“This paper collects and integrates information from lots of different research groups that have been working for decades independently,” Tello said. “It’s one of the first big efforts to bring together the scientists who have been monitoring these forests.”

William Farfan-Rios, a native of Cusco, Peru, and a postdoctoral research fellow of the Living Earth Collaborative, knows first-hand how difficult it is to conduct field research in the Andes. Since 2003, he has coordinated and led field campaigns and research projects with the Andes Biodiversity and Ecosystem Research Group, working along an elevational transect between the Andean and Amazonian forests in Peru. Farfan-Rios is also a co-author on the new study.

Farfan-Rios recalled the challenges associated with one particular forest survey effort, saying: “At the beginning, we were a team of 14 people from Cusco. And, at the end, I was the only one who was still surveying those plots. I was the only survivor of this initial team! Right now, I’m still collaborating with that group and using this information for my postdoc with the Living Earth Collaborative.”

In only 1% of the Earth’s land surface, the tropical Andes contain 15% of the world’s plant species, or about 45,000 species in total. Approximately half of these plants — about 20,000 species — are endemic, meaning they are only found in the Andes. In addition to harboring extreme levels of biodiversity, Andean forests provide and protect sources of food, water and power for more than 50 million people. However, global environmental change — including deforestation, human population growth and climate change — is endangering Andean biodiversity and ecosystem services.

“Building on William’s research and the finding that Andean forests are important carbon sinks and targets for conservation, it’s important to understand how upward species migrations that are occurring under climate change might sustain those ecosystem services or functions in the future,” Myers said. “Conservation initiatives not only support current forest biodiversity, but also habitats for species that will migrate to new areas in the future.”

This research was funded in part by the Living Earth Collaborative and the International Center for Energy, Environment and Sustainability at Washington University.