The Icahn School of Medicine at Mount Sinai has launched a new research center devoted to understanding how epigenomics influences the nervous system under both healthy and disease conditions. The Center for Neural Epigenome Engineering aims to dramatically expand Mount Sinai’s ability to conduct research in this field, facilitating new discoveries and the development of long-sought treatments for a variety of neurological and psychiatric disorders. Areas of expansion include chromatin biochemistry, chemical biology, protein engineering, and single-cell “omics.” 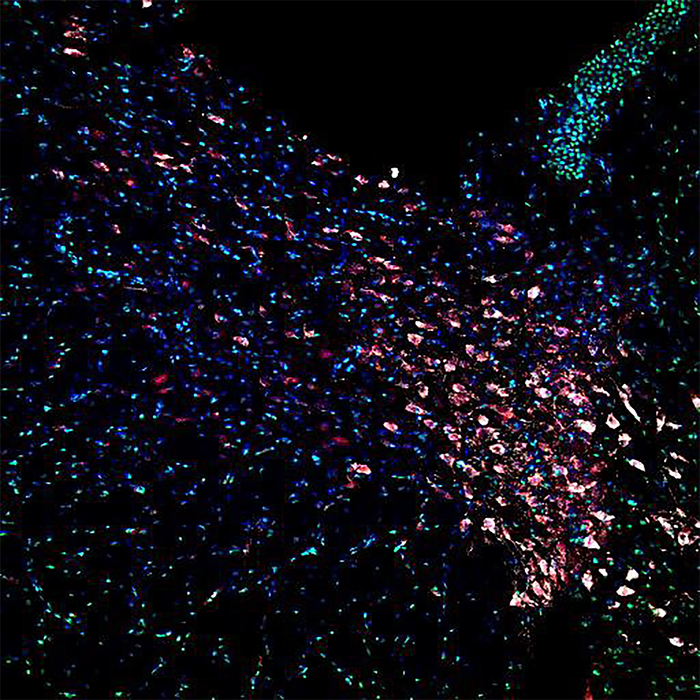 The Icahn School of Medicine at Mount Sinai has launched a new research center devoted to understanding how epigenomics influences the nervous system under both healthy and disease conditions. The Center for Neural Epigenome Engineering aims to dramatically expand Mount Sinai’s ability to conduct research in this field, facilitating new discoveries and the development of long-sought treatments for a variety of neurological and psychiatric disorders. Areas of expansion include chromatin biochemistry, chemical biology, protein engineering, and single-cell “omics.”

“At Mount Sinai, we are devoted to deciphering the nervous system’s epigenomic codes,” said Ian Maze, PhD, Howard Hughes Medical Institute (HHMI) Investigator; Professor of Neuroscience, and Pharmacological Sciences, at Icahn Mount Sinai; and leader of the new center. “Our hope for the Center for Neural Epigenome Engineering is that it will be a place where Mount Sinai’s neuroscientists can employ the latest epigenomic concepts and methods while working side by side with multidisciplinary experts in the field of chromatin biology. We feel this will create an environment that is currently needed to both decipher neural epigenomic codes and translate findings into potential treatments for diseases.”

Epigenomics describes a set of molecular and chemical processes which moderate the relationship between genes and the environment that produce traits. These processes alter genetic activity and the structure of chromatin, the mixture of proteins and DNA that form chromosomes, without changing gene sequences. The processes have been shown to guide the growth and development of newborn cells, control the activity of cancer and immune cells, and, more recently, play critical roles in neurological and psychiatric disorders.

“The application of epigenomics to neuroscience started about 20 years ago and it has revolutionized our ability to get a handle on the complex interactions between genes, the brain, and behavior,” said Eric J. Nestler, MD, PhD, Director of The Friedman Brain Institute at Mount Sinai and a pioneer in the field. “The launching of the new center is a milestone moment for the field of neural epigenomics.”

Dr. Maze’s interest in neural epigenomics also began about 20 years ago. He was in college and getting honeybees drunk. It was all part of a study into how alcohol affects the brain.

“What really struck me at that time was how profoundly alcohol can change an animal’s behavior, even at times long after the booze had worn off,” said Dr. Maze. “In other words, I felt that it must be doing something more than simply temporarily altering the brain’s chemistry. That’s when I had a hunch that we should be looking at the brain’s genes for clues.”

He then sought answers in labs across the country, performed hundreds of experiments, became obsessed with the fields of epigenomics and chromatin biology, and published game-changing studies on how the brain works.

For example, from 2019-2022, the Maze lab published a series of seminal scientific articles that redefined the roles that the neurochemicals dopamine and serotonin play in the brain and how these events may contribute to cocaine and heroin addiction.

Traditionally, these chemicals were known to work, externally, as messengers that relay neural signals from one cell to another. Dr. Maze’s team showed that dopamine and serotonin can also get inside the nucleus of neurons and epigenomically alter long-term genetic activity. In two recent articles, the team showed that blocking this novel action by dopamine could counter the effects of cocaine and heroin addiction in rats.

“To neuroscientists, these were completely unexpected and paradigm-shifting findings,” said Paul Kenny, PhD, Chair of the Nash Family Department of Neuroscience at Icahn Mount Sinai. “The results revealed a previously unrecognized and entirely new function of neurotransmitters in the brain and expanded the possibilities for how neurotransmitters modify brain function during the development of addiction.”

The experience Dr. Maze had with making these and other discoveries has informed many of the goals set for the new research center.

“One of the major challenges of neural epigenomics is that it still remains a relatively unexplored area of research which often requires the development of novel methodologies and tools needed to truly explore and understand the biological impact of these diverse phenomena. In our experience, this requires working with a variety of experts, such as chromatin biochemists, chemical biologists, and protein engineers. Their unique perspectives often provide the spark for innovation and discovery,” said Dr. Maze. “The new center will thus focus on five key areas. We plan to apply these lessons to developing each area.”

The five areas are: