This press release and accompanying multimedia are available online at: https://news.agu.org/press-release/ mounds-of-ice-in-craters-give-new-insight-into-mars-past-climate 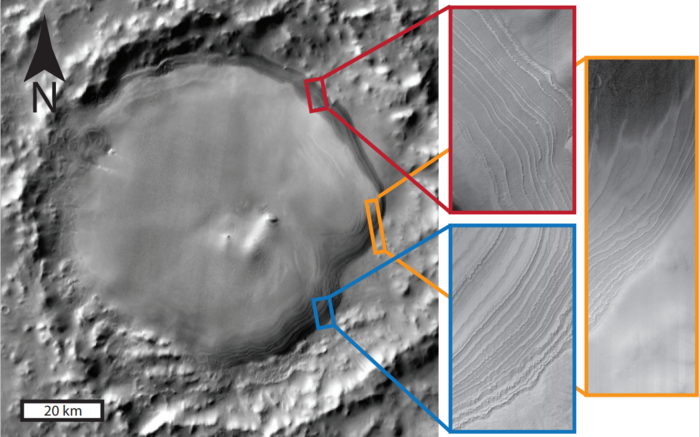 This press release and accompanying multimedia are available online at: https://news.agu.org/press-release/ mounds-of-ice-in-craters-give-new-insight-into-mars-past-climate

WASHINGTON—Newly discovered deposits of layered ice in craters scattered around Mars’ southern hemisphere provide insights into how the planet’s orientation controlled the planet’s climate over the past 4 million years, according to a new study. The findings help scientists understand what controlled Mars’ past climate, which is essential for predicting when the planet could have been habitable.

The study was published in the AGU journal Geophysical Research Letters, which publishes short-format, high-impact research with implications spanning the Earth and space sciences.

Ice deposits on Mars reflect a combination of temperature, hydrology and planetary dynamics, as they do on Earth. The planet’s tilt and orbit impact temperature and sunlight on the surface, which contribute to climate. Thicker, more pure ice layers generally reflect cold periods with more ice accumulation, while thin, dusty layers were likely warmer and less able to build up ice.

The new study matches these ice layers to the tilt of Mars’ axis and its orbital precession, or how the planet’s elliptical orbit rotates around the sun over time, with unprecedented resolution and confidence.

The findings give scientists insight into how Mars’ climate has changed over time. While the study is limited to the recent past, establishing these climate-orbit relationships helps scientists understand Martian climate deeper in the past, which could help pinpoint periods of potential habitability.

“It was unexpected how cleanly those patterns matched to the orbital cycles,” said lead study author Michael Sori, a planetary scientist at Purdue University. “It was just such a perfect match, as good as you can ask for.”

From caps to craters

Previously, Martian climate scientists have focused on polar ice caps, which span hundreds of kilometers. But these deposits are old and may have lost ice over time, losing fine details that are necessary to confidently establish connections between the planet’s orientation and motion and its climate.

Sori and his colleagues turned to ice mounds in craters, just tens of kilometers wide but much fresher and potentially less complicated. After scouring much of the southern hemisphere, they pinpointed Burroughs crater, 74 kilometers wide, that has “exceptionally well-preserved” layers visible from NASA HiRISE imagery, Sori said.

The researchers analyzed the layers’ thicknesses and shapes and found they had strikingly similar patterns to two important Martian orbital dynamics, the tilt of Mars’ axis and orbital precession, over the last 4 to 5 million years.

The findings improve on previous research, which used Mars’ polar ice records of climate to establish tentative connections to orbit. But those records were too “noisy,” or complicated, to confidently connect the two. Younger, cleaner crater ice preserves less complicated climate records, which the researchers used to match climate changes to orbital precession and tilt with a high level of precision.

Mars as a natural lab

Discerning the connections between orbital cycles and climate is important for understanding both Martian history and complex climate dynamics on Earth. “Mars is a natural laboratory for studying orbital controls on climate,” Sori said, because many of the complicating factors that exist on Earth — biology, tectonics — are negligible on Mars. The whole planet, in essence, isolates the variable for scientists.

“If we’re ever going to understand climate, we need to go to places that don’t have these interfering factors,” said Isaac Smith, a planetary scientist at the Planetary Science Institute and York University who was not involved in the study. In that sense, “Mars is a pristine planet. And there are a lot of potential applications here. Mars has a lot more in common with Pluto and Triton than you think.”

Not all smaller ice deposits have clean, exposed layers at their surface. Some might be hidden inside the mounds. Eventually, Sori said, the goal is to sample ice cores like scientists do on Earth, but Mars rovers don’t have that capability yet. Instead, scientists can use ground-penetrating radar data to “peer inside” the ice and check for layers, making sure visible layers extend throughout the deposit. It’s a necessary quality-control step in the present study, and the method may help future explorations of Martian ice without layers visible at the surface.

“Being able to pull a climate signal from a small ice deposit is a really cool result,” said Riley McGlasson, a study co-author from Purdue University who applied this method in the new study. “With radar, we can get closer to the full story. That’s why I’m excited to take this a step further in the future.”

Notes for journalists:
This research study is available online for free until the end of the month. Download a PDF copy of the paper here. Neither the paper nor this press release is under embargo.