Mothers use the benefits of song to promote infant development 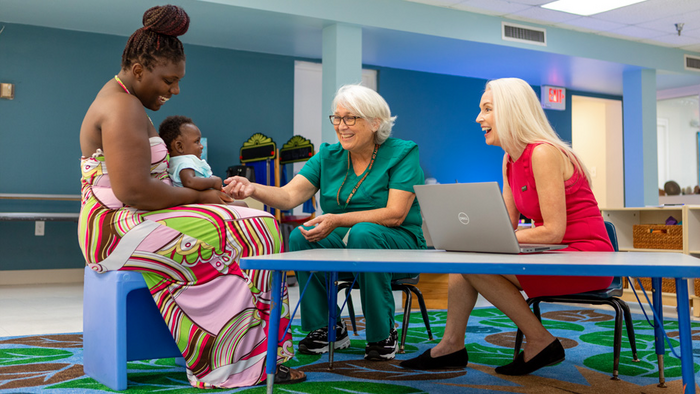 As a young music therapist in Colorado, de l’Etoile saw that when disadvantaged mothers were encouraged to sing to their babies, they were amazed by the positive responses they received. She quickly realized that music could be a powerful tool to help mothers learn more about their infants and to build a relationship with their new child.

“If a mother can sing in a way that captures the infant’s attention, it can help them tap into those brain structures that they need to develop for self-regulation,” said de l’Etoile, a board-certified music therapist and associate dean of graduate studies at the University of Miami Frost School of Music.

Yet, while singing to infants is something most mothers do naturally—without even realizing the benefits—for those in difficult circumstances, infant-directed singing may not be as instinctive, de l’Etoile observed. She has noticed that mothers impacted by depression, domestic violence, or substance exposure may need encouragement and guidance to provide this unique form of caregiving.

“Infant-directed singing is a way that mothers communicate with their babies that most infants can recognize and respond to. But to be most effective, the mother needs to be attentive and sensitive to infant cues,” said de l’Etoile. “For some moms that may not be happening and that impacts the infant.”

But because infant-directed singing is so advantageous, de l’Etoile is working with the College of Arts and Sciences Department of Psychology’s flagship early intervention program at the Linda Ray Intervention Center to create a coaching program that will guide mothers in the practice.

Recently, de l’Etoile’s efforts received support from the GRAMMY Museum Grant Program, a division of the National Academy of Recording Arts and Sciences. This funding will sponsor her pilot study to train mothers of infants at the center in the critical caregiving skill. The study is one of just six scientific research projects that earned funding from the organization this year.

For close to three decades, the Linda Ray Intervention Center, which serves children from birth to age 2, has been the site of some of the most cutting-edge research in the nation. That research focuses on the developmental needs of at-risk infants and how to best support mothers in building secure bonds with their children.

“We want to give moms and caregivers these tools they can use, so that they can feel empowered to help their babies thrive,” de l’Etoile said. “Building self-regulation at an early age is so important because it helps children deal with adversity. Children who don’t regulate well are lacking in resilience, and they may have problems later in life, like obesity, addiction, and aggression.”

De l’Etoile and the center’s executive director, Isabel Chica, are now in the process of identifying and training staff members at the center, who will coach mothers for a month in the most beneficial ways to sing to their infants. The process includes watching and recording mothers as they sing to their infants and then demonstrating to these mothers how they can be sensitive to their infants’ emotions while singing. Mothers will be able to notice if the infant is benefiting because the baby will gaze longer at the mother and reach a contented state.

Chica believes the project is a great fit for the center.

“One of our main goals is to provide families with opportunities to learn new strategies and techniques that support positive parent-child interactions, and this pilot may strengthen parenting skills as well as a parent’s ability to help their child self-regulate,” Chica said. “We believe this is a great way for healthy attachments to develop between parent and child.”

As part of the study, after each mother completes the training, de l’Etoile will work with the Frost School’s music engineering program to analyze recordings of the mother’s voice. Ideally, the analysis will reveal changes over time in the mother’s ability to modify their singing according to the infant’s emotions. Videos of the babies will also be analyzed to determine engagement with the mother over time, tracked through their gaze (whether they are focused on the mother), as well as their level of comfort, revealed in the baby’s facial cues.

“For an infant to make progress toward self-regulation, they need focused attention on the mother. And they also need to have achieved an optimal level of arousal where they are not excited, or fussy, but comfortable,” she said.

The project also signals a new frontier for de l’Etoile, who in the past has documented how infant-directed singing occurs naturally, in both typical and clinical populations, including mothers with post-partum depression and infants with Down syndrome. In this project, she is providing a community-based, infant-directed singing intervention and is thrilled to work with the Linda Ray Intervention Center.

For more than two years, de l’Etoile has been working closely with center staff to develop the program so that it aligns with the needs of their families. The staffers will soon begin coaching some of the mothers, and both Chica and de l’Etoile are eager to begin.

“We want this project to have a lasting legacy and impact, not just for us to have positive outcomes but to create a model for how a program like this could be implemented in other early intervention facilities,” de l’Etoile said.