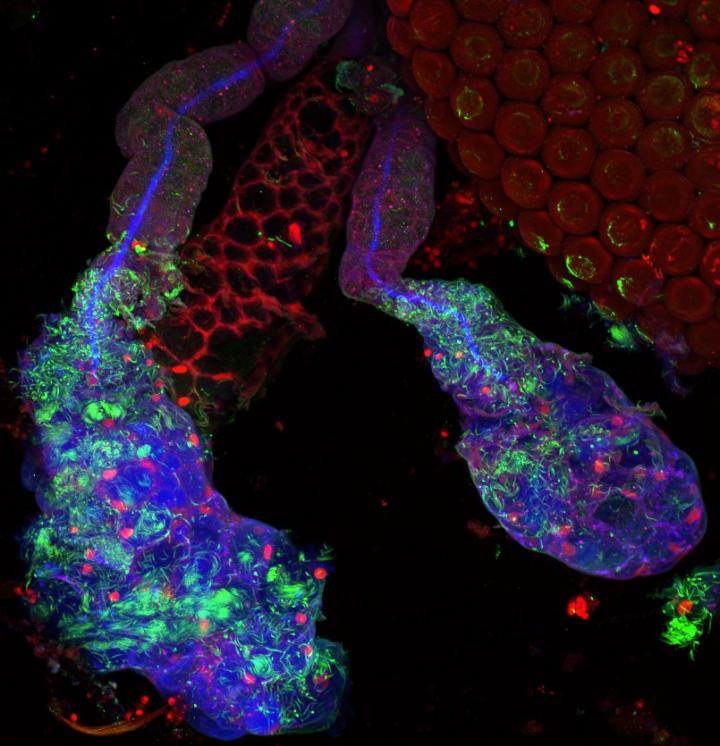 Mosquitoes can harbor thousands of malaria-causing parasites in their bodies, yet while slurping blood from a victim, they transmit just a tiny fraction of them. In an effort to define precisely the location of the parasite bottleneck, Johns Hopkins Medicine scientists say they have discovered that the parasites are stopped by a roadblock along the escape route in the insect’s spit glands, a barrier that could potentially serve as a novel target for preventing or reducing malarial infection.

“Our findings add substantial detail to the role of mosquito salivary glands as the gateway organs for diseases spread by these insects,” says Deborah Andrew, M.S., Ph.D., professor of cell biology at the Johns Hopkins University School of Medicine. “By enhancing transmission barriers that naturally exist in mosquitos, we potentially can block the spread of malaria and other deadly mosquito-borne diseases, like Zika fever.”

An estimated 220 million people worldwide, mostly in tropical and subtropical regions, have malaria, and more than 400,000 die of the parasite infection each year, according to the World Health Organization. Marked by disabling fever, chills, fatigue and sweating, the disease can be treated with drugs and prevented with mosquito eradication programs, but the high costs of drugs and eradication methods consistently hamper efforts to reduce malaria’s prevalence. Other mosquito-borne diseases, including dengue fever, strike scores of millions more.

A description of the research is published in the Aug. 6 issue of the journal mBio.

Malaria parasites are dependent on female Anopheles mosquitoes to spread in a complex life cycle that begins when mosquitos eat male and female parasite sex cells during a blood meal from an infected animal host. The cells wind up in the mosquito’s gut, where they fuse to form fertilized eggs that then squeeze through the gut’s lining and become encased in cysts in the insect’s body cavity. In these cysts, the parasites begin a reproductive frenzy, making more and more copies of themselves. When the cysts finally burst, the parasites raid the salivary gland by the hordes, ready to be squirted out when the mosquito takes its next blood meal. But scientists have long observed that most of them never make it out of the mosquito.

“Even though thousands of parasites invade the salivary gland, less than a 10th of them are transmitted during a mosquito bite,” says Michael Wells, Ph.D., postdoctoral researcher in Andrew’s laboratory and the study’s lead author. “So, we knew that the salivary gland is blocking the parasites from getting out, but we didn’t know exactly how.”

The Anopheles mosquito’s salivary gland is made up of three lobes of saliva-producing cells. The lobes are encased in a protective sheet called the basement membrane, and in each lobe are long ducts that extend into the insect’s mouth. For release, the parasites must first go through the basement membrane, penetrate a layer of salivary cells and then swim across a space called the secretory cavity to reach the salivary duct.

To study how the salivary gland might obstruct malaria transmission, the researchers first let Anopheles mosquitoes feed on rodent blood enriched with malaria parasites. Since the mosquitoes decided how much they ate, each one consumed a different quantity of parasites. This offered the researchers data for different quantities of parasitic infection from hundreds of mosquito salivary glands.

The researchers then systematically mapped out the parasites’ location by dissecting salivary glands from these mosquitos and looking for the parasites under high-powered microscopes. They found that most parasites were either inside the basement membrane or in the secretory cavity. But only a few parasites were in the salivary ducts.

“The parasites seem to have no trouble getting into the salivary glands,” says Wells. “So, this told us that the obstruction happens later, when parasites are trying to get to the salivary duct.”

Next, the researchers zoomed in on the cell layers in each lobe of the salivary gland. They found that most parasites appeared unable to leave the secretory cavity and were congregating at a fibrous, sturdy wall made of a substance called chitin that forms around the salivary ducts.

Some parasites, however, were able to tunnel through the chitin wall and reach the salivary duct, but like traffic bottlenecks, the narrow opening they burrowed into allowed only a few parasites to pass through. Wells says the lucky parasites that make it through the tough duct wall are likely the ones that are released during a bite.

If the chitin wall around salivary ducts can be fortified, infections may be thwarted. “Our study is a first step in better understanding how salivary glands in malaria-carrying mosquitoes limit the transmission of disease parasites,” says Andrew. “In the future, we hope this information will advance strategies to limit transmission and uncover how other insects have evolved ways to affect disease transmission.”

The research was supported by the National Institutes of Health (NIH RO1DE013899), a Johns Hopkins Malaria Research Institute postdoctoral fellowship and Bloomberg Philanthropies.