Tsukuba, Japan—Most people probably think of fruit flies as just an annoyance around the fruit bowl. Now, researchers from Japan have discovered that these tiny flies could help to answer some big questions about ecology and evolution. 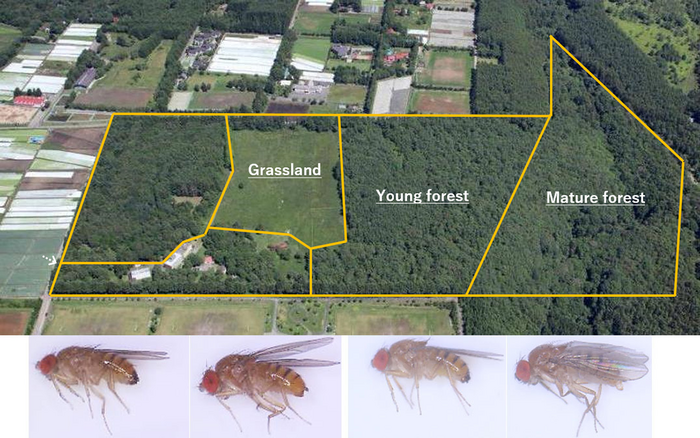 Tsukuba, Japan—Most people probably think of fruit flies as just an annoyance around the fruit bowl. Now, researchers from Japan have discovered that these tiny flies could help to answer some big questions about ecology and evolution.

In a study published this month in Applied Entomology and Zoology, researchers from the University of Tsukuba have revealed that two closely related species of Drosophila coexist in the same places because of differences in exactly where and when they appear.

Species that are closely related often overlap geographically and have similar resource needs, which may result in competition. Additionally, these species are expected to interact reproductively; if this happens often, it may lead to the exclusion of one of the species via hybridization and/or reproductive interference (i.e., engagement in reproductive activities by individuals of one species with those of another, resulting in a reduction of fitness of one or both). Therefore, for these species to stably coexist, mechanisms must be in place that prevent reproductive interactions and competition.

“To discover how often these species come into contact and how strong their interactions are, research is needed on the species’ occurrence in time and space at a fine and local scale,” says Professor Yukie Sato, a senior author of the study. “To this end, we conducted such a study in a species complex of Drosophila fruit flies.”

Although the researchers expected female mate preference for males of the same species to play a key role in minimizing reproductive interaction between the species, the discovery of abnormal genital structures in a few males also revealed the potential for hybridization.

“Although the cause of these abnormalities is unknown—they may have been the result of environmental factors—hybridization may be at play. To clarify this, future genetic and hybridization studies will be needed,” says Professor Sato.

The results of this study will contribute to an improved understanding of how closely related species coexist, which is a major focus of the fields of ecological and evolutionary research.

###
This study was partly supported financially by the COE for Education of Forest and Grassland Biodiversity and Natural History Science in the Sugadaira Kogen Research Center, University of Tsukuba (FY 2013-2017 MEXT Joint Usage Education Centers by the Minister of Education, Culture, Sports, Science and Technology) and by Support for Pioneering Research Initiated by the Next Generation from the Japan Science and Technology Agency (JPMJSP2124 to MO).

The article, “Habitat and seasonal occurrence differ among closely related species of the Drosophila auraria species complex (Diptera: Drosophilidae),” was published in Applied Entomology and Zoology at DOI: 10.1007/s13355-022-00801-w