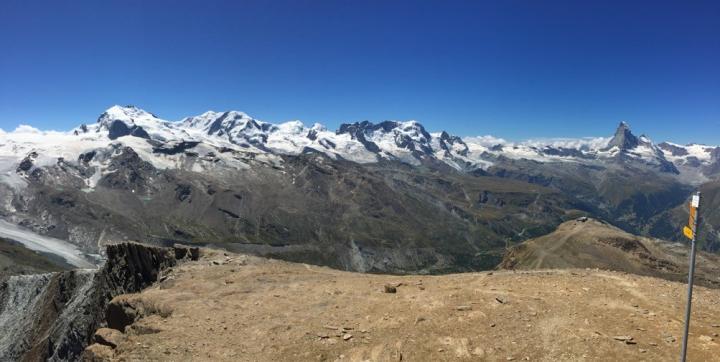 From time to time, there have been long periods of cooling in Earth’s history. Temperatures had already fallen for more than ten million years before the last ice age began about 2.5 million years ago. At that time the northern hemisphere was covered with massive ice masses and glaciers. A geoscientific paradigm, widespread for over twenty years, explains this cooling with the formation of the large mountain ranges such as the Andes, the Himalayas and the Alps. As a result, more rock weathering has taken place, the paradigm suggests. This in turn removed more carbon dioxide (CO2) from the atmosphere, so that the ‘greenhouse effect’ decreased and the atmosphere cooled. This and other processes eventually led to the ‘ice Age’.

In a new study, Jeremy Caves-Rugenstein from ETH Zurich, Dan Ibarra from Stanford University and Friedhelm von Blanckenburg from the GFZ German Research Centre for Geosciences in Potsdam were able to show that this paradigm cannot be upheld. According to the paper, weathering was constant over the period under consideration. Instead, increased ‘reactivity’ of the land surface has led to a decrease in CO2 in the atmosphere, thus cooling the Earth. The researchers published the results in the journal Nature.

A second look after isotope analysis

The process of rock weathering, and especially the chemical weathering of rocks with carbonic acid, has controlled the Earth’s climate for billions of years. Carbonic acid is produced from CO2 when it dissolves in rainwater. Weathering thus removes CO2 from the Earth’s atmosphere, precisely to the extent that volcanic gases supplied the atmosphere with it. The paradigm that has been widespread so far states that with the formation of the large mountains ranges in the last 15 million years, erosion processes have increased – and with them also the CO2-binding rock weathering. Indeed, geochemical measurements in ocean sediments show that the proportion of CO2 in the atmosphere has strongly decreased during this phase.

“The hypothesis, however, has a big catch,” explains Friedhelm von Blanckenburg of GFZ. “If the atmosphere had actually lost as much CO2 as the weathering created by erosion would have caused, it would hardly have had any CO2 left after less than a million years. All water would have had frozen to ice and life would have had a hard time to survive. But that was not the case.”

That these doubts are justified, was already shown by von Blanckenburg and his colleague Jane Willenbring in a 2010 study, which appeared in Nature likewise. “We used measurements of the rare isotope beryllium-10 produced by cosmic radiation in the Earth’s atmosphere and its ratio to the stable isotope beryllium-9 in ocean sediment to show that the weathering of the land surface had not increased at all,” says Friedhelm von Blanckenburg.

In the study published now, Caves-Rugenstein, Ibarra and von Blanckenburg additionally used the data of stable isotopes of the element lithium in ocean sediments as an indicator for the weathering processes. They wanted to find out how, despite constant rock weathering, the amount of CO2 in the atmosphere could have decreased. They entered their data into a computer model of the global carbon cycle.

Indeed, the results of the model showed that the potential of the land surface to weather has increased, but not the speed at which it weathered. The researchers call this potential of weathering the ‘reactivity’ of the land surface. “Reactivity describes how easily chemical compounds or elements take part in a reaction,” explains Friedhelm von Blanckenburg. If there are more non-weathered and therefore more reactive rocks at the surface, these can in total react as extensively chemically with little CO2 in the atmosphere as already heavily weathered rocks would do with a lot of CO2. The decrease in CO2 in the atmosphere, which is responsible for the cooling, can thus be explained without an increased speed of weathering.

“However, a geological process is needed to rejuvenate the land surface and make it more ‘reactive’,” says Friedhelm von Blanckenburg.”This does not necessarily have to be the formation of large mountains. Similarly, tectonic fractures, a small increase in erosion or the exposure of other types of rock may have caused more material with weathering potential to show at the surface. In any case, our new hypothesis must trigger geological rethinking regarding the cooling before the last ice age.”