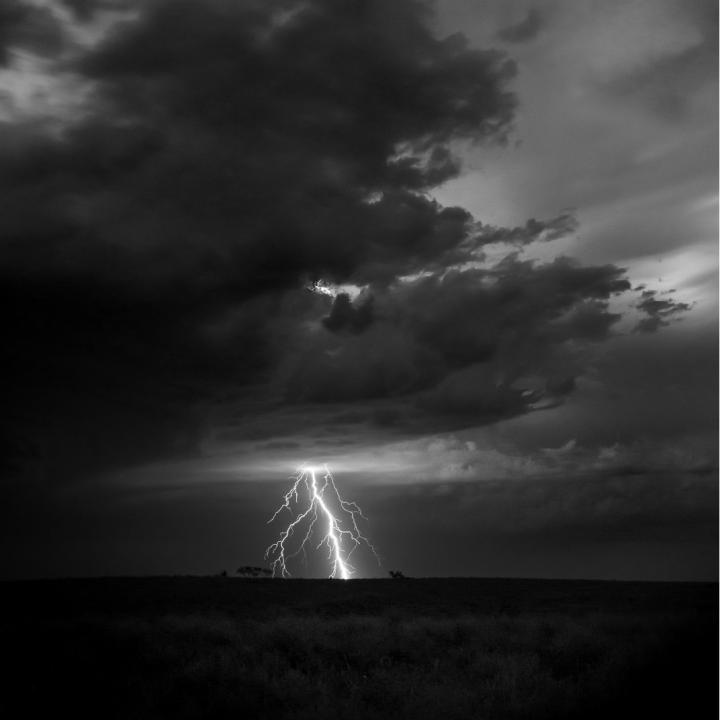 Large thunderstorms in the Southern Great Plains of the U.S. are some of the strongest on Earth. In recent years, these storms have increased in frequency and intensity, and new research shows that these shifts are linked to climate variability.

Co-authored by Christopher Maupin, Courtney Schumacher and Brendan Roark, all scientists in Texas A&M University’s College of Geosciences, along with other researchers, the findings were recently published in Nature Geoscience.

In the study, researchers analyzed oxygen isotopes from 30,000-50,000 year old stalactites from Texas caves to understand trends in past thunderstorms and their durations, using radar-based calibration for the region’s rainfall isotopes. They discovered that when storm regimes shift from weakly to strongly organized on millennial timescales, they coincide with well-known, global abrupt climate shifts during the last glacial period, which occurred between about 120,000 and 11,500 years ago.

Through modern-day synoptic analysis, researchers learned that thunderstorms in the Southern Great Plains are strongly related to changes in wind and moisture patterns occurring at a much larger scale. Understanding these changes and various correlations will not only help reconstruct past thunderstorm occurrences, but also help predict future mid-latitude thunderstorm patterns.

“However, we don’t know what will happen in the future, and this work will help predict trends of storms in the future,” she said. “If we can run a climate model for the past which is consistent with cave records, and run that same model moving forward, we can trust its findings more if it matched the cave records versus if they didn’t. Out of two models, if one really matches the cave isotopes then you can trust that one in understanding storm distribution in the future.”

Maupin, a paleoclimatologist, described the limitations that exist in capturing the true distribution of weather events across time.

“There are really important questions about what has happened in the past regarding big weather events we get through mesoscale convective systems (large storms) versus non-mesoscale (smaller storms) stuff,” Maupin said. “We get so much precipitation from really big storms, and model grids can’t capture big weather events, because the grids themselves are so big. Paleoclimatology helps with organizing past events to develop a proxy record of how they respond to mean climate.”

Maupin collaborated with National Taiwan University to do uranium thorium dating, and discovered that the stalactites and stalagmites were in fact from around the Ice Age.

Schumacher’s expertise was needed to make connections with various rainfall events that occurred over time. She had experience working with radar data and rain measurements on a global scale.

“Large storms that cover hundreds of miles provide around 50-80% of rain in Texas,” Schumacher said. “In the modern day, these storms have different isotope signatures.”

Maupin’s research is pushing back on outdated principles in the paleo-world, because you have to study how storms get larger and what influences them, he said.

“These thunderstorms are so big that even if most of the rain occurs in Oklahoma, rain in Texas will still carry isotopic signature of these huge storms,” Maupin stated. “You’re fingerprinting these systems despite where they occur, and they don’t have to be super localized to be recognized. Big storms cause depleted isotopic signatures. You can’t explain the variability in stalactites with temperature changes alone.”

Celia Lorraine McChesney ’16 and Audrey Housson ’16 were two undergraduate researchers involved in this publication, and both learned a great deal through the field work, collaboration, and high-impact learning experience.

“The samples from the caves were used as a tool for high-impact learning in understanding Texas paleoclimate,” Maupin said. “One of the undergraduates started micro-milling the stalactites. I was very fortunate to have access to the College of Geosciences’ resources and to work with these talented undergrads on ground-breaking research.”

McChesney said her experience working on her senior thesis at the lab was “invaluable,” and the research allowed her to travel and go out into the field.

“As an undergraduate research student at Texas A&M, I was proud to be part of one of the first teams to correlate climate change and weather linkages in a paleoclimate record,” Housson said. “This whole experience provided great exposure to the academic world, and made me more confident as a scientist. Now, as a geologist and civil engineer, I am working on heavy civil infrastructure projects like tunnels and dams related to water resources. I love how my career ties back into my undergraduate research where knowing the correlation between climate change and weather helps plan for water resources in the future.”

Funding for this research was provided in part by a Texas A&M University high-impact undergraduate research grant.