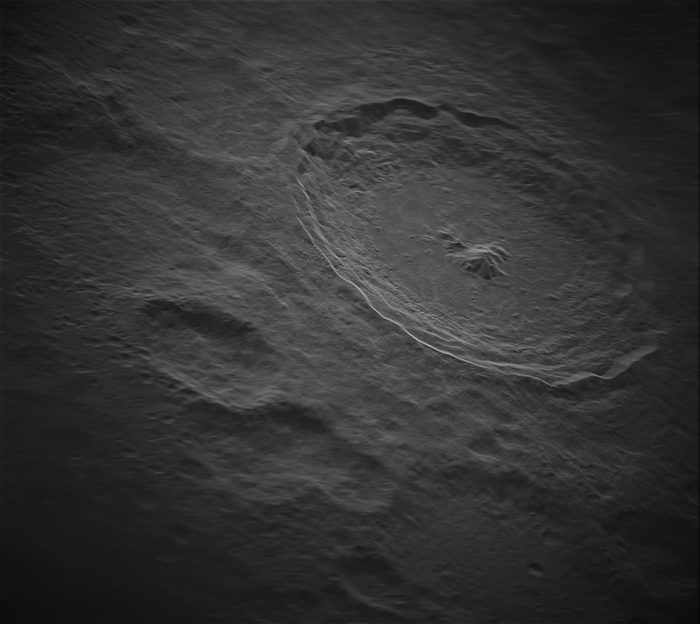 The resolution of the new Tycho Crater image is close to five meters by five meters and contains approximately 1.4 billion pixels. The image covers an area of 200km by 175km, ensuring that involved scientists and engineers captured the entire crater, which measures 86km in diameter. “This is the largest synthetic aperture radar image we have produced to date with the help of our partners at Raytheon,” said Dr. Tony Beasley, Director of the National Radio Astronomy Observatory, and vice president for Radio Astronomy at Associated Universities, Inc. (AUI). “While more work lies ahead to improve these images, we’re excited to share this incredible image with the public, and look forward to sharing more images from this project in the near future.”

The GBT— the world’s largest fully steerable radio telescope—was outfitted in late 2020 with new technology developed by Raytheon Intelligence & Space and GBO, allowing it to transmit a radar signal into space. Using the GBT and antennas from the Very Long Baseline Array (VLBA), several tests have been conducted since that time, focusing on the surface of the Moon, including the Tycho Crater and NASA Apollo landing sites.

How is this low-powered radar signal translated into images we can see? “It’s done with a process called Synthetic Aperture Radar, or SAR,” explained Galen Watts, a GBO engineer. “As each pulse is transmitted by the GBT, it’s reflected off the target, the surface of the moon in this case, and it’s received and stored. The stored pulses are compared to each other and analyzed to produce an image. The transmitter, the target, and the receivers are all constantly moving as we move through space. While you might think this could make producing an image more difficult, it actually yields more important data.”

This movement causes slight differences from radar pulse to pulse. These differences are examined and used to compute an image resolution higher than what is possible with stationary observations, as well as to increase the resolution of the distance to the target, how fast the target is moving toward or away from the receiver, and how the target is moving across the field of view. “Radar data like this has never been recorded before at this distance or resolution,” said Watts. “This has been done before at distances of a few hundred km, but not on the hundreds of thousands of kilometers scales of this project, and not with the high resolutions of a meter or so at these distances. It all takes a lot of computing hours. Ten or so years ago it would have taken months of computing to get one of the images from one receiver, and maybe a year or more from more than one.”

These promising early results have garnered support for the project from the scientific community and in late September the collaboration received $4.5 million in funding from the National Science Foundation for designing ways the project could be extended (Mid-scale Research Infrastructure-1 design award AST-2131866).  “After those designs, if we can attract full funding support, we will be able to build a system hundreds of times more powerful than the current one and use it to explore the Solar System,” said Beasley. “Such a new system would open a window into the Universe, allowing us to see our neighboring planets and celestial objects in a whole new way.”

West Virginia has a long history of facilities that have made significant contributions to expanding our scientific knowledge of the Universe. West Virginia Senator Joe Manchin III shared, “The new images and details of the Tycho Crater on the Moon found using radar technology on the Green Bank Telescope show that incredible advances in science are being made right here in West Virginia. For more than two decades, the GBT has helped researchers explore and better understand the Universe. Through my seat on the Commerce, Justice and Science Appropriations Subcommittee, I have been strongly supportive of these technological advances at GBT, which will now allow the GBT to transmit radar signals to space and ensure its critical role in astronomy research for years to come. I look forward to seeing more incredible images and future discoveries of our Solar System, and I will continue to work with the National Science Foundation to advocate for funding to support projects at the Green Bank Observatory.

This technology has been years in the making, part of a cooperative research and development agreement between NRAO, GBO, and RI&S. A future high-power radar system combined with the sky coverage of the GBT will image objects in the Solar System with unprecedented detail and sensitivity. Expect more exciting images to come this fall, as processing these early data with tens of billions of pixels of information is worth the wait.

The National Radio Astronomy Observatory and the Green Bank Observatory are facilities of the National Science Foundation, operated under cooperative agreement by Associated Universities, Inc.