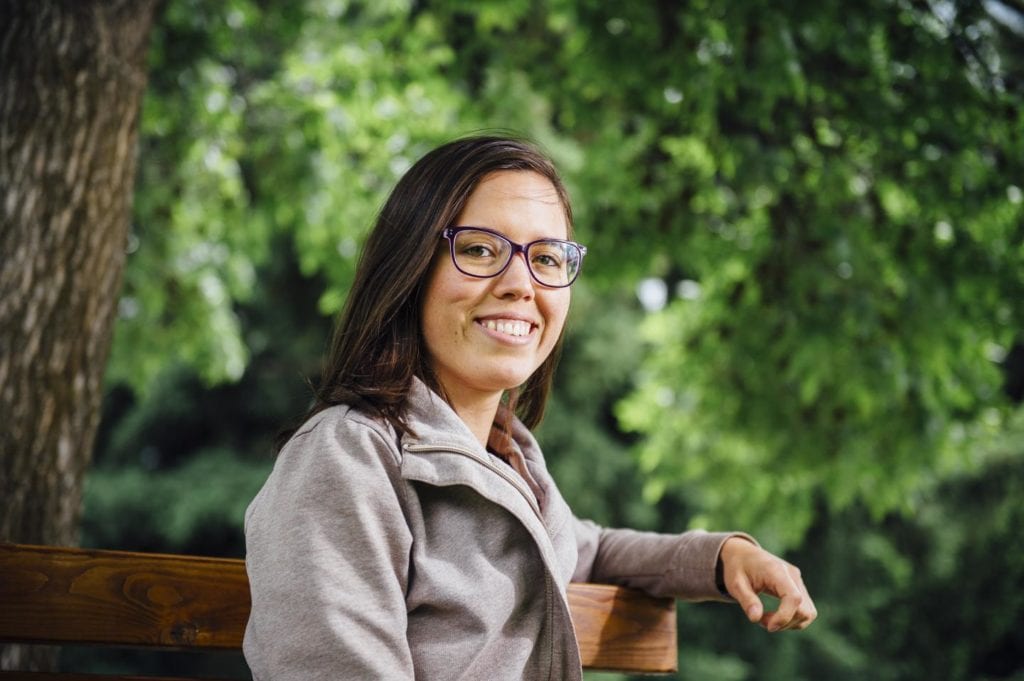 BOZEMAN — A Montana State University doctoral student who is working on a way to improve a neuroscience tool that uses fluorescent proteins found in some jellyfish and coral has received a grant that will help fund her work.

The National Institute of Neurological Disorders and Stroke awarded a three-year F31 fellowship grant to Rosana Molina, a doctoral candidate in the Department of Cell Biology and Neuroscience in MSU’s College of Letters and Science. The grant provides Molina with a stipend and tuition assistance while she continues researching a way to increase the brightness of fluorescent proteins that neuroscientists use in small model organisms to study the brain.

The research is part of the BRAIN Initiative, a prestigious multinational effort to invent next-generation technology to understand how the brain works and, ultimately, prevent and treat disease.

“If you’ve ever seen the fish display in stores where there is an ultraviolet light and the fish glow, what you’re seeing are those fluorescent proteins that are expressed,” said Molina, who earned dual bachelor’s degrees at MSU — one in cell biology and neuroscience, and another in biological sciences.

Molina explained that when a molecule in the fluorescent protein absorbs a photon, or particle of light, it becomes “excited.” Then, as the molecule leaves its excited state and “relaxes,” it emits the photon, which causes the molecule to glow under ultraviolet light. Researchers can then mark specific cells with these glowing proteins. The fluorescent proteins can also be incorporated into sensors to watch the activity of neurons, which twinkle like stars as the brain works.

What makes two-photon excitation special and useful for neuroscience is that near-infrared light travels through tissue better than green light, Molina said, using a common childhood trick of holding a flashlight against the hand as an example.

“If you hold a flashlight on your hand, you’ll see mostly red because the red light goes through tissue more easily,” she said. “That’s because the longer wavelengths are the ones that actually go through the skin. The other wavelengths mostly get absorbed.

“To get efficient two-photon excitation, you need to use a laser,” Molina added. “Basically, my research involves lasers and glowing proteins. It’s a lot of fun.”

Molina was born in Montana, but her family moved to Minnesota where she spent most of her growing-up years. She said she first became interested in science when she learned about genetics in a high school biology class and became fascinated by how family traits — like hair and eye color — were passed on.

First considering the idea of becoming a middle-school science teacher, Molina enrolled at a Minnesota college, but soon found she was drawn more to science than to teaching. When her family moved to Livingston in 2012, Molina, who was then a junior, decided to enroll at MSU after taking a gap year, although she wasn’t sure what academic path to pursue.

“Then I remembered how much I loved science and, when I saw cell biology and neuroscience as an option, I thought, ‘That’s what I want to do,'” she said. “I didn’t know that it was possible to work in a lab as an undergraduate until someone told me about the Howard Hughes Undergraduate Biology program, so that was the first time I started in a lab, in summer 2014.

“That’s one of the greatest things about MSU — getting to work in a lab as an undergrad,” she said.

Molina was then accepted into the Hughes Scholar program, which supports active research and outreach by undergraduate students in the biomedical/bioscience fields during the academic year.

She currently conducts her research in the lab of Thomas Hughes, professor in the Department of Cell Biology and Neuroscience, who she said has been instrumental in her success.

“My adviser, Thom Hughes, has been so supportive to help me get where I am,” Molina said, adding that it was Hughes who encouraged her to apply for the grant.

“Another great thing about this lab is that I’ve been able to go to a lot of conferences to present my research, — four in the last year –and the most recent one was an NIH BRAIN Initiative conference,” she said.

After earning her doctorate, Molina said she would like to become a professor and run her own lab “to develop new tools for neuroscience that are currently unimaginable.”

“Rosana is an outstanding student, collaborating actively with the best neuroscientists around the world, publishing important papers, and exemplifying how diligent and bright our Montana State University students are at conducting research,” Hughes said.

Is early physical therapy associated with less opioid use in patients with musculoskeletal pain?

Jeffrey Gordon wins the Frontiers of Knowledge Award for pioneering…