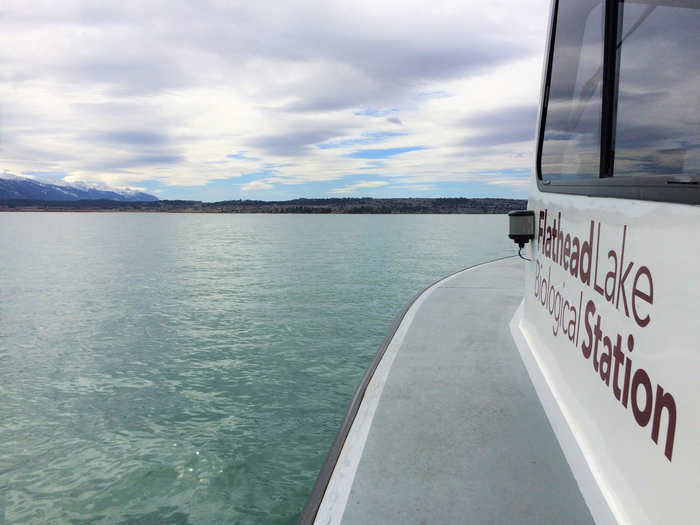 Nitrogen and phosphorus also play a powerful role in lakes and can alter the clear and pristine waters of low-nutrient lakes. But while considerable efforts have been made to monitor the amounts of each nutrient element separately, limited research has assessed how the ratio of nitrogen to phosphorus being supplied to lakes might also alter algae growth and water quality in consequential ways.

Now a team of researchers led by scientists from the University of Montana’s Flathead Lake Biological Station has examined nearly 40 years of nutrient dynamics in Flathead Lake.  This unique dataset, assembled by the FLBS Flathead Monitoring Program, documents a sustained imbalance between nitrogen and phosphorus that likely has significant ecological consequences in Flathead Lake, as well as other low-nutrient ecosystems.

Their work was published July 11 by the Proceedings of the National Academy of Sciences.

“Since the early 1990s, I’ve worked to better understand when and where nitrogen and phosphorus limit the growth of lake organisms, such as plankton,” said FLBS Director Jim Elser, a member of the National Academy of Sciences and the lead author on the study. “It turns out that strong imbalances in the ratio between nitrogen and phosphorus in ecosystems and organisms can have big impacts. I wanted to see if this was going on in Flathead Lake.”

For over a century, research and monitoring programs at FLBS have served as the first line of defense against ever-looming threats to the renowned water quality of the Flathead watershed. The primary threats of nutrient pollution and invasive species have remained the bio station’s oldest foes in the fight to sustain the lake’s condition and excellent water quality.

Flathead Lake is known for its clean and clear water, largely because the geology encompassing its watershed is ancient and low in nutrients, especially the nutrient phosphorus. This means there are very low levels of nutrients that can be weathered from the bedrock to reach the lake through rainstorms and snowmelt. Therefore, naturally there are low levels of nutrients available for lake algae to grow, and Flathead Lake remains clear and blue instead of green and murky.

This low background of naturally supplied nutrients makes Flathead Lake very sensitive to human-driven inputs of nutrients. Such human-driven inputs of nutrients into Flathead Lake and associated algal blooms raised concerns in the 1970s and ’80s. Subsequently, research conducted by FLBS scientists led to nutrient reduction measures in the Flathead watershed, including one of the nation’s largest bans on phosphorus-containing laundry detergents and a multimillion-dollar overhaul of local wastewater treatment facilities to remove phosphorus to very low levels.

But in recent years, Elser and his colleagues began to wonder if monitoring nitrogen and phosphorus in isolation was enough. Given his long history in developing and testing the theory of ecological stoichiometry – the study of the balance of multiple chemical elements in ecological interactions – Elser was eager to find out.

“We found that the overall levels of nitrogen and phosphorus in Flathead Lake and its surrounding rivers and streams, while variable within years and year-to-year, are low but not increasing,” said Elser. “In fact, nitrogen and phosphorus levels coming into Flathead Lake from its larger rivers actually appear to be slowly declining. This is great news for the water quality and clarity in our beloved Flathead Lake, while water quality in many of the world’s lakes is declining due to increasing nutrient inputs.”

Then came a surprising development. While the overall levels of nitrogen and phosphorus in Flathead Lake weren’t increasing, the researchers discovered that the lake has sustained a high ratio of nitrogen to phosphorus across a span of four decades, often reaching values that greatly exceed the normal nitrogen-to-phosphorus recipe that matches the needs of most phytoplankton, the lake’s microscopic floating algae.

To put it another way, just as humans benefit from a well-balanced breakfast or farmers apply a fertilizer with the appropriate ratio of nitrogen to phosphorus for specific crops, microorganisms that make up the foundation of a lake’s food web depend on a very specific ratio of nutrients. When the ratio between nitrogen and phosphorus is high, as it is in Flathead Lake, plankton growth is likely limited by lack of available phosphorus for much of the year.

Through a series of experiments, the team of researchers showed that Flathead Lake phytoplankton are phosphorus-limited. This means the algae are forced to build cells that have low content of phosphorus, making them not particularly nutritious. For the tiny lake animals, zooplankton, which eat those phytoplankton and thereby sustain the lake’s high transparency, this amounts to the equivalent of a “junk food” diet. As a result the zooplankton also become phosphorus-limited and their abundances low.

Finally, the team showed that the strong nitrogen-to-phosphorus imbalance in Flathead Lake sets the stage for potential production of the greenhouse gas methane. This occurs when phosphorus-hungry microbes start to scavenge phosphorus from organic molecules and produce methane as a byproduct.

These findings have implications not only for Flathead Lake but also for lakes globally. Wastewater treatment systems, agricultural runoff and urban influences are increasingly recognized as contributing to nitrogen-to-phosphorus imbalance in a variety of situations.

“At Flathead Lake, implementation of wastewater treatment processes that more effectively remove nitrogen would help balance the lake’s nitrogen-to-phosphorus ratio,” Elser said. “Regionally, a reduction of the atmospheric transport of nitrogen, which occurs through fossil fuel combustion or volatilization of agricultural fertilizers or animal wastes, would also help reduce nitrogen inputs to the lake.”

When it comes to the building blocks of our lake ecosystems, in other words, nutrient balance matters.

For the complete study, visit the Proceedings of the National Academy website at https://www.pnas.org/eprint/BTJ6FEQZNWYCSCB93R2U/full.