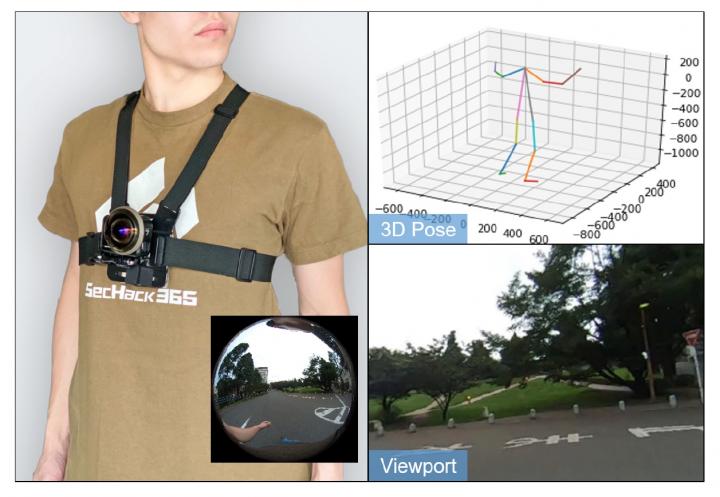 Researchers at Tokyo Institute of Technology (Tokyo Tech) and Carnegie Mellon University have together developed a new human motion capture system that consists of a single ultra-wide fisheye camera mounted on the user’s chest. The simplicity of their system could be conducive to a wide range of applications in the sports, medical and entertainment fields.

Conventional motion capture systems in specially equipped studios typically rely on having several synchronized cameras attached to the ceiling and walls that capture movements by a person wearing a body suit fitted with numerous sensors. Such systems are often very expensive and limited in terms of the space and environment in which the wearer can move.

Now, a team of researchers led by Hideki Koike at Tokyo Tech present a new motion capture system that consists of a single ultra-wide fisheye camera mounted on the user’s chest. Their design not only overcomes the space constraints of existing systems but is also cost-effective.

Already, the researchers have trained these neural networks with an extensive synthetic dataset consisting of 680,000 renderings of people with a range of body shapes, clothing, actions, background and lighting conditions, as well as 16,000 frames of photo-realistic images.

Some challenges remain, however, due to the inevitable domain gap between synthetic and real-world datasets. The researchers plan to keep expanding their dataset with more photo-realistic images to help minimize this gap and improve accuracy.

The researchers envision that the chest-mounted camera could go on to be transformed into an everyday accessory such as a tie clip, brooch or sports gear in future.

The team’s work will be presented at the 33rd ACM Symposium on User Interface Software and Technology (UIST), a leading forum for innovations in human-computer interfaces, to be held virtually on 20-23 October 2020.

Tokyo Tech stands at the forefront of research and higher education as the leading university for science and technology in Japan. Tokyo Tech researchers excel in fields ranging from materials science to biology, computer science, and physics. Founded in 1881, Tokyo Tech hosts over 10,000 undergraduate and graduate students per year, who develop into scientific leaders and some of the most sought-after engineers in industry. Embodying the Japanese philosophy of “monotsukuri,” meaning “technical ingenuity and innovation,” the Tokyo Tech community strives to contribute to society through high-impact research.