The ongoing global monkeypox outbreak is mainly affecting gay, bisexual and other men who have sex with men (MSM) in countries where the virus has previously not been endemic. One approach to control the outbreak could be immunisation against smallpox as available evidence suggests that recent smallpox vaccination confers a high degree of protection and immunity against monkeypox virus [1]. 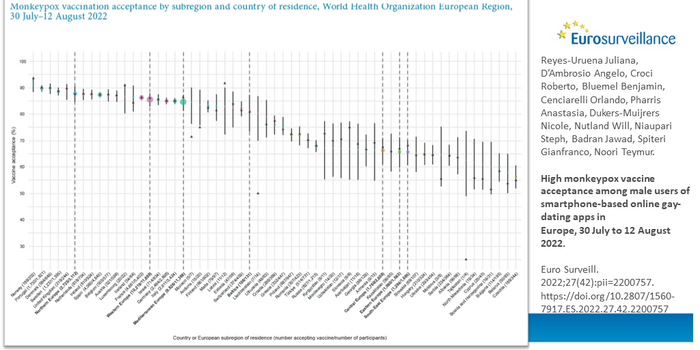 The ongoing global monkeypox outbreak is mainly affecting gay, bisexual and other men who have sex with men (MSM) in countries where the virus has previously not been endemic. One approach to control the outbreak could be immunisation against smallpox as available evidence suggests that recent smallpox vaccination confers a high degree of protection and immunity against monkeypox virus [1].

This approach, however, requires that those at (highest) risk of infection are willing to be vaccinated. Reyes-Urueña et al. conducted an online survey among adult users (≥ 18 years of age) of smartphone-based online gay-dating apps in the World Health Organization’s European Region to assess monkeypox vaccination acceptance levels in this group. The survey was advertised on the apps Grindr and Hornet via pop-up or inbox messages and by community-based organisations across Europe. Between 30 July and 12 August 2022, 32,902 people answered the survey. Most of the respondents were living in the western and Mediterranean subregions of Europe.

In their article published in Eurosurveillance [2], Reyes-Urueña et al. present a crude vaccination acceptance of 82% (26,980) among the survey respondents: 62% (20,266) would ‘surely accept’ and 20% (6,714) would ‘probably accept’ it. The willingness to receive the smallpox vaccine strongly increased with several factors such as personal perception about the severity of monkeypox and transmission risk as well as already being linked to healthcare. Those app users who knew someone with monkeypox were also more willing to get vaccinated. Around 9% of the survey participants were hesitant about the vaccination and another 8% report that they would refuse to get vaccinated.

Acceptance to vaccinate influenced by perception about severity of monkeypox
The authors saw a distinct geographical difference across the Region among those with a positive attitude towards smallpox vaccination against monkeypox in contrast to those with a lower immunisation acceptance. Respondents from northern and western Europe indicated a higher acceptance (credible intervals of 85%-90% and 83%-88% respectively) in comparison to app users in the south-east (61%-70%) and east of Europe (60%-71%).

The notion that monkeypox is a ‘severe’ or ‘very severe’ disease (response from 45% of the survey participants) and being (very) worried about getting monkeypox, was strongly associated with the willingness to receive the smallpox vaccine.

In addition, Reyes-Urueña et al. note that an active link to healthcare e.g. due to HIV treatment or HIV pre-exposure prophylaxis (PrEP), was associated with the positive attitude towards smallpox vaccination (89% of HIV positive respondents and 92% among PrEP users).

Vaccination as part of a combined prevention approach
The authors note that their survey represents a convenience sample of MSM using smartphone-based online dating apps in Europe who chose to participate in a survey about monkeypox and that users of the apps might have higher risk behaviours compared with those not using dating apps. As a result, “people at self-perceived higher risk for the disease may be more prone to getting vaccinated against it which could lead to overestimates in vaccine acceptance”.

[3] Monkeypox (MPX) is a zoonotic disease, i.e. it can be transmitted between animals and humans via direct or indirect contacts. Following the eradication and of smallpox and the end of universal smallpox vaccination, MPX is currently the most prevalent orthopoxvirus infection in humans. See more on the website of the European Centre for Disease Prevention and Control: https://www.ecdc.europa.eu/en/monkeypox