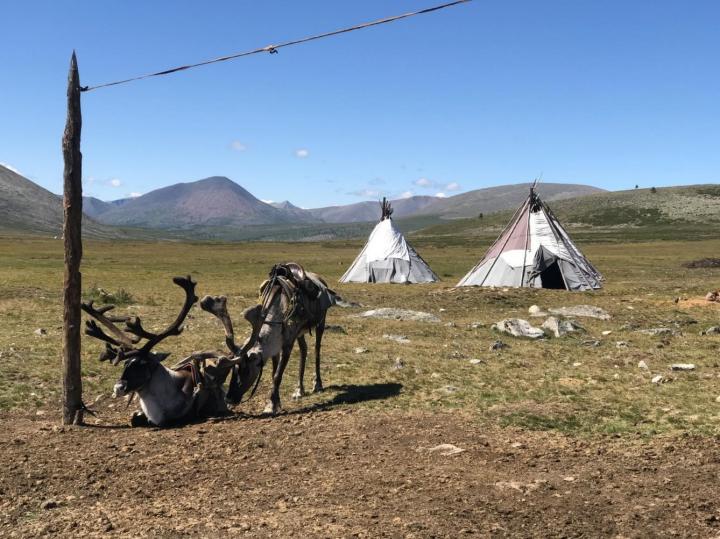 Mongolia hosts one of the world’s most dynamic animal-based economies, including the world’s lowest latitude population of domestic reindeer herders, the Tsaatan people, who live in the high tundra (in Mongolian, taiga) along the Russian border in the country’s Khuvsgul province. While there is reason to suspect that reindeer herding and utilization of the area’s rich wildlife resources played an important role in the region’s history and prehistory, the area’s harsh climate and active geology mean that very few archaeological materials have survived to the present day. In the current study, an international team of researchers present new evidence of historic tool production and wild resource use, indicating that ice patches are likely to contain one of the few material records of premodern reindeer domestication in Mongolia and lower Central Asia.

“These accumulations of ice and snow freeze objects that have fallen inside, preserving them to create one of our only archaeological datasets from this key region,” says lead author, William Taylor of the Max Planck Institute for the Science of Human History and the University of Colorado-Boulder. Conducting the first such work of its kind in the region, Taylor and his colleagues reported finding a number of wooden artifacts, including an object identified by local people as a willow fishing pole.

These objects preserve important information about traditional technologies, and suggest that future work may help answer persistent questions, such as when domestic reindeer were first introduced. Some of the objects found by the team were scientifically dated to the mid-20th century, indicating that summer ice melt is melting to levels that haven’t been seen in half a century or more.

Unfortunately, even as the melting ice shares its first clues into the past, it also poses a grave danger to modern reindeer herders. Reindeer rely on snow and ice to regulate heat and to escape disease-carrying insects. Melting snow also provides important sources of water for both people and animals. As the ice melts, sometimes for the very first time, the warming climate undercuts the viability of reindeer herding, and appears to be permanently influencing the fragile ecology of northern Mongolia’s tundra zones.

“Access to ice patches has been critical for the health and welfare of these animals in so many ways,” says Jocelyn Whitworth, a veterinary researcher and study co-author. “Losing the ice compromises reindeer health and hygiene and leaves them more exposed to disease, and impacts the well-being of the people who depend on the reindeer.”

Going forward, global warming appears to pose a powerful threat, both to Mongolia’s modern herders and to its archaeological cultural heritage. Dr. Julia Clark, the project’s co-director, is especially worried. “Archaeology is non-renewable,” she says. “Once the ice has melted and these artifacts are gone, we can never get them back. ” The team has redoubled their efforts for the coming year, in the hopes of saving these rare, well-preserved items, and using them to understand the origins of Mongolia’s unique pastoral way of life.

Assistant Professor and Curator of Archaeology

Max Planck Institute for the Science of Human History