A drug carrier able to reach the brain, bind to an aggressive type of tumor called glioblastoma multiforme, and release a chemotherapeutic agent has been tested for the first time by Brazilian researchers. According to an article published in the International Journal of Pharmaceutics, the potential treatment was shown to be effective in isolated cells and animal models thanks to a combination of nanotechnology, chemotherapy and a monoclonal antibody. 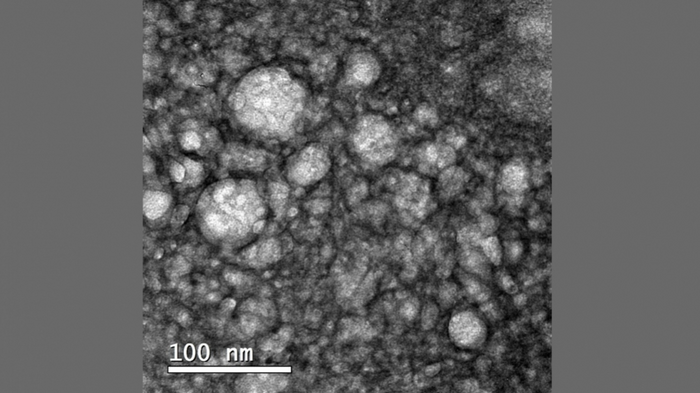 A drug carrier able to reach the brain, bind to an aggressive type of tumor called glioblastoma multiforme, and release a chemotherapeutic agent has been tested for the first time by Brazilian researchers. According to an article published in the International Journal of Pharmaceutics, the potential treatment was shown to be effective in isolated cells and animal models thanks to a combination of nanotechnology, chemotherapy and a monoclonal antibody.

Glioblastoma multiforme accounts for 60% of all brain tumors in adults and is also the most aggressive type of brain cancer. Even after surgery, radiation therapy and conventional chemotherapy, patient survival averages about 14 months. One of the reasons is angiogenesis, a process whereby the tumor quickly creates its own blood vessels in order to develop.

“Another difficulty is the blood-brain barrier, which prevents drugs from reaching the tumor,” said Leonardo Di Filippo, a doctoral candidate and researcher at São Paulo State University’s School of Pharmaceutical Sciences in Araraquara (FCFAr-UNESP).

To address these challenges, Di Filippo worked with fellow researchers at UNESP and two other Brazilian institutions, the University of Campinas (UNICAMP) and the University of São Paulo (USP) at Ribeirão Preto, to combine docetaxel, a powerful chemotherapy drug, with a nanostructured lipid carrier designed to cross the blood-brain barrier. “We developed a formulation in which the substances were combined in a stable manner,” he said.

The researchers also coupled the carrier to bevacizumab, a monoclonal antibody developed against vascular endothelial growth factor (VEGF) and approved for other uses. “VEGF is the cancer protein that stimulates angiogenesis and tends to be overexpressed in glioblastoma multiforme,” Di Filippo explained. The goal was to create a formulation capable of penetrating the brain and releasing a chemotherapy drug to destroy the tumor.

“Development of this system with this application is an innovation,” said Marlus Chorili, a professor at UNESP and principal investigator for the project, which was supported by FAPESP.

Having created the nanostructured lipid carrier with docetaxel and bevacizumab, the researchers set out to make sure it met certain basic criteria. Laboratory tests showed its size to be 128 nanometers, small enough to overcome the blood-brain barrier. In addition, docetaxel entrapment was 90% and bevacizumab coupling efficiency was 62%. “Those are positive numbers, sufficient to guarantee adequate therapeutic concentrations,” Di Filippo said.

The next step was an assessment of the compound’s effects on two glioblastoma cell lines and healthy cells. The nanocarrier eliminated five times more cancer cells than docetaxel on its own without affecting healthy cells. It was particularly effective against U87MG, a glioblastoma cell that overexpresses VEGF, but less so against A172, which expresses relatively little VEGF. “These findings show that our nanocarrier selectively attacks cells that express a lot of VEGF,” Di Filippo said.

The researchers also found that the potential medication was able to enter cancer cells and release docetaxel continuously for about 84 hours, suggesting prolonged availability of the chemotherapy drug in the organism.

The researchers also found that the formulation did not cause any deterioration in levels of biomarkers such as albumin and creatinine compared with the use of docetaxel on its own. “This shows that toxicity was not intensified,” Di Filippo explained.

According to Chorilli, the results were positive but these were the first experiments with the nanostructured lipid carrier for this specific application. “We need to conduct more studies using isolated cells and animals. If the results against glioblastoma multiforme remain good, we could try to find partners for clinical trials with human volunteers,” he said.

The study reported in the article highlighted the potential of lipid nanocarriers in treating brain cancer, he added: “We can use different combinations with other monoclonal antibodies and chemotherapy drugs against other types of cancer. Many more years will undoubtedly be required to complete this research.”

Chorilli is studying similar methods for the treatment of infections, such as gastritis and other diseases caused by the bacterium Helicobacter pylori, in research also supported by FAPESP.