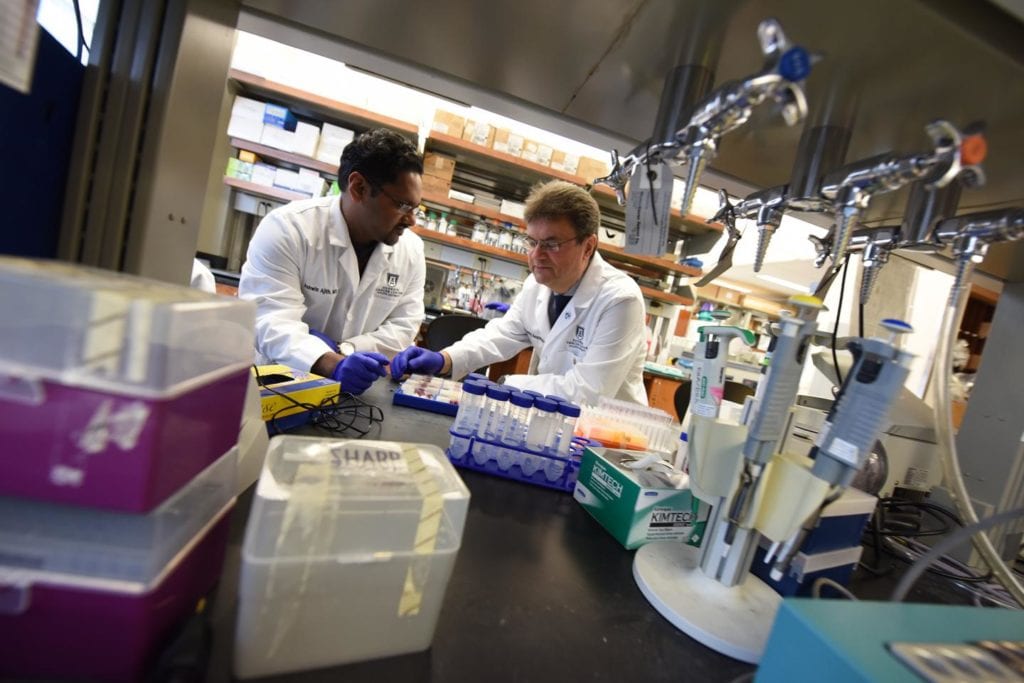 AUGUSTA, Ga. (Feb. 5, 2019) – A powerful immune molecule helps protect transplanted organs from rejection by putting a silencer on two other immune molecules that converge to take a direct shot at the organ, scientists report.

While the HLA-G gene is largely silent in most of us, it’s known to play a role in enabling a fetus, which has genetic material from both parents, to avoid being targeted by the mother’s immune system. HLA-G dimer, a combination of two of the HLA-G molecules, is the most powerful HLA-G, says Horuzsko, corresponding author of the study in The FASEB Journal.

When foreign material, like a tumor or donor organ or fetus, show up, it naturally gets the attention of cytotoxic T cells, or killer T cells, which as their name implies, move in to help eliminate the invader. A primary way they kill is by inducing the molecules granzymes and perforin. These effector molecules work together to both cause cells of the transplanted organ to self-destruct and to produce inflammation that can wreak further destruction.

Horuzsko uses the gun barrel and bullet analogy to describe the molecules’ roles: perforin forms a channel aimed at the target cell and granzyme B makes the powerful bullet that shoots through it. He notes that some people with insufficient immune systems can have, for example, the bullet without the barrel. Resulting dead cells trigger inflammation and granzymes directly trigger even more inflammation that hurts the organ.

Up to 15 percent of patients with a kidney transplant, for example, will experience this cytotoxic T cell attack within five years despite best efforts to match donors and recipients, and drugs that generally suppress the immune response.

Horuzsko and his colleagues have found that at least part of how HLA-G dimer protects in this scenario is by directly quietening these big immune guns and the killer ability of the cytotoxic T cells that produce them.

They were able to see HLA-G dimer’s impact by measuring the plasma level of 40 patients who had rejected their donated organs and 90 who had not. They found significantly higher HLA-G dimer levels in patients who did well with no clear demographic picture, like age or race, of who would have a naturally higher level.

A genetic analysis confirmed HLA-G dimer directly down-regulated expression of the granzyme B gene. Activation of the killer T cells and granzyme B by HLA-G dimer were significantly inhibited in a transgenic mouse they developed that expresses human LILRB1, which is considered the primary receptor for HLA-G.

In a dish, when they activated the cytotoxic T-cells of healthy individuals with a lectin known to get the attention of the immune system, nearly half the resulting killer cells were positive for granzyme B. When they pretreated blood cells of healthy volunteers with HLAG dimer, they saw downregulation of granzyme B as well, and that the killer T cells present were less capable of their classic, targeted kills. In fact, they found an increased number of HLA-G dimer receptors on those killer cells.

That meant the barrel and bullet aimed at the new organ didn’t happen per their usual and that the scientists appeared to be correct about how HLA-G dimer was protective.

To take steps back closer to patients, they created a “humanized” mouse, a living model of a human transplant with the immune system of one person being given cells from another. “It provides an environment that is much closer to what we see in a patient,” Horuzsko says of this humanized mouse.

They found that, much like with patients with naturally high levels, giving HLA-G dimer interfered with the attack instincts of the killer T cells. “It’s more evidence this mechanism is working in a real situation,” Horuzsko says.

In the case of a less-than-ideal transplant match, white blood cells, early signs of an immune response, can show up even as the new organ is being put into the patient in the operating room, he says. However, more typically it happens over the course of about a week as the recipient’s immune system naturally produces what Horuzsko calls an “orchestra” of immune cells, with the cytotoxic T cells the most powerful players, he says. “It’s a very dynamic

One day the humanized model could also be used as an additional test for compatibility of donor and recipient, Horuzsko says, even to determine how many and which drugs would work best in an individual patient.

“We are talking about a living test of organ compatibility. This is the future of personalized medicine,” Horuzsko says, noting that higher HLA-G dimer levels and less response to the donor organ would translate to less medicine and better outcomes.

Current therapies to help avoid organ rejection include optimizing the recipient-donor match then giving drugs that generally suppress the immune response, which can leave patients vulnerable to infections and cancer.

He adds that the dimer, while powerful, is oddly vulnerable in that it can easily break apart. “We need to generate a stable, unbreakable HLA-G dimer,” he says of ongoing work that must be completed before moves are made toward clinical trials.

While naturally high levels of HLA-G don’t increase your risk of getting cancer, they do reduce your immune system’s ability to fight it when you do get it, Horuzsko says. Interestingly, small tumors don’t seem to interest HLA-G dimer.

After a kidney transplant, HLA-G levels go up some in most of us, not necessarily to protect the new organ, rather likely as a natural balance to the immune response which logically ramps up in response to the presence of somebody else’s organ, he says.

Like HLA-G, granzyme B is normally present in our body, but also quiet, unless it needs to kill the flu virus you pick up from a doorknob or some bacteria on a sandwich, he says. HLA studies already are done to help identify a good organ donor match.

Study coauthors Dr. Laura Mulloy, chief of the MCG Division of Nephrology in the Department of Medicine, and MCG nephrologists Drs. Carlos Zayas and Rajan Kapoor, managed the clinical research for the study.

The research was funded by the Carlos and Marguerite Mason Trust and the National Cancer Institute.

Gaining a clear picture of land degradation and soil erosion

Saturn’s moon Mimas, a snowplough in the planet’s rings