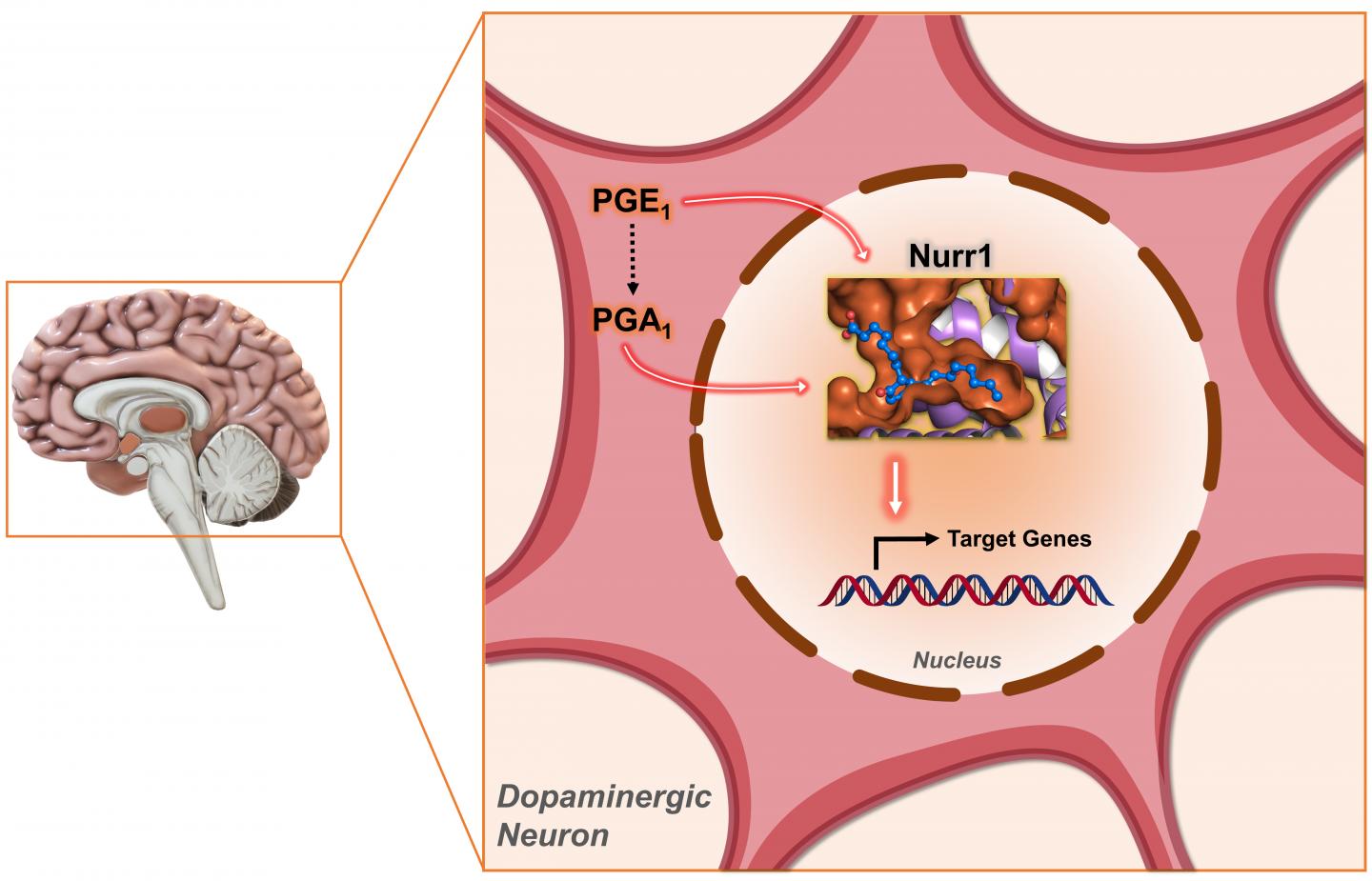 A promising molecular pair has offered hope that could lead to the development of a new treatment to slow down Parkinson’s disease, a study by Nanyang Technological University, Singapore (NTU Singapore) and Harvard University has found.

Parkinson’s disease is the second most common neurodegenerative disorder after Alzheimer’s disease, affecting 7 to 10 million people worldwide. Patients with the illness have reduced levels of dopamine in the brain, causing them to have difficulty controlling motor movements, with symptoms such as tremor and rigidity of muscles in hands, arms, and legs. They can also develop some non-motor symptoms, like sleep disturbance, depression, and loss of smell.

Through laboratory investigations and in vivo experiments, the team led by Professor Yoon Ho Sup from the NTU School of Biological Sciences and Professor Kwang-Soo Kim from McLean Hospital and Harvard Medical School in the United States found that the ‘molecular pair’, Prostaglandin E1 (PGE1) – a type of hormone – and Prostaglandin A1 (PGA1), can be the key to boosting dopamine levels and slowing Parkinson’s disease.

PGE1 and PGA1 do so by binding to Nurr1, a class of proteins crucial to the development and maintenance of dopamine in the brain.

Their binding causes Nurr1 to be activated, resulting in a marked increase in dopamine production while preventing dopamine-producing brain cells from dying. After activating Nurr1, the mice with Parkinson’s disease showed significant improvements in their motor functions.

Although much research still needs to be done, these findings could provide a new avenue for the creation of Nurr1-activating drugs to combat Parkinson’s disease – an illness with no cure currently. While there are already treatment methods like dopamine-raising medication or deep brain stimulation using electric currents, these treatments have side-effects and can only address the patient’s symptoms, not slow down, or halt the disease.

Prof Yoon said, “Considering the essential function of Nurr1, we have been searching for its activating molecules in the body. Finally, we have successfully identified that PGE1/PGA1 is the molecular pair that acts specifically on Nurr1 and can lead to neuroprotective effects on the brain.”

“Given that all candidate Parkinson’s drugs have failed to show neuroprotective abilities in clinical trials, our findings may offer an opportunity to design mechanism-based disease-modifying therapeutics to treat Parkinson’s disease with little side effect.”

The findings were published in the peer-reviewed journal Nature Chemical Biology in May 2020, and were made by researchers from Singapore, the United States, and South Korea.

One of a number of hormone-like substances in the body, Prostaglandins are responsible for a wide range of body functions such as the contraction and relaxation of smooth muscle, the dilation and constriction of blood vessels, control of blood pressure, and modulation of inflammation.

Their regulatory roles in activating the dopamine function of Nurr1 have not been studied until now.

To identify and characterise how PGE1/PGA1 activates Nurr1, the team of researchers used nuclear magnetic resonance and X-ray crystallography to decipher the structures of the molecules involved, successfully unveiling details of how PGA1 binding leads to the activation of Nurr1 for the first time.

These findings from experiments on cells were then supported by in vivo experiments with experimentally induced Parkinson’s disease, which showed significant improvements in their motor functions when PGE1 and PGA1 were administered.

Prof Kim said, “By uncovering the molecular interactions, we gain insights into the biological function and regulation of Nurr1 in health and disease such as Parkinson’s disease. Our findings in this study are adding to what we know about how dopamine neurons function and point towards the development of novel therapeutics of Parkinson’s disease.”

Highlighting the significance of the findings, co-author Professor Lim Kah Leong, Vice Dean (Research) of NTU Lee Kong Chian School of Medicine said, “PGA1 is not a new kid on the block, but a molecule known to exhibit anti-inflammation and anti-tumour properties. Prostaglandins like PGE1 are available for clinical use, for example in obstetrics cases. This means that the compound can potentially be re-positioned to treat Parkinson’s patients, which can accelerate the time needed to take an experimental drug to the clinic.”

The scientists are now looking to design a synthetic form of PGE1/PGA1 and to validate it as a potential new drug that can target Nurr1, thereby halting or reversing the onset of Parkinson’s disease.