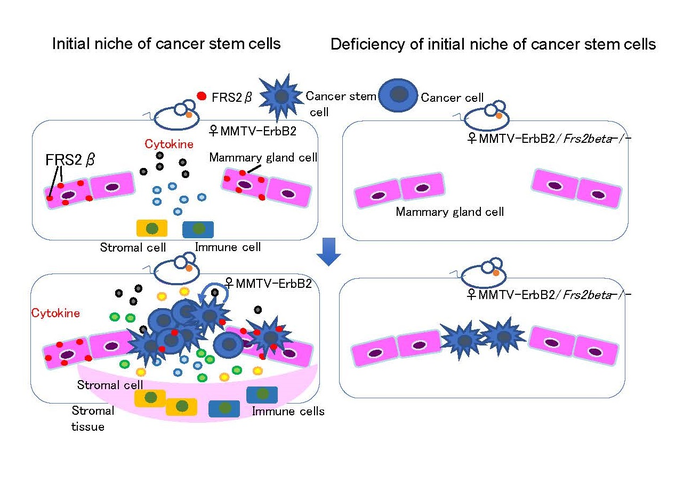 Cancer onset prevention is considered to be the most important and cost-effective long-term measure for cancer prevention. However, since the molecular mechanisms by which premalignant lesions and very early cancers begin to proliferate remains unknown in many cases, preventive methods for cancer onset based on the underlying mechanisms have not yet been developed.

The present study was performed by a research team led by Prof. Gotoh of Kanazawa University together with scientists from Tokyo Medical University, the University of Tokyo, National Cancer Center Japan, Kyushu University, Keio University and so on. While investigating details of the microenvironment surrounding breast cancer cells, the team found that the intracellular signaling molecule FRS2β*1) is expressed in a very small subset of epithelial cells in the mammary gland.

At present, early lesions of breast cancer, Ductal carcinoma in situ (DCIS)*2), can be found by mammography. However, since one cannot tell whether the cancer cells in DCIS will subsequently proliferate and become malignant invasive cancer, the only option is surgery, which is a highly invasive treatment method, causing a problem in clinical practice. By knowing the potency of FRS2β–NF-κB axis activity in the microenvironment surrounding DCIS, it may be possible to determine the need for surgery.

It is thought that further development of the present study will enable treatments that target the mammary microenvironment that is created before breast cancer onset. Consequently, prevention of breast cancer onset and early treatment could be realized and lives could be saved.

A membrane-bound intracellular adapter protein molecule. It was known that this protein binds to the receptor tyrosine kinase HER2/ErbB2 and suppresses the intracellular serine/threonine kinase ERK, but most of its functions were unknown.

The earliest lesion of breast cancer. This is a lesion in which cancer cells are localized in the milk duct without destroying and invading the basement membrane outside the mammary gland cells that surround the duct.