Researchers from the Institute of Tibetan Plateau Research (ITP) of the Chinese Academy of Sciences have investigated how climate influences the amount of electricity used in Tibetan homes based on machine learning. 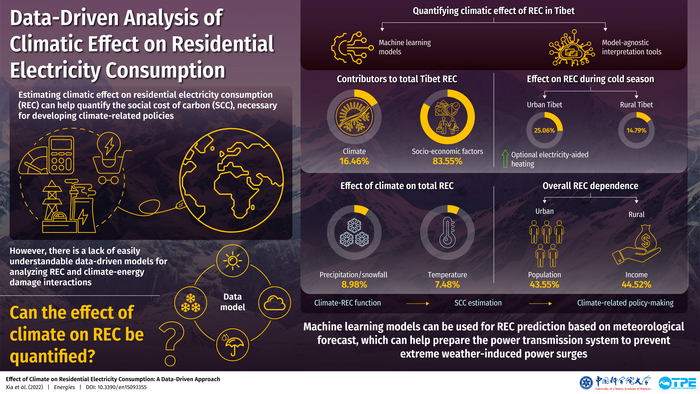 Researchers from the Institute of Tibetan Plateau Research (ITP) of the Chinese Academy of Sciences have investigated how climate influences the amount of electricity used in Tibetan homes based on machine learning.

Using an innovative approach, they made their machine learning models interpretable, thus revealing the importance of precipitation and urbanization when analyzing the relationship between energy consumption and climate.

The study was published in Energies on May 5.

Amidst global warming, reducing the emission of greenhouse gases is a priority. Since most electricity we consume is still produced from coal and fossil fuels, one way to reduce our carbon footprint is to keep an eye on the power we use at home—our residential energy consumption (REC).

In most places, the largest contributors to REC are heating and cooling. Thus, one could reasonably infer that REC is strongly related to a region’s temperature. Such an assumption is the basis for many mathematical models seeking to explain the relationship between temperature and REC. However, the truth seems to be more complex and many additional factors must be considered to produce better models.

“Previous studies warned us that global warming will increase REC during summer because higher temperature drives up cooling demand. However, many climate-related power outages in recent years happened in winter during strong snowfall events. This made us curious about the role of precipitation in shaping REC,” said XIA Cuihui from ITP, lead author of the study.

XIA and her colleagues took an innovative approach to understanding how different climate-related factors can affect REC in Tibet, a cold alpine region with distinct rural and urban areas. The researchers decided to leverage machine learning and available REC and climate data from Tibet to train multiple models and compare their performance.

In general, machine learning models, after being trained with real-world data, act as “black boxes.” They have good predictive accuracy without making any assumptions beforehand. However, it is difficult to understand how the input factors (e.g., temperature, precipitation, income and population) are individually weighted by the system to predict the outcome (REC).

This low interpretability is a huge drawback. To tackle this limitation, the researchers used the latest techniques from the interpretable machine learning community to peek inside these “black boxes.”

This approach led to some interesting findings. The results show that precipitation during the cold season is a major contributor to Tibet’s REC. This was especially true when temperatures fell below freezing, thus producing snowfall instead of rain.

“Our study highlights that climate-related energy studies should treat climate as a whole rather than focusing on temperature alone, particularly for studies concerning cold winters and extreme weather such as blizzards,” said XIA.

Another important finding was the marked disparity between urban and rural areas in how climate affects REC. For example, urban areas, on cold, snowy days, were more likely than less-wealthy rural areas to have higher REC. This result shows another advantage of the data-driven approach used by XIA’s team: They were able to compare urban and rural areas while considering socioeconomic factors.

Besides helping us understand the complex climate-energy consumption relationship better, this type of predictive model is useful in developing early warning systems that guard against power outages caused by extreme weather. Since Tibet and its surrounding areas are becoming warmer and wetter due to climate change, the insights from such interpretable models can also help guide energy-related policymaking in the future.

Effect of Climate on Residential Electricity Consumption: A Data-Driven Approach