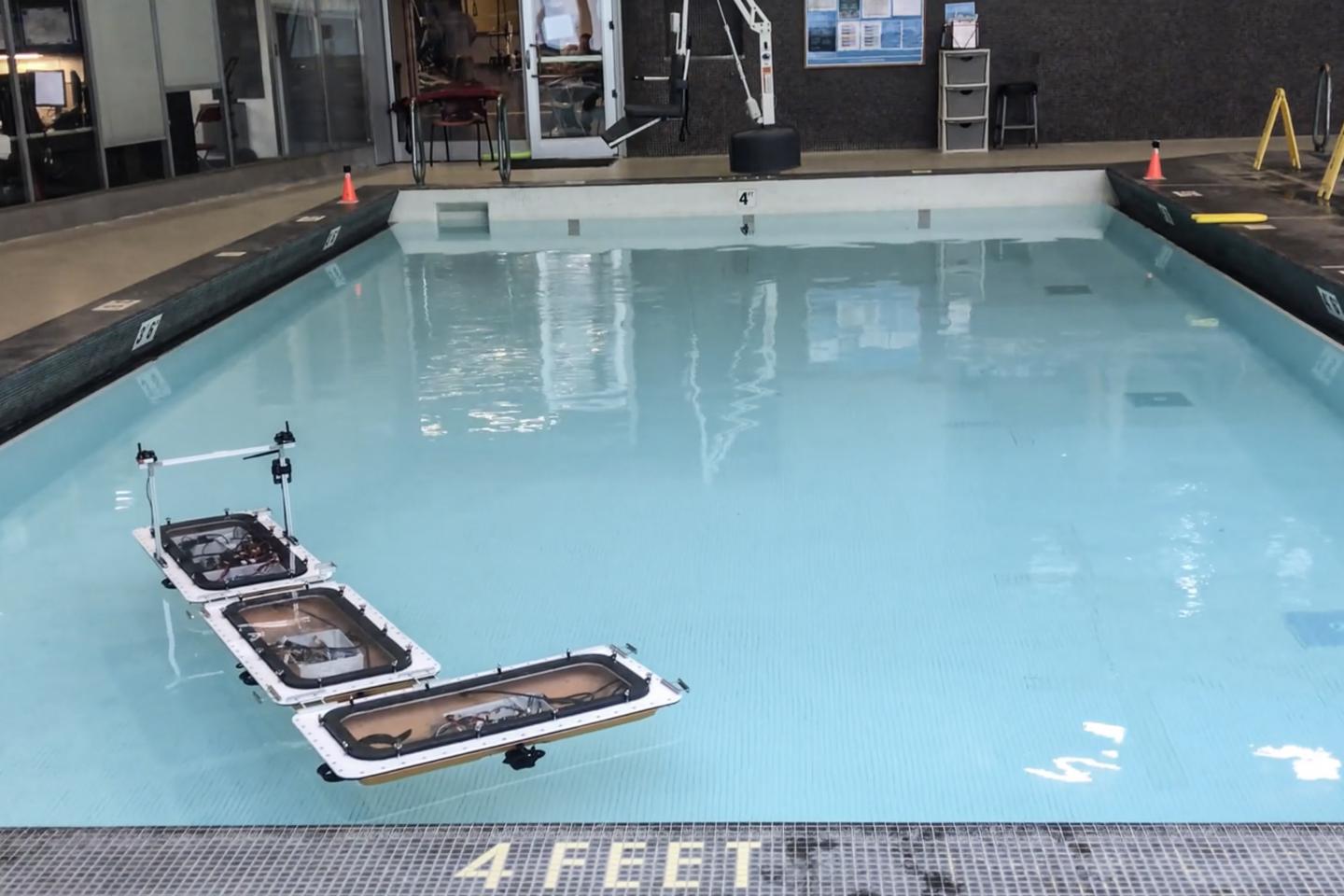 Credit: Courtesy of the researchers/MIT

MIT’s fleet of robotic boats has been updated with new capabilities to “shapeshift,” by autonomously disconnecting and reassembling into a variety of configurations, to form floating structures in Amsterdam’s many canals.

The autonomous boats — rectangular hulls equipped with sensors, thrusters, microcontrollers, GPS modules, cameras, and other hardware — are being developed as part of the ongoing “Roboat” project between MIT and the Amsterdam Institute for Advanced Metropolitan Solutions (AMS Institute). The project is led by MIT professors Carlo Ratti, Daniela Rus, Dennis Frenchman, and Andrew Whittle. In the future, Amsterdam wants the roboats to cruise its 165 winding canals, transporting goods and people, collecting trash, or self-assembling into “pop-up” platforms — such as bridges and stages — to help relieve congestion on the city’s busy streets.

In 2016, MIT researchers tested a roboat prototype that could move forward, backward, and laterally along a preprogrammed path in the canals. Last year, researchers designed low-cost, 3-D-printed, one-quarter scale versions of the boats, which were more efficient and agile, and came equipped with advanced trajectory-tracking algorithms. In June, they created an autonomous latching mechanism that let the boats target and clasp onto each other, and keep trying if they fail.

In a new paper presented at the last week’s IEEE International Symposium on Multi-Robot and Multi-Agent Systems, the researchers describe an algorithm that enables the roboats to smoothly reshape themselves as efficiently as possible. The algorithm handles all the planning and tracking that enables groups of roboat units to unlatch from one another in one set configuration, travel a collision-free path, and reattach to their appropriate spot on the new set configuration.

In demonstrations in an MIT pool and in computer simulations, groups of linked roboat units rearranged themselves from straight lines or squares into other configurations, such as rectangles and “L” shapes. The experimental transformations only took a few minutes. More complex shapeshifts may take longer, depending on the number of moving units — which could be dozens — and differences between the two shapes.

“We’ve enabled the roboats to now make and break connections with other roboats, with hopes of moving activities on the streets of Amsterdam to the water,” says Rus, director of the Computer Science and Artificial Intelligence Laboratory (CSAIL) and the Andrew and Erna Viterbi Professor of Electrical Engineering and Computer Science. “A set of boats can come together to form linear shapes as pop-up bridges, if we need to send materials or people from one side of a canal to the other. Or, we can create pop-up wider platforms for flower or food markets.”

For their work, the researchers had to tackle challenges with autonomous planning, tracking, and connecting groups of roboat units. Giving each unit unique capabilities to, for instance, locate each other, agree on how to break apart and reform, and then move around freely, would require complex communication and control techniques that could make movement inefficient and slow.

To enable smoother operations, the researchers developed two types of units: coordinators and workers. One or more workers connect to one coordinator to form a single entity, called a “connected-vessel platform” (CVP). All coordinator and worker units have four propellers, a wireless-enabled microcontroller, and several automated latching mechanisms and sensing systems that enable them to link together.

Coordinators, however, also come equipped with GPS for navigation, and an inertial measurement unit (IMU), which computes localization, pose, and velocity. Workers only have actuators that help the CVP steer along a path. Each coordinator is aware of and can wirelessly communicate with all connected workers. Structures comprise multiple CVPs, and individual CVPs can latch onto one another to form a larger entity.

During shapeshifting, all connected CVPs in a structure compare the geometric differences between its initial shape and new shape. Then, each CVP determines if it stays in the same spot and if it needs to move. Each moving CVP is then assigned a time to disassemble and a new position in the new shape.

Each CVP uses a custom trajectory-planning technique to compute a way to reach its target position without interruption, while optimizing the route for speed. To do so, each CVP precomputes all collision-free regions around the moving CVP as it rotates and moves away from a stationary one.

After precomputing those collision-free regions, the CVP then finds the shortest trajectory to its final destination, which still keeps it from hitting the stationary unit. Notably, optimization techniques are used to make the whole trajectory-planning process very efficient, with the precomputation taking little more than 100 milliseconds to find and refine safe paths. Using data from the GPS and IMU, the coordinator then estimates its pose and velocity at its center of mass, and wirelessly controls all the propellers of each unit and moves into the target location.

In their experiments, the researchers tested three-unit CVPs, consisting of one coordinator and two workers, in several different shapeshifting scenarios. Each scenario involved one CVP unlatching from the initial shape and moving and relatching to a target spot around a second CVP.

Three CVPs, for instance, rearranged themselves from a connected straight line — where they were latched together at their sides — into a straight line connected at front and back, as well as an “L.” In computer simulations, up to 12 roboat units rearranged themselves from, say, a rectangle into a square or from a solid square into a Z-like shape.

Experiments were conducted on quarter-sized roboat units, which measure about 1 meter long and half a meter wide. But the researchers believe their trajectory-planning algorithm will scale well in controlling full-sized units, which will measure about 4 meters long and 2 meters wide.

In about a year, the researchers plan to use the roboats to form into a dynamic “bridge” across a 60-meter canal between the NEMO Science Museum in Amsterdam’s city center and an area that’s under development. The project, called RoundAround, will employ roboats to sail in a continuous circle across the canal, picking up and dropping off passengers at docks and stopping or rerouting when they detect anything in the way. Currently, walking around that waterway takes about 10 minutes, but the bridge can cut that time to around two minutes.

“This will be the world’s first bridge comprised of a fleet of autonomous boats,” Ratti says. “A regular bridge would be super expensive, because you have boats going through, so you’d need to have a mechanical bridge that opens up or a very high bridge. But we can connect two sides of canal [by using] autonomous boats that become dynamic, responsive architecture that float on the water.”

To reach that goal, the researchers are further developing the roboats to ensure they can safely hold people, and are robust to all weather conditions, such as heavy rain. They’re also making sure the roboats can effectively connect to the sides of the canals, which can vary greatly in structure and design.

ARCHIVE: An autonomous fleet for Amsterdam

ARCHIVE: Autonomous boats can target and latch onto each other