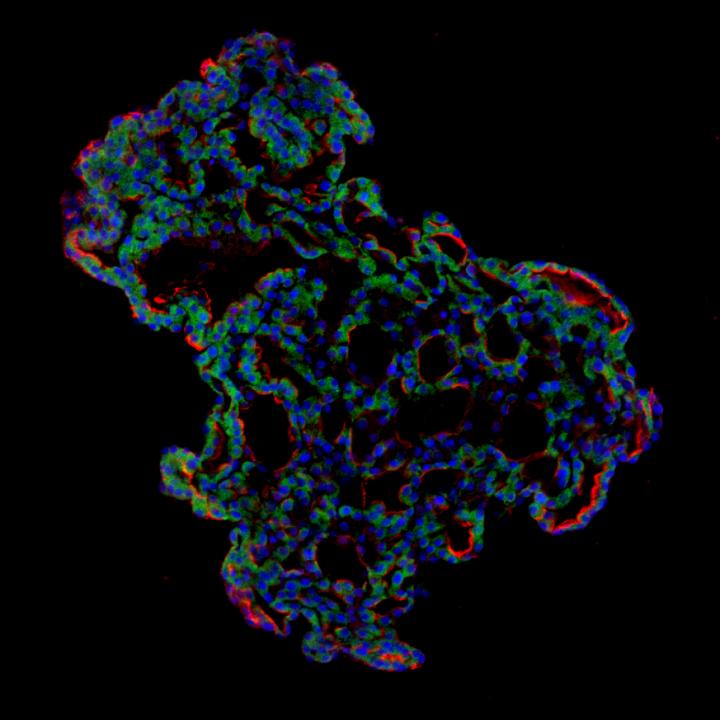 ‘Mini-lungs’ grown from tissue donated to Cambridge hospitals has provided a team of scientists from South Korea and the UK with important insights into how COVID-19 damages the lungs. Writing in the journal Cell Stem Cell, the researchers detail the mechanisms underlying SARS-CoV-2 infection and the early innate immune response in the lungs.

To date, there have been more than 40 million cases of COVID-19 and almost 1.13 million deaths worldwide. The main target tissues of SARS-CoV-2, the virus that causes COVID-19, especially in patients that develop pneumonia, appear to be alveoli – tiny air sacs in the lungs that take up the oxygen we breathe and exchange it with carbon dioxide to exhale.

To better understand how SARS-CoV-2 infects the lungs and causes disease, a team of scientists from the UK and South Korea turned to organoids – ‘mini-organs’ grown in three dimensions to mimic the behaviour of tissue and organs.

Dr Joo-Hyeon Lee, co-senior author, and a Group Leader at the Wellcome-MRC Cambridge Stem Cell Institute, University of Cambridge, said: “We still know surprisingly little about how SARS-CoV-2 infects the lungs and causes disease. Our approach has allowed us to grow 3D models of key lung tissue – in a sense, ‘mini-lungs’ – in the lab and study what happens when they become infected.”

The team infected the organoids with a strain of SARS-CoV-2 taken from a patient in South Korea who was diagnosed with COVID-19 on 26 January 26 2020 after traveling to Wuhan, China. Using a combination of fluorescence imaging and single cell genetic analysis, they were able to study how the cells responded to the virus.

When the 3D models were exposed to SARS-CoV-2, the virus began to replicate rapidly, reaching full cellular infection just six hours after infection. Replication enables the virus to spread throughout the body, infecting other cells and tissue.

Around the same time, the cells began to produce interferons – proteins that act as warning signals to neighbouring cells, telling them to activate their antiviral defences. After 48 hours, the interferons triggered the innate immune response – its first line of defence – and the cells started fighting back against infection.

Sixty hours after infection, a subset of alveolar cells began to disintegrate, leading to cell death and damage to the lung tissue.

Although the researchers observed changes to the lung cells within three days of infection, clinical symptoms of COVID-19 rarely occur so quickly and can sometimes take more than ten days after exposure to appear. The team say there are several possible reasons for this. It may take several days from the virus first infiltrating the upper respiratory tract to it reaching the alveoli. It may also require a substantial proportion of alveolar cells to be infected or for further interactions with immune cells resulting in inflammation before a patient displays symptoms.

“Based on our model we can tackle many unanswered key questions, such as understanding genetic susceptibility to SARS-CoV-2, assessing relative infectivity of viral mutants, and revealing the damage processes of the virus in human alveolar cells,” said Dr Young Seok Ju, co-senior author, and an Associate Professor at Korea Advanced Institute of Science and Technology. “Most importantly, it provides the opportunity to develop and screen potential therapeutic agents against SARS-CoV-2 infection.”

“We hope to use our technique to grow these 3D models from cells of patients who are particularly vulnerable to infection, such as the elderly or people with diseased lungs, and find out what happens to their tissue,” added Dr Lee.

The research was a collaboration involving scientists from the University of Cambridge, UK, and the Korea Advanced Institute Science and Technology (KAIST), Korea National Institute of Health, Institute for Basic Science (IBS), Seoul National University Hospital and GENOME INSIGHT Inc. in South Korea.