Site 1 sodium channel blockers such as tetrodotoxin and saxitoxin are small-molecule drugs with powerful local anesthetic properties. They provide pain relief without toxic effects on local nerves and muscles, and are an attractive alternative to opioids. But injected by themselves, they can easily float away, causing severe systemic toxicity. 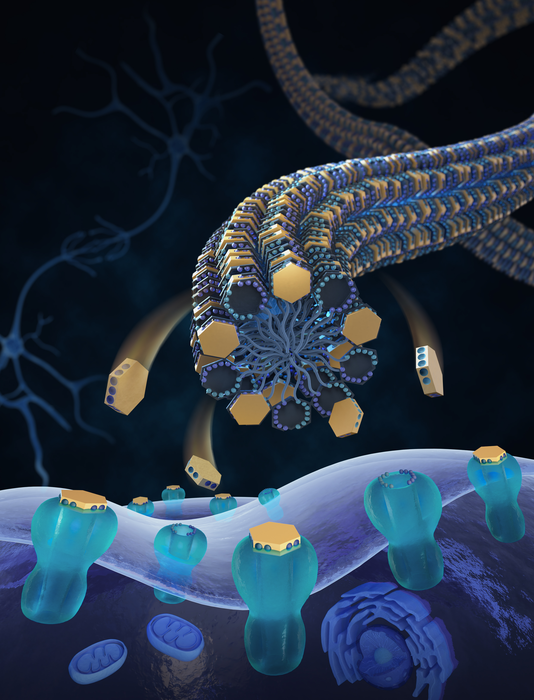 Site 1 sodium channel blockers such as tetrodotoxin and saxitoxin are small-molecule drugs with powerful local anesthetic properties. They provide pain relief without toxic effects on local nerves and muscles, and are an attractive alternative to opioids. But injected by themselves, they can easily float away, causing severe systemic toxicity.

Encapsulating these drugs in safe delivery systems has been a challenge: Because they are extremely water soluble, they tend to exit into the surrounding water in the body.

“The toxicity becomes dose-limiting, and you can’t get a long-lasting nerve block,” says Daniel Kohane, MD, PhD, director of the Laboratory for Biomaterials and Drug Delivery at Boston Children’s Hospital and vice chair for research in the Department of Anesthesiology, Critical Care and Pain Medicine.

Tianjiao Ji, PhD, a former postdoc in Kohane’s lab, had an idea for a biomimetic system that would release local anesthetics slowly, prolonging their effect. As described in the September issue of Nature Biomedical Engineering, the system mimics the body’s own receptors for the anesthetic. The mimics grab onto the drug and the system, once in place, slowly releases the anesthetic, providing prolonged nerve blockade with minimal toxicity.

The Kohane lab has created many slow-release systems, including ones to deliver tetrodotoxin, but this one is the first to hijack nature’s design. Although tetrodotoxin and saxitoxin were the test anesthetics, the approach could potentially be applied to other drug delivery systems.

To create the slow-release system, Ji, with co-first author Yang Li, PhD, and other lab members, began with a mixture of two peptide sequences, P1 and P2. Both peptides are part of the actual sodium ion channel; when tetrodotoxin is delivered to the nerve, it binds simultaneously to both peptides.

“When you add the hydrophobic chains, the peptides form a long fiber with thousands of P1s and P2s waving around,” Kohane explains. “Each set of peptides binds one tetrodotoxin molecule. Think of the peptides like hands — if you’re trying to catch tetrodotoxin, you need two hands to come together to hold it.”

When this structure is injected near the target nerve, the tetrodotoxin slowly releases itself by diffusion and other processes, and binds to P1 and P2 on the nerve itself.

Putting the design to work

The team then put the tetrodotoxin-bearing nanostructures to the test, injecting them near the sciatic nerves of live rats. The anesthetic stayed in place longer than free tetrodotoxin, with no toxic tissue reaction, and neurobehavioral tests in the animals showed that the nerve block lasted for as long as 16 hours.

“By hijacking nature’s design, we created a synthetic receptor for anesthetic drugs that acts as a delivery and release system,” says Ji.

The team has patented their approach. “In theory, it could be applied to different drugs and other receptor–drug interactions,” Kohane says. (For information on licensing the technology, email [email protected])

The study was funded by the National Institutes of Health (R35 GM131728) and an Anesthesia Research Distinguished Trailblazer Award.

Boston Children’s Hospital is ranked the #1 children’s hospital in the nation by U.S. News & World Report and is the primary pediatric teaching affiliate of Harvard Medical School. Home to the world’s largest research enterprise based at a pediatric medical center, its discoveries have benefited both children and adults since 1869. Today, 3,000 researchers and scientific staff, including 9 members of the National Academy of Sciences, 23 members of the National Academy of Medicine and 12 Howard Hughes Medical Investigators comprise Boston Children’s research community. Founded as a 20-bed hospital for children, Boston Children’s is now a 415-bed comprehensive center for pediatric and adolescent health care. For more, visit our Answers blog and follow us on social media @BostonChildrens, @BCH_Innovation, Facebook and YouTube.