Globally, the coastal lagoons of Lagos (Nigeria), Sakumo (Ghana) and Bizerte (Tunisia) —close to large urban centres and without waste and sewage treatment systems— are among the most affected water ecosystems of this nature by microplastic pollution. However, the highest concentrations of microplastics have been detected in Barnes Sound and other small lagoons in a protected area in the north of Florida Bay (USA), a particular case that can be explained by the transport of microplastics carried by hurricanes from polluted areas. 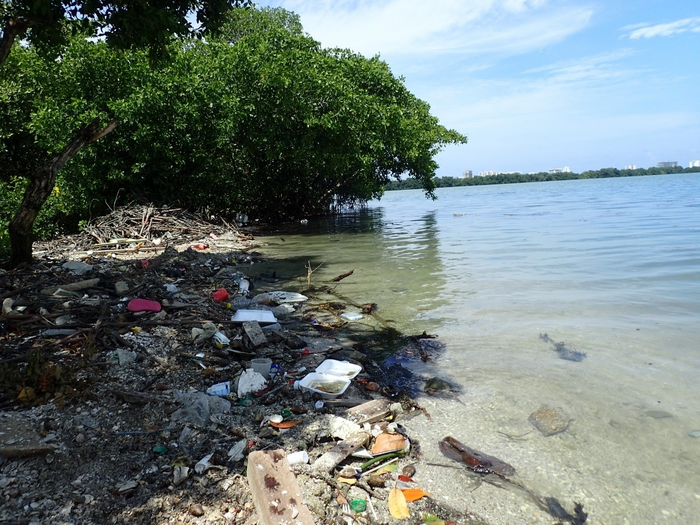 Globally, the coastal lagoons of Lagos (Nigeria), Sakumo (Ghana) and Bizerte (Tunisia) —close to large urban centres and without waste and sewage treatment systems— are among the most affected water ecosystems of this nature by microplastic pollution. However, the highest concentrations of microplastics have been detected in Barnes Sound and other small lagoons in a protected area in the north of Florida Bay (USA), a particular case that can be explained by the transport of microplastics carried by hurricanes from polluted areas.

These are some of the conclusions of a study published in the journal Environmental Pollution by PhD student Ostin Garcés-Ordóñez —led by Professor Miquel Canals, director of the Consolidated Research Group on Marine Geosciences of the Faculty of Earth Sciences of the University of Barcelona— and other co-authors. The article, which includes the participation of experts from institutions in Colombia and Chile, reviews the progress of the knowledge on microplastic pollution in coastal lagoons around the world and warns of the abundance of fibres and fragments of polyethylene, polyester and polypropylene in some of these valuable ecosystems.

Coastal lagoons are transitional ecosystems between inland and marine water systems. With a great ecological and socio-economic value, these habitats are also affected by the impact of human activities. The study reviews the published scientific literature on microplastic pollution in 50 coastal lagoons in 20 countries on different continents, namely Europe (32%), Asia (20%), Latin America and the Caribbean (18%), Africa (12%), North America (10%) and Oceania (8%).

Coastal lagoons are of great importance for biodiversity conservation. They are also the main providers of food and other ecosystem services to local —often vulnerable— populations that depend on them. 58% of these ecosystems have some form of national or international protection status (Ramsar Convention on wetlands of international importance, biosphere reserves, areas of importance for wildlife conservation, or others).

“In these natural habitats, peak levels of microplastic pollution result from a combination of several factors. For example, the residence time and water renewal rate of lagoons, the presence of large urban and industrial developments with insufficient waste management, river and outfall discharges, seasonal climate fluctuations, natural phenomena (hurricanes, typhoons, etc.) and the typology of microplastics”, says researcher Ostin Garcés-Ordóñez, a member of the Consolidated Research Group in Marine Geosciences and first author of the article.

Coastal lagoons with slow —or very slow— water turnover rates are the most susceptible to high microplastic pollution. In the case of the Mosquito Lagoon in Florida (USA), it takes 200-300 days to renew 50% of the water, and therefore microplastics entering this lagoon can remain in this ecosystem for considerable periods of time.

“During the rainy season, the concentration of microplastics also increases in surface water compared to the dry season, a phenomenon that has been observed in the lagoon of Rio Lagarto (Mexico) and in the Ciénaga Grande de Santa Marta (Colombia), with maximum levels in areas where the most intense human activities are recorded”, says Garcés-Ordóñez, also a member of the Colombian Institute of Marine and Coastal Research.

Fish fauna, which is of great commercial interest due to its exploitation for human consumption, is one of the best-studied groups of organisms in relation to the impact of microplastics. The study, which reviews the effects of pollution on 96 species, finds a maximum impact on fish in the lagoons of Bizerte and Ghar El Melh (Tunisia), especially the species Liza aurata and Sarpa salpa, with intakes of up to 65 microplastics per individual. Molluscs, with levels of up to 17 microplastics per individual, are another of the most affected groups, with maximum values detected in Eastern oysters (Crassostrea virginica) in the Mosquito Lagoon (USA).

The coastal lagoons of the Iberian Peninsula: data and predictions

Regarding the Iberian Peninsula, coastal lagoons are relatively few in number and small in comparison with other coastal lagoon systems in the world. Most of them are associated with the lower courses of rivers and their former mouths, as well as with the coastal drift of sediments, as is the case of the marshes of Empordà, the Ebro delta, the Valencia lagoon or the lagoon system of the Portuguese Algarve.

“The environmental state of these lagoons is variable and changes over time. Some suffer the effects of pollution from urban, industrial and agricultural sources, such as the Valencia lagoon and the Mar Menor in Murcia, where there have recently been massive deaths of fish due to episodes of anoxia”, notes Professor Miquel Canals, director of the UB Department of Earth and Ocean Dynamics and a leading member of the research team.

“The Mar Menor, which is the largest coastal lagoon in Spain, has unique characteristics among the Iberian coastal lagoons, given the high salinity of its waters as a result of its permanent communication with the open sea and the presence of several volcanic islets. Episodes of drought can have notable effects on some of these lake systems, as is already happening in the marshes of the Empordà or in Doñana”, Canals points out.

The study reveals the presence of microplastics in the water column, sediments and fish in the coastal lagoons of the Mar Menor (Murcia), the Pletera (Catalonia) and in Ria Formosa and Aveiro (Portugal). “In Spanish lagoons, an average of 20.1±2.9 microplastics per kilogram of the digestive tract has been found in sea bream (Sparus aurata) in the Mar Menor, and an abundance of up to 2.5 microplastics per individual in the eastern mosquitofish (Gambusia holbrooki) in the restored Pletera lagoon in Girona”, says Miquel Canals.

“In the Mar Menor —he continues— the average abundance would be 43.5 to 53.1 microplastics per kilogram of sediment according to two published studies, a value significantly lower than that found in the coastal lagoons of Venice and Sacca di Goro (Italy), Anzali (Iran), Bizerte (Tunisia) and Lagos (Nigeria), but higher than that detected in the Ria Formosa (Portugal)”.

In addition to accumulating in specific areas of lagoon ecosystems, microplastics can also end up in the sea and further aggravate the problem of ocean pollution.

“We can certainly say that the different environmental matrices of coastal lagoons —i.e. waters, sediments and organisms living in these habitats— are receptors of microplastics and are affected by the pollution they cause. However, we do not yet know to what extent coastal lagoons are ultimate sinks for microplastics,” says Canals.

“This is related to the characteristics and dynamics of each lagoon, as well as to the quantities and properties of incoming microplastics. Thus, some lagoons may be true sinks while others may function as temporary sinks in the microplastic cycle, easing, for example, their transfer from river systems to beaches and the marine environment. Such criteria could be used to classify coastal lagoons according to the balance between inward and, eventually, outward fluxes of microplastics”.

Objective: to prevent microplastics from entering the natural environment

The review published in the journal Environmental Pollution is based on studies that have combined different methodological approaches —direct visual inspection, chemical digestion, density separation— to study different habitats that may include coral reefs, seagrass beds, beaches and swamps.

“Our study shows the effort to improve microplastic sampling and identification methods: to determine the optimal sample size and avoid possible contamination, to apply staining techniques to optimise microplastic identification, and to reduce the costs of the different methodologies so that they can be applied to long-term monitoring programmes”, says Ostin Garcés-Ordóñez.

“In many parts of the world, research is limited by the limited availability of financial, human and infrastructure resources (e.g. Raman or Fourier-Transform infrared spectrometers to characterise the composition of plastic polymers)”, says Garcés-Ordóñez. “Extensively applying both simple and more advanced methodologies will answer many open questions about the dynamics of microplastics in these environments or the role of lagoons as temporary or permanent microplastic sinks”, he adds.

As Miquel Canals notes, “the best way to tackle and minimise the problem of microplastic pollution in general and in coastal lagoons specifically is to stop it from entering natural systems from the roots. It is necessary to act on the sources and the causes that favour their arrival in coastal lagoons and the rest of the ecosystems”.

Achieving this goal, or at least getting closer to it, would require a series of combined actions at global, regional, national and local levels. Firstly, to have an adequate regulatory framework and its effective implementation, and then to promote actions to minimise plastic waste generation at all levels (e.g. proper management of waste and wastewater discharged into aquatic ecosystems, and strategies to eliminate the accumulation of large waste in the environment, which can generate secondary microplastics, among others).

“It is obvious that these examples are only some of the existing options, which should also be accompanied by environmental education and monitoring programmes in order to be able to objectively assess their effectiveness. Other options, such as the recovery of microplastics from the natural environment, are not, for the moment, viable”, concludes Miquel Canals.

A systematic review on microplastic pollution in water, sediments, and organisms from 50 coastal lagoons across the globe