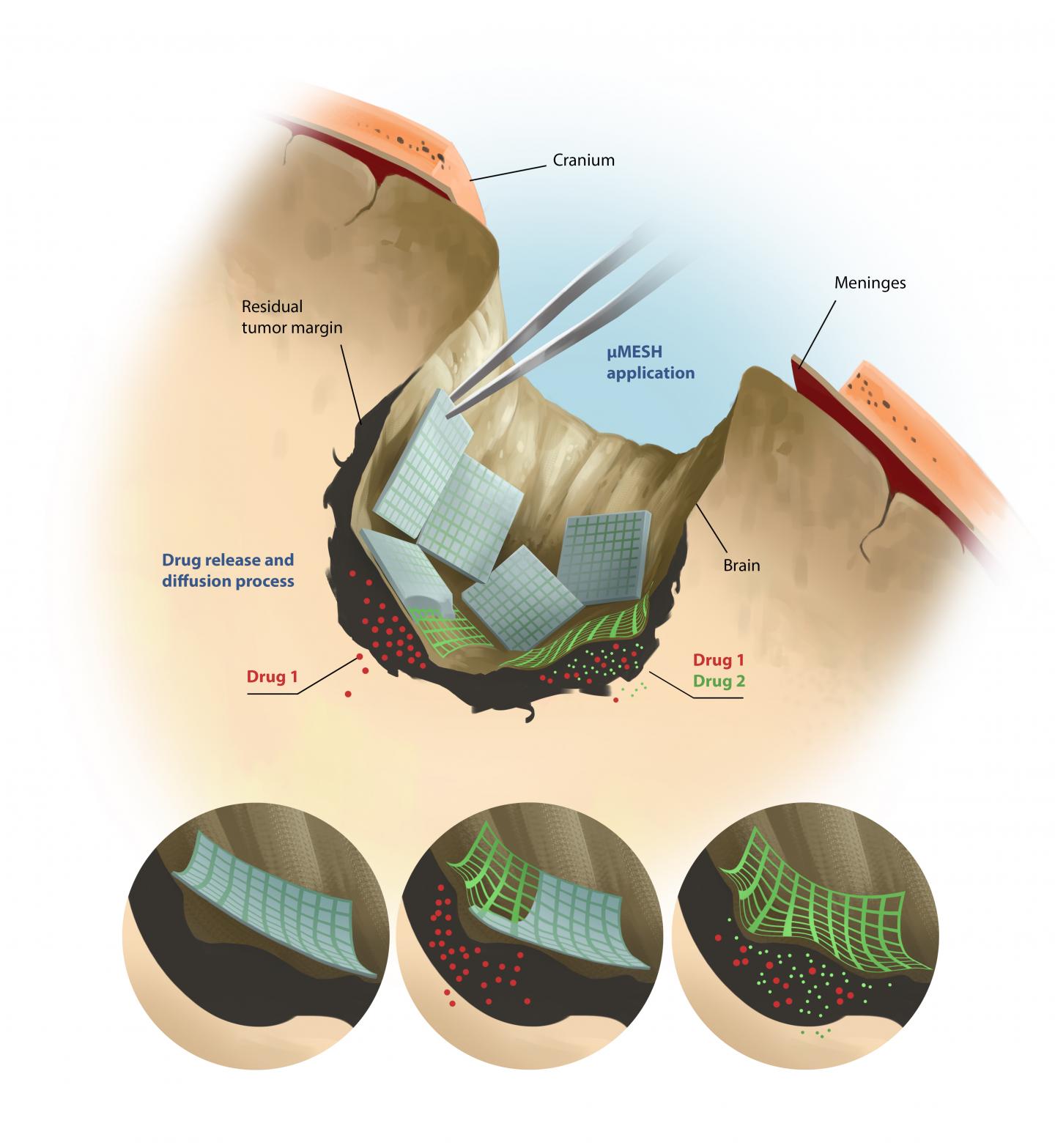 Genova (Italy), 16th April 2021 – A micro-sized polymeric net wrapping around brain tumors, just like a fishing net around a shoal of fish: this is the microMESH, a new nanomedicine device capable to conform around the surface of tumor masses and efficiently deliver drugs. It has been described by the researchers of the IIT – Istituto Italiano di Tecnologia (Italian Institute of Technology) in Nature Nanotechnology. The new biomedical implant has been validated in preclinical studies that demonstrate its effectiveness for the treatment of glioblastoma multiforme.

This work has been carried out by the group of Prof. Paolo Decuzzi, head of the IIT Laboratory of Nanotechnology for Precision Medicine, in collaboration with the Neural Stem Cell Biology Laboratory of Dr. Rossella Galli at the San Raffaele Hospital in Milan and the group of Prof. Gerald Grant at the Lucile Packard Children’s Hospital of Stanford University. The study was originated within the research activities conducted by Decuzzi in the context of projects supported by the European Research Council and the Marie Sk?odowska-Curie Action program.

Although they are quite rare, brain tumors are among the most aggressive and difficult to cure. In particular, glioblastoma multiforme is the tumor with the most severe prognosis: the average survival is just over 12 months and only 5% of the patients survive beyond 5 years. Glioblastoma multiforme typically affects men and women between 45 and 75 years of age. Furthermore, unlike other malignancies, there has been no significant diagnostic and therapeutic improvements for this malignancy over the past 30 years. In fact, both the incidence of new cases and the number of deaths has remained practically unchanged. The only therapeutic strategy currently used is based on surgery, which consists of removing a part of the tumor mass and reducing intracranial pressure, followed by radiotherapy and/or chemotherapy.

The biomedical system developed by IIT and its collaborators can play a very important role in the fight against the disease, representing a possible effective alternative to the few pharmacological treatments used to date.

The microMESH has the shape of a micrometric polymeric net, it is made with biodegradable materials and wraps around the tumor mass. In fact, the micrometric thick polymeric fibers are very flexible and are arranged to form regular openings, which are also micrometric, just like the size of cancer cells. This unique feature allows the microMESH to achieve a closer interaction with the tumor mass, increasing the therapeutic efficacy. Its structure consists of two separate compartments in which different drugs can be loaded which are released towards the tumor mass in an independent, precise, and prolonged fashion. The microMESH can ‘attack’ glioblastoma by combining different therapies: chemotherapy, nanomedicine, and immunotherapy.

Prof. Paolo Decuzzi and his collaborators, in particular Daniele Di Mascolo and Anna Lisa Palange, will continue to develop the microMESH by integrating different types of drugs and therapies to tackle other types of tumors. In the short term, their major objective will be to validate the technology on glioblastoma patients.