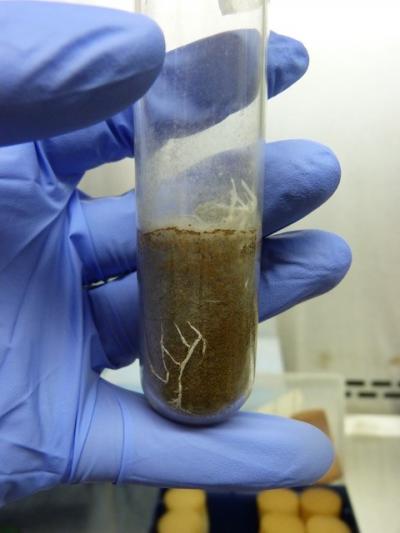 AMHERST, Mass. – In what they believe is the first study of its kind, researchers led by postdoctoral researcher Luiz A. Domeignoz-Horta and senior author Kristen DeAngelis at the University of Massachusetts Amherst report that shifts in the diversity of soil microbial communities can change the soil’s ability to sequester carbon, where it usually helps to regulate climate.

They also found that the positive effect of diversity on carbon use efficiency – which plays a central role in that storage – is neutralized in dry conditions. Carbon use efficiency refers to the carbon assimilated into microbial products vs carbon lost to the atmosphere as CO2 and contributing to climate warming, DeAngelis explains. Among other benefits, soil carbon makes soil healthy by holding water and helping plants grow.

She and colleagues addressed these questions because they point out, “empirical evidence for the response of soil carbon cycling to the combined effects of warming, drought and diversity loss is scarce.” To explore further, they experimentally manipulated microbial communities while varying factors such as microbe community species composition, temperature and soil moisture. Details are in Nature Communications.

In addition to first author Domeignoz-Horta and others at UMass Amherst, the team includes Serita Frey at the University of New Hampshire and Jerry Melillo at the Ecosystems Center, Woods Hole, Mass.

They point out that carbon in the soil is regulated in part by the rate and efficiency with which the microbes living there can use fresh plant foods and other parts of soil organic matter to grow. DeAngelis says some “soil carbon pools” can “stick around for decades and turn over very slowly. These are ones we really want to have because they help soil stay spongy to absorb water and help bind and release nutrients for plant growth.”

“Diversity is interesting, not just in microbiology but in all organisms, including humans,” DeAngelis says. “It’s controlled by a lot of different factors, and it seems that more diverse systems tend to work more efficiently and to tolerate stress better. We wanted to understand the role of microbial diversity in soil carbon efficiency.”

She adds, “Replicating diversity is tricky, which is why we used a model system soil. Luiz extracted microbes from soil, made serial dilutions of microbe concentrations in a buffer and inoculated the soil to get variation in diversity.” They let the five different microbial mixes grow for 120 days. In addition to other tests, they used a new method based on a heavy, stable isotope of water known as 18O-H2O. It allowed them to trace the oxygen and track new growth over time in the different diversity, soil moisture and temperature conditions.

“One interesting thing we found is that we do see that more diverse communities are more efficient. The microbes grow more than in less diverse communities, but that increase in growth with diversity is lost when they are stressed for water. This suggests that there’s a limit to the stress resilience with high diversity,” she adds.

The authors point out, “Results indicate that the diversity by ecosystem-function relationship can be impaired under non-favorable conditions in soils, and that to understand changes in soil carbon cycling we need to account for the multiple facets of global changes.”

DeAngelis adds, “We were a little surprised at how our approach worked so well. I’m really interested in the temperature/moisture efficiencies and Luiz is more interested in the diversity angle. It was a combination of the two that was the most interesting result.”